I want to eat at a diner.

Not just any diner. I want to eat at the one Richard Jones goes to.

He doesn’t say much about the food, but the people are enough to satisfy. It’s mostly about what they’re doing while they’re there. It’s what, in an ideal world, everyone should be doing.

Let’s face it. Poetry for the masses is odd fodder. When was the last time you saw a book of poetry at the grocery store, the corner newsstand, places where everyone frequents on a daily basis? Shouldn’t it be easier to find, considering the essential nourishment it contains?

You and I know that lots of good poetry is being written these days. But who’s reading it? Mainly other poets, students, teachers, or people holed up in the ivory towers of academia — people Dana Gioia classified as a subculture. What about the rest of us?

Take my husband, Len, for example. He’s an educated professional, a responsible, upstanding citizen. He’s practical, unfailing in his loyalty to family and friends, a person who does so much, yet asks for so little. And most important, he has a good heart.

But does he read poetry? I’d sooner find him twirling around the house in a tutu and bunny slippers. Don’t misunderstand. Len appreciates the arts. He reads voraciously. But to him, most poetry isn’t entertaining, enriching or informative. It’s too abstract, too erudite.

You and I know that he’s right in some ways. We’ve all encountered poems we couldn’t understand, couldn’t relate to, simply didn’t like. I’ve plowed through many volumes of mediocre poetry, exasperated at my inability to stake common ground.

But the really good poems? So sublime you could weep for the beauty, depth and power of those words, wondering how a mere human being, using 26 letters of the alphabet, could express what you’ve harbored in the depths of your soul without you even being conscious of it. Those are the poems I want everyone to feast on.

Do you think poetry is such a precious commodity, that if it became part of mainstream culture, it would become tainted, diluted? Will it forever remain an acquired taste?

Do you ever wish it could be served up in diners, available 24 hours a day, its titles sung out in colorful diner lingo, instead of being rationed out like rarefied hors d’oeuvres to be savoured only by those with advanced degrees?

Richard Jones, Professor of English at DePaul University in Chicago, and Editor of Poetry East since 1979, is committed to poetry that is “immediate, accessible, and universal.” After reading “The Diner,” I was reminded of what William Carlos Williams said:  “It is difficult to get the news from poems, yet men die every day for lack of what is found there.” I know poetry isn’t everybody’s cup of tea, but shouldn’t it at least be on the menu?

THE DINER
by Richard Jones 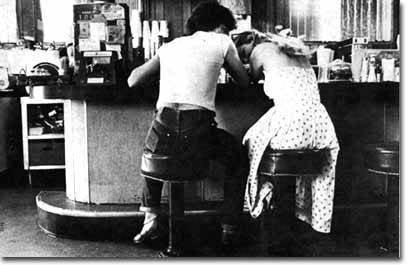 The short-order cook and the dishwasher
argue the relative merits
of Rilke’s Elegies
against Eliot’s Four Quartets,
but the delivery man who brings eggs
suggests they have forgotten Les fleurs
du mal and Baudelaire. The waitress
carrying three plates and a coffeepot
can’t decide whom she loves more —
Rimbaud or Verlaine,
William Blake or William Wordsworth.
She refills the rabbi’s cup
(he’s reading Rumi),
asks what he thinks of Arthur Waley.
In the booth behind them, a fat woman
feeds a small white poodle in her lap,
with whom she shares her spoon.

Today’s Poetry Friday Roundup is at A Wrung Sponge.

24 thoughts on “friday feast: the diner by richard jones”