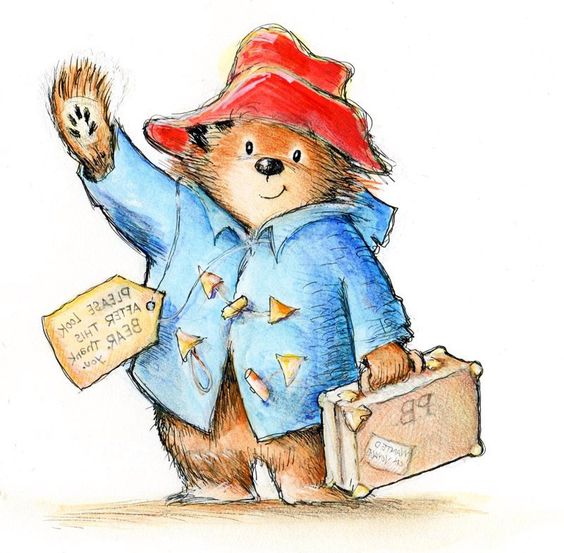 Happy November!  So glad you’re here.  Have you ever seen such beautiful snow?

Today, my beary special guest is the one and only children’s book illustrator and Paddington Bear portraitist, R.W. Alley!

Can you believe it? I am so delighted, thrilled, and honored that he agreed to drop by, talk about his 2007 Robert’s Snow: For Cancer’s Cure snowflake, and let us in on what he’s been up to lately. The 28 resident Paddingtons even brushed their fur to welcome the talented illustrator who was born right here in Virginia, gained international recognition for his Paddington pictures, and who, admittedly, has never stopped being ten years old.

You are probably familiar with Michael Bond’s thirteen novels documenting the endearing ursine who came to live with the Brown family at 32 Windsor Gardens, London. You may also know that Peggy Fortnum was the first to draw Paddington’s likeness, and that there have been at least four other artists who have followed suit. But in 1997, R.W. Alley was selected to carry on Paddington’s legacy by illustrating a series of PB picture books. As an avid bear collector and diehard Paddington fan, I must say that no one else has drawn Paddington quite as well as he does.

Why? Because it’s a lot more than a duffle coat, floppy hat, black ears and Wellington boots. The real challenge lies in infusing the pictures with energy, capturing facial expressions which really nail Paddington’s personality, and pinning down a much beloved bear long enough to allow his readers to truly internalize him. Hats off to Robert Whitlock Alley! Thanks to his pictures, Paddington has never been more loveable, more mischievous, more irresistible.

Though Paddington usually takes center stage, Bob Alley has illustrated over one hundred  picture books, easy readers, chapter books and poetry collections for other authors, such as Larry Dane Brimner, Andrew Clements, Jean Van Leeuwen, Claudia Mills, and Susan Katz. He has also self-illustrated about a dozen other titles: The Clever Carpenter (Random House, 1988) and There Once Was a Witch (HarperFestival, 2003), to name just two. Such is the prodigious output of the former Haverford art history student who spent class time “doodling in the margins and dreaming up stories.”

These days, Bob Alley lives in Barrington, Rhode Island, with his lovely wife, Zoe, and their two children, Cassie and Max. He can usually be found in his garage studio, happily working in his slippers.

Jama:  Welcome, Bob! Let’s begin by talking about your snowflake. Where does the drawing come from?

“Paddington at Paddington Station, London,” will be featured in Auction 3, December 3-7, 2007.

Bob:  This drawing is from the title page of the newest Paddington picture book. The book is in full color, but since Paddington was first illustrated in pen and ink, and since his 50th anniversary is being celebrated with a new novel decorated with pen and ink drawings by me, I thought this was an appropriate image for the snowflake. Sort of retro. Very popular these days.

Jama: How does Paddington feel about being on a snowflake?

Bob:  I would imagine he’s long ago given up worrying about what his image decorates. Some purposes must strike him as rather odd. But, for Robert’s Snow, I’m sure he’s more than happy to participate.

Jama:  At least five other artists before you have drawn his likeness. How did you go about creating a fresh look for Paddington, so that he would both look like himself, and at the same time, be drawn in your own distinctive style?

Bob:  Luckily Paddington’s look is rather distinctive. Hat, duffle coat, Wellington boots and black ears. So I had no real need to change my usual drawing style.

Jama:  Are the Browns, Mrs. Bird, or Mr. Gruber modeled on real people? If so, who?

Bob:  Visually, the Browns and Mrs. Bird pretty much follow their traditional look as described by Mr. Bond. As for Mr. Gruber, he does have a passing resemblance to Mr. Bond. This is purely coincidental and probably indicates a lack of imagination on my part.

Jama:  Could you tell us about the new Paddington picture book that was released this year? How does it compare to the 1998 version?

Bob:  The new picture book has a slightly revised text and a brighter color scheme. It’s also a little larger.

Jama:  Any other special Paddington books coming out in 2008, especially for his birthday?

Bob:  There are a variety of new Paddington books coming out for the 50th. There are a few titles for the youngest readers. And very importantly, a new novel. It’s really in the novels that you get full measure of the bear.

Jama:  Please tell us about meeting Michael Bond for the first time. Did you have to pass a rigorous test before he approved you as PB’s illustrator?

Bob:  I did have to do some preliminary drawings for Mr. Bond’s approval. These were dreadful and based entirely on what had come before. I then read all the novels and came quickly to understand what I had missed. Paddington is about personality, not hat, coat and boots. From then on, it has been pretty straightforward. Also, Mr. Bond is a very gracious and understanding fellow. 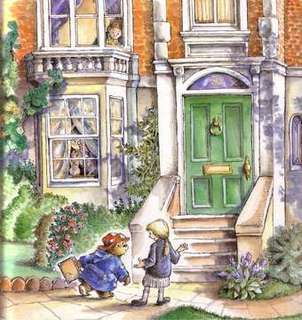 Jama:  It is evident from your drawings that, a) you know PB inside and out, b) you are quick and intuitive since you can keep up with him, and c) he has bribed you with expensive marmalade because you make him look handsome all the time. After drawing him so many times in so many books, have you become one with him?

Bob:  Actually it’s very important to keep your distance from the figures you’re drawing. In all my books, I think of myself as a reporter of the events of the text, not a participant in them. This helps the clarity of the drawings. 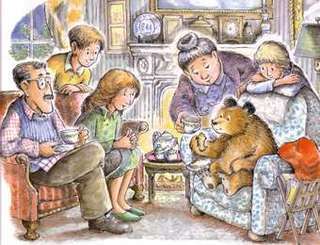 Jama:  Do you have a Paddington stuffed bear in your studio that you use as a model?

Bob:  Just as many illustrators have drawn Paddington, many toymakers have made stuffed likenesses in a variety of styles. I had collected a few of these with the original idea that they might come in handy to draw from. That was before I fully understood that stories are all the inspiration I needed.

Jama:  Did you have a teddy bear as a child?

Bob:  I had two teddy bears as a small child. Only one has survived and now resides in our daughter’s room. He is a little threadbare and has been repaired many times.

Jama:  Rumor has it that you and your wife, Zoe, are collaborating on a new book, There’s a Wolf at the Door, to be published in Fall 2008. What can you tell us about this story?

Bob:  The rumor is happily true. Roaring Brook will be publishing Zoe’s first book. It’s a big book in panel format. And, most importantly, it’s smart and silly. Every house should have a copy.

Jama:  What is it like to collaborate with your wife? When she tells you to change something, do you agree?

Bob:  Since There’s a Wolf at the Door is in a panel format, there could have been a lot of back and forth about balancing words and pictures. But there wasn’t. Zoe wrote out the text in longhand, typed it up and gave it to me, saying, “OK, your turn.” The only concession she made to the format was to eliminate any scenic detail. The manuscript reads pretty much like a playscript. After I’d completed the sketches, we went over it all — correcting my handlettering for content and shameful spelling and making sure the pictures made sense. It all worked out very well.

Jama:  You are primarily a pen and ink artist (with watercolor). Is it safe to assume that you do not use the computer to make your pictures?

Bob:  The computer is great for copying drawings and making printing plates. I have never used it for creating pictures. I rely way too much on the little and big accidents of line and color that happen when you make art by hand.

Jama:  Now for some tasty questions. Do you like to cook? What do you usually eat for breakfast?

Bob:  I’m not a cook. I make breakfast, but I don’t really cook breakfast. Except maybe scrambled eggs. And bacon in the microwave. And, coffee. I consider a good cup of coffee a fine breakfast.  Zoe is the cook. She’s very clever and various in her dishes and she knows better than to let me anywhere near real food preparation.

Jama:  What food inspires you to do your best work?

Bob:  Nothing really pops to mind. I like lobster. But, I usually eat too much and that makes me sleepy.

Jama:  If you could lunch with any classical painter, whom would you invite? What would you ask him/her?

Bob:  I think I’d pick John Constable (English landscape painter of the 1700’s), and ask him what moved him to paint the scenes of the countryside in the way he did. His style of putting paint on canvas was unusual and led directly to the Impressionist painting style. But, that was in France. So, what happened to the other English painters? I have an Art History BA, so I can ask questions like that.

For more information about R.W. Alley, visit his wonderful website. Make sure you read these delightful interviews with R.W. Alley, Michael Bond, and Paddington himself, courtesy of HarperCollins publishers.

My personal favorites of the many non-Paddington books Bob Alley has illustrated:

1. Ziggy’s Blue Ribbon Day, by Claudia Mills (FSG, 2005). The emotions of a little boy who hates track and field, but who loves to draw, traced in perfect scenes.

2. This is the House That Was Tidy and Neat, by Teri Sloat (Holt, 2005). A humorous cumulative tale with a decidedly Edwardian flavor.

3. Mrs. Brown on Exhibit, and other Museum Poems, by Susan Katz (Simon and Schuster, 2002). Poems about trains, clocks, butterflies, and dinosaurs explode in hilariously detailed scenes, thanks to vigorous pen and ink callisthenics.

4. Dear Santa: The Letters of James B. Dobbins, by Bill Harley (HarperCollins, 2005). This collection of handwritten letters nestled amongst busy holiday activities is true artistic genius.

Here are the other illustrators being featured today:

Daily updates and direct links to these posts can be found at 7-Imp, as well as a comprehensive list of all illustrator features. Visit the Robert’s Snow Auction Site to see all the snowflakes and to read the story behind this unique fundraising event.