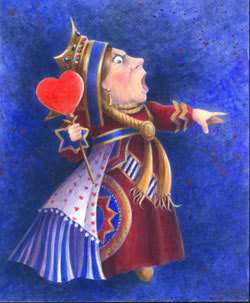 The Queen of Hearts
She made some tarts,
All on a summer’s day;

The Knave of Hearts,
He stole the tarts
And took them clean away.

The King of Hearts
Called for the tarts
And beat the knave full sore;

The Knave of Hearts
Brought back the tarts
And vowed to steal no more.

I can’t believe he thought he could get away with it. But I guess knaves will be knaves.

Welcome to Day 4 of my Children’s Book Week Celebration featuring recipes inspired by Mother Goose. Just for you, I have once again thrown caution to the wind in order to bring you the real stories behind the seemingly innocent rhymes we all learned as children. At least for me, peas and pumpkins will never be the same.

The Queen of Hearts first appeared in print in the European Magazine (1782). The rhyme actually had three more stanzas which were normally not printed because they were deemed too bawdy for children. (Here we go.) Although the Queen of Hearts was included in some nursery rhyme collections, she didn’t become well known until Lewis Carroll included her in Alice in Wonderland, published in 1805. He depicted her as a playing card with an attitude. Very clever, indeed.

The Queen was always grumpy and liked to play croquet, using a flamingo as a mallet and a hedgehog for a ball. She liked to say, “Off with his head!” at anything that moved. When she saw three gardener cards painting white roses red, she demanded that their heads be cut off. She wanted the same thing for the Cheshire Cat, even though his was only a floating head. Basically, she wanted everybody’s head cut off. It could have been a PMS thing.

And when the knave stole the tarts? She demanded that he be sentenced before the trial. Kind of like having dessert before the meal.

So just who was this Queen, really? Historians, of course, disagree. Some say she was actually Elizabeth, granddaughter of Mary Queen of Scots. Others say the Queen could have been Judith from the Bible. But these speculations fail to take into account the Queen’s appearance on playing cards, which date back to 1650. These early French decks contained illustrations of kings and queens over 100 years before the rhyme appeared, so it seems unlikely that the Queen of Hearts was based on an actual queen from history.

Evidence is different for the knave, though. Apparently he was a French rapscallion named Etienne de Vignoles. Just your typical pillager, gambler, and mercenary, who appeared in many funny nonsense rhymes. Not someone you’d want your daughter to marry. Unless he swore off tarts.

Speaking of which, I have found the perfect recipe! It comes from Ruth Ann Zaroff’s Alice in Wonderland website. She calls it “the Queen’s secret recipe.” Apparently, if made correctly, they are good enough to steal. Make these for someone you love.

THE QUEEN OF HEARTS’ STRAWBERRY TART
(makes one 9″ pie)

1. Preheat oven to 400 degrees. Mix all crust ingredients and pat into a 9″ pie plate. Prick the bottom with a fork and bake for about 15 minutes, or until lightly browned. Cool.

2. Arrange whole strawberries in the crust.

3. In a saucepan, cook water, sugar, and corn starch until the mixture becomes clear. Add gelatin and stir until dissolved. Add food coloring. Pour over the strawberries that are in the crust. Chill well.

4. Top with whipped cream before serving.

9 thoughts on “my life for a tart”