Welcome to a special edition of Poetry Friday, honoring the work of Bob Dylan!

The idea for this celebration came from my November 2007 post about “The Diner,” by Richard Jones. I was lamenting the inaccessibility of some poetry, and, in general, wishing that it wasn’t an art form primarily cultivated by a subculture of students, teachers, aesthetes, or other poets. In Jones’ poem, the people at the diner toss names like Baudelaire, Rilke, and Rumi around in their small talk. Poetry is second nature, essential food. Every man’s food.

Rich and famous artist/writer Kevin Slattery and I agreed that Dylan would probably hang out at this diner, since they were talking about Rimbaud and Verlaine, two of his early influences. It would be a natural stop for this lonesome traveler, who once said, “I consider myself a poet first, and a musician second. I live like a poet, and I’ll die like a poet.”

Don’t let his craggy singing voice deter you from appreciating his singular accomplishment — 600+ songs which define the last five decades of American culture, blending elements of narrative, chant, ballad, free verse, lament, epic, nonsense rhyme, folk, jazz, blues, country, et. al. It all comes down to the writing, which has earned him several nominations for the Nobel Prize in Literature.

Yes, I am a thief of thoughts
not, I pray, a stealer of souls
I have built an rebuilt
upon what is waitin
for the sand on the beaches
carves many castles
on what has been opened
before my time
a word, a tune, a story, a line
keys in the wind t unlock my mind
an t grant my closet thoughts back yard air . . .

no I must react an spit fast
with weapons of words
wrapped in tunes
that’ve rolled thru the simple years
teasin me t treat them right
t reshape them an restring them
t protect my own world
from the mouths of all those
who’d eat it . . .

*At this very moment, the self-proclaimed Archbishop of Anarchy is in Buenos Aires, Argentina, where he’ll be performing tomorrow night.

1. I’d love to hear your Dylan musings, but posts about songs or poems by anyone else are perfectly fine (we’ve got lots of seating here, and the tables are wide). Leave your link with Mr. Linky, below, with a comment.

2. Those of you posting about Dylan will automatically be entered into a drawing to win this 2-disc DVD:

This is Martin Scorsese’s 2005 documentary tracing Dylan’s early days in Greenwich Village through 1966, when he was famously booed on his world tour for going electric. There is a lot of fascinating commentary from the reclusive Dylan himself (he smiles! he’s human! he says his first two girlfriends, Gloria and Echo, brought out the poet in him! Why didn’t I know his eyes were so blue?!).

3. Check out my Wednesday post about “Like a Rolling Stone,” to find out why this is the one song I would take with me if I were banished to a desert island.

4. Big thanks to Jules of 7-Imp for this anecdote from singer Sam Phillips, whose daughter, Simone, upon hearing Dylan for the first time, asked, “Mommy, is that God singing?” When asked why she thought that, Simone answered, “Because his voice is funny, and it doesn’t make me laugh.” Oh, yeah!

Thanks for dining with us (jingle, jangle). I’ll try to round everybody up by the end of the day. 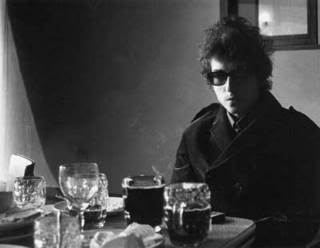 Here are the sounds that are filling the diner today:

Mother Reader is full of bright lights and the big city of Las Vegas with her take on The King.

Kelly over at Big A Little a is looking forward to her favorite season with a beautiful poem by Mary Jo Salter and a Dylan favorite which perplexes her, “One More Cup of Coffee for the Road.”

John from the Book Mine Set shares the Dylan classic, “The Times They Are a Changin,'” and a very cool original poem about the northern lights.

Susan at Wizards Wireless has been sharing Pooh and friends with her son (yay, bears)!

You must check out Tiel Aisha Ansari’s original poem, “Perpetual Amazement,” at Knocking from Inside. Wow!

Over at Wild Rose Reader, Elaine is leaping into spring with two original acrostics and a bounty of poetry collections and picture books written in verse. At the Blue Rose Girls, Elaine has posted “When I am Asked,” by Lisel Mueller (one of my favorites)!

Ready for a Poetry Friday Mash-up? Tricia at The Miss Rumphius Effect is celebrating Pi Day, Einstein’s birthday, and a wistful Dylan masterpiece, “Every Grain of Sand.”

Here’s the perfect chance to make friends with Sara Lewis Holmes, who’s sharing Dylan’s “All I Really Wanna Do,” at Read Write Believe.

At A Year of Reading, Mary Lee shares a beautiful sunrise with her original, “Daylight Savings Time.”

New to Poetry Friday, Kathy from The Brain Lair, is all about school with Tom Wayman.

writer2B is reminded of a Sunday School friend upon discovering Dylan’s comic gem,”Ugliest Girl in the World.”

Tadmack at Finding Wonderland has posted “Permanence,” by Lawrence Raab — such a gorgeous poem!

At destined to become a classic, Madame T has penned, “I went to war and all I got was this lousy license plate.” Not Dylan, but in the same spirit!

Laura Salas shares an excerpt from her article, “How Poems are Gathered and Published,” and she’s written an original poem about Dylan (love it!) as part of her weekly 15 Poems or Less feature.

Thanks to Chris at book-a-rama for a dose of Dylan’s “Mississippi.”

cloudscome at A Wrung Sponge has discovered a new Irish poet, Eavan Boland, and her favorite Dylan lyric for today is “God Knows.”

At Doing the Write Thing!, Marianne is into snowshoe hares with a poem by Nancy White Carlstrom.

Getting ready for National Poetry Month, Sylvia at Poetry for Children, has posted “Javier,” by Kathi Appelt, along with some ideas about how to celebrate during the month of April.

The queen of coffee, Karen Edmisten, has composed a shockingly clever poem called, “It Ain’t Me, Bob.” Dylan does have a way of inspiring women, to be sure!

Shelf Elf shares her love of museums and Lee Bennett Hopkins’ anthology, Behind the Museum Door, with an excerpt from “The Moccasins,” by Kristine O’Connell George.

Dive into the sea with Susan’s review of Sea Stars: Saltwater Poems, by Avis Harley and Margaret Butschler over at Chicken Spaghetti.

Christine discovered that she knew a lot more Dylan songs than she thought at The Simple and the Ordinary. She graces us with an excerpt from “Blowin’ in the Wind.”

Liz in Ink is waxing romantic today with thoughts of Bob, Joan Baez and those heartbreaking “Boots of Spanish Leather.”

For some substantial Tennyson, visit Michele at the Scholar’s Blog.

Prepare to be amazed and impressed by Kevin Slattery’s visual poem, “When I Paint My Masterpiece,” a retrospective gallery showing of all his Dylan-inspired work!

Jill at The Well-Read Child has us pondering Dylan’s “Every Grain of Sand.”

Get into the ring with Kelly at Writing and Ruminating — she offers a beautiful review of Charles R. Smith, Jr.’s new verse biography of Muhammed Ali, Twelve Rounds to Glory.

Cozy up at Becky’s Book Reviews — she’s got 2 videos of “Mr. Tambourine Man,” and of course, all the lyrics.

You’ll find a nice review of Poems in Black and White by Kate Miller, at  What Adrienne Thinks About That.

Bill at Literate Lives features a poem from Eileen Spinelli’s collection, where i live.

Becky’s children are memorizing poems by Kipling and Lewis Carroll over at  Farm School.

Over at Mitali’s Fire Escape, you’ll find a special treat — an excerpt from her upcoming novel, Secret Keeper (January 2009), which includes some poetry by Bengal’s Nobel Laureate, Tagore.

A nice double header over at Laurel’s Kid Lit(erary) — an original poem, “Dear Bob Dylan,” and some Norman Dubie.

Don’t miss Dylan’s “Clean Cut Kid” over at The Reading Zone — it’s a poignant reminder of what Vietnam was all about.

Just in time for the upcoming movie release of Horton Hears a Who, here’s a funny review posted by Suzanne at Adventures in Daily Living.

Mary at Audiobooker features Poetry Speaks to Children — an anthology and CD set with poets reading their own works.

If you’re in the mood for Yeats, visit Crispus Attucks at Dominant Reality, where you’ll find “1916,” written about the Easter Uprising.