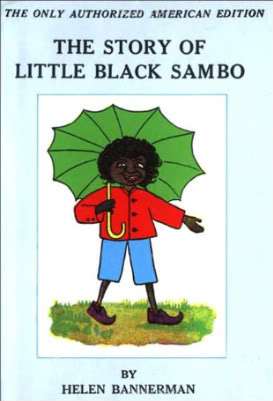 Today seemed like the perfect time to talk about this enduring classic — it’s Banned Books Week, and, equally important, this story ends with a huge helping of pancakes!

I’ve loved Little Black Sambo since childhood and was not fully aware of all the details regarding its controversial history until recently. It’s been continuously in print since 1899, ever since the copyright was sold outright to a London publisher for a mere five pounds. Subsequently, the author lost all control over the more than 50 pirated editions distributed in ensuing decades. Many of these contained offensive illustrations perpetuating racial stereotypes — pictures not created by Scotswoman Helen Bannerman herself. 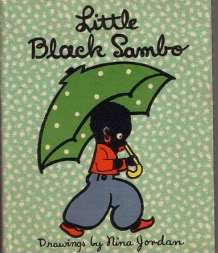 Of course, this doesn’t necessarily mean that Bannerman’s own illustrations were not disputed. Innocently enough, she wrote the story for her two daughters while living in India, and never really intended to publish it until a friend encouraged her to do so. Bannerman mixed fanciful elements — one of the first black heroes in children’s literature encountering and outsmarting ferocious tigers in India, with a meal at the end featuring European pancakes.

Initially, the book was praised for its innovation — small trim size, spare, rhythmic text, effective use of repetition, a satisfying, suspense-filled plot, and bright, colorful, naive illustrations. Most important, children everywhere loved it.

But with growing racial consciousness in America and Great Britain in the mid 20th century, public outcry grew, as Bannerman’s caricatures were cited as patronizing and demeaning towards Blacks, and her use of the name, “Sambo,” a blatant racial slur. Though there was never any court order actually banning the book, many libraries removed it from their shelves. Others defended the book as an important artifact from a bygone era, emphasizing that the author never intended to insult or offend anyone.

Such controversy is understandable in cultural and political contexts, a lesson for all to heed about how a simple children’s story, created from a specific historical mindset, can through time be accepted, reviled, adapted, distorted, or utilized as a political scapegoat. In America, harsh criticism reached its peak during the Civil Rights Movement of the 60’s. The book never totally disappeared, however; in some libraries it was stored behind the counter.

My feeling is that a weaker, less cogent tale would have vanished from collective memory by now. Despite objections to caricatures and nomenclature, the story itself never came under attack. It featured a clever, resourceful young hero displaying great courage and using his wits to best his enemies, with lots of excitement and bits of humor — the perfect formula to delight children across cultures.

Recent versions of Little Black Sambo have reinforced the positive elements of the basic story, making it possible for future generations to enjoy it in a more politically correct format. These new approaches speak volumes about how far we’ve come, what we now deem acceptable, and what today’s artists consider to be most relevant.

It’s interesting that two of the three most recent retellings have done away with the “Sambo” name entirely, even though Bannerman’s own connotation of it was entirely positive. As a society, we have “grown up” with this book, but since we still have much to learn about positive ways of promoting tolerance via literature, I predict we’ll continue to see more editions, further documenting changing mores.

Here are three of the most recent versions and an adaptation:

1. The Story of Little Babaji, pictures by Fred Marcellino (Michael di Capua, 1996). Marcellino stays true to Bannerman’s text, setting the story story in India, but he gives the characters “authentic Indian names.” Innocuous and pleasant enough, with Babaji almost appearing sanitized. The small, square trim size and illos have a distinctive charm of their own.

2. Sam and the Tigers, retold by Julius Lester, pictures by Jerry Pinkney (Dial, 1996). PW rightfully called this reinvention “hip and hilarious.” Set in the imaginary Southern town of Sam-sam-sa-mara, everyone is named Sam, and “the animals and the people lived and worked together like they didn’t know they weren’t supposed to.” Lester’s Sam has an attitude, insisting on picking his own school clothes, and the story has been revitalized with sass and spirit: “Ain’t I fine.” Pinkney’s detailed, full-bleed illos are rich and amazing, creating a setting where wonder can flourish among ordinary folk.

3. The Story of Little Black Sambo, illustrated by Christopher Bing (Handprint Books, 2003). A handsome and ambitious book, with Bing retaining Bannerman’s original text and depiction of an African boy facing his tigers in India. The book is meant to resemble an antique volume, with worn, yellowed, splotched pages and a tiger claw mark on the cover. The endpapers contain old maps, postcards, photos and newspaper clippings, which I suspect will appeal more to book collectors than picture book readers. Bing’s intent was to give full expression to both historic context and authenticity.

4.Pancakes for Supper, by Anne Isaacs, pictures by Mark Teague (Scholastic, 2006). Sambo has entered the 21st century with this adaptation featuring a heroine named Toby in a tall tale set in the wilds of New England. She doesn’t meet tigers, but animals native to the region, and there isn’t a pool of butter at the end, but a tree providing maple syrup. Teague’s oil paintings are richly hued, vibrant attention grabbers — especially the spread of a big bear wearing Toby’s mittens on its ears. Of course there’s a recipe on the back cover to top it all off: Toby’s Animal Pancakes.

Barbara Bader’s article in Hornbook, “Sambo, Babaji and Sam,” provides an excellent blow-by-blow of the book decade by decade.

Watch this rare cartoon from 1935, which was banned from public viewing in the United States because of racial stereotypes.

Listen to Christopher Bing discuss his version of the story on NPR.

“And then they all sat down to supper. And Black Mumbo ate twenty-seven pancakes, and Black Jumbo ate fifty-five, but Little Black Sambo ate a hundred and sixty-nine, because he was so hungry.”

10 thoughts on “The Story of Little Black Sambo: a book with a checkered past”