This is the second in a series of posts about Presidential Food.

When I was in school (Dark Ages), my impression of past Presidents was like this:

While I liked learning about legislation, wars, fireside chats, and alas, assassinations, something was always missing in the biographies I read: food — the one thing that could have humanized the Presidents for me in an instant. 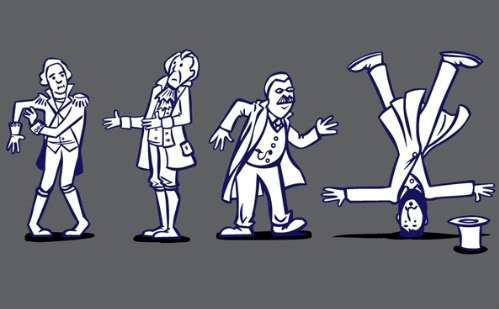 These days, there’s no escaping all things presidential. But rather than let all the spit, venom and sting spoil my appetite, I’ve been overindulging in tasty tidbits, decidedly delicious dirt, and titillating tales of past Presidents and First Ladies. I love reading about Ronald Reagan’s sweet tooth, that Eleanor Roosevelt once served King George VI and Queen Elizabeth hot dogs and baked beans for lunch, and that Abraham Lincoln had the smallest appetite of all our Presidents — often eating only fruit salad and cheese and crackers for dinner, much to his wife’s dismay.

Oh, and I’ve gained new respect and admiration for Thomas Jefferson. As if he wasn’t already brilliant and talented enough, he was a true gastronome, a connoisseur of all things palatable, a man who, whenever tasting something delicious in Paris, asked for the recipe so he could write it down! You gotta love a man like that (he deserves his own post).

One of the first books I picked up on the subject is the White House Cookbook, by Hugo Ziemann and F.L Gillette (Chronimed Publishing, 1996). It was originally published in the 1890’s (Ziemann was Grover Cleveland’s White House steward), and is a fascinating bit of Americana, a compendium of numerous heart attack-on-a-bun recipes along with tips on table etiquette, funny household hints, recipes for toiletries, and home health remedies. 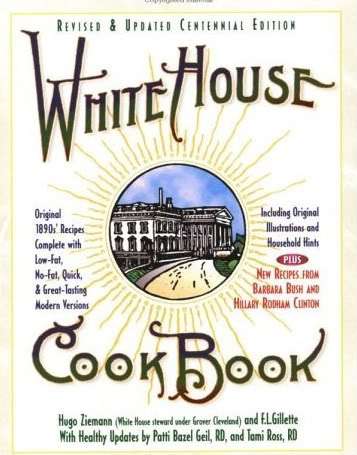 If you want to know how to wash your feathers, prevent your bedstead from creaking, or cure pimples, this is the book for you. Over 100 years ago, “obesity and gout were considered by many to be a mark of good living. Americans rarely bathed, rarely opened a window, and rarely took any regular exercise.”

While President Cleveland himself was reportedly not much of a gourmand (his fave dish was corned beef and cabbage), his wife, Frances, was known to be a fine hostess, even at the tender age of 21 (she was the youngest woman to become First Lady). The guests at their wedding reception were served terrapin, breast of spring chicken, cold meats, salads, fish, pate de foie gras, ice cream molds, bonbons and fruits. Though Cleveland preferred plain food over French cuisine, he wasn’t shy about eating lots of what he loved. He weighed 250 pounds and was called “Uncle Jumbo.”

During the Cleveland administration, Aunt Jemima’s Pancake Mix, shredded wheat, and Postum — favorite drink of uber cool LJ writer  — all came on the scene. Coca Cola was still new, and Milton Hershey was experimenting with a new chocolate-making machine.

The Revised and Updated Centennial Edition of The White House Cookbook thankfully contains modernized recipes by Patti Bazel Geil, R.D., and Tami Ross, R.D., which are decidedly more heart-friendly, right alongside the original 1890’s ones. This makes it possible and pleasurable to “participate in history” with a minimum of guilt, and won’t require you, for example, to add 20 eggs to cake batter and beat it vigorously for 3 hours.

Now, just in case you’re in dire need of a few fixes, consider these Recipes for Toiletries:

Bay rum two pints, alcohol one pint, castor oil one ounce, carb, ammonia half an ounce, tincture of cantharides one ounce. Mix them well. This compound will promote the growth of the hair and prevent it from falling out.

Dye for White or Light Eyebrows

Boil an ounce of walnut bark in a pint of water for an hour. Add a lump of alum the size of a filbert, and when cold, apply with a camel’s hair brush.

Powdered nitre moistened with water and applied to the face night and morning, is said to remove freckles without injury to the skin.

Also, a tablespoonful of freshly grated horseradish, stirred into a cupful of sour milk; let it stand for twelve hours, then strain and apply often. This bleaches the complexion also, and takes off tan.

And I simply must share my favorite food recipe from the book, because I feel it is my civic duty. Just in case, you know, you have a couple of squirrels hanging around and you’re positively perplexed about how to prepare them:

Wash and quarter three or four good-sized squirrels; put them on with a small tablespoon of salt, directly after breakfast, in a gallon of cold water. Cover the pot close, and set it on the back part of the stove to simmer gently, not boil. Add vegetables just the same as you do in case of other meat soups in the summer season, but especially good will you find corn, Irish potatoes, tomatoes and Lima beans. Strain the soup through a coarse colander when the meat has boiled to shreds, so as to get rid of the squirrels’ troublesome little bones. Then return to the pot, and after boiling a while longer, thicken with a piece of butter rubbed in flour. Celery and parslely leaves chopped up are also considered an improvement by many. Toast two slices of bread, cut them into dice one-half inch square, fry them in butter, put them into the bottom of your tureen, and then pour the soup boiling hot upon them. Very good.

Warning: Eating this soup may cause an uncontrollable craving for nuts.

Bon Appetit, and do join me for more presidential food right up until the election. I’m assuming, by then, you’ll have a full head of hair, very dark eyebrows, and a scarcity of freckles.

Barack Obama likes four to six eggs, potatoes, and wheat toast. Every now and then, fruit, bacon and oatmeal.

For the skinny on other political and media types, read “Breakfast of Champions” at Saveur.com.

21 thoughts on “noshing with the notables: The White House Cookbook”