So, are you ready to get delicious?

Okay, I know you’re already scrumptiously talented and have excellent taste when it comes to all things bookish, but I thought I’d tempt you today with some seriously divine, ambrosial offerings — literary cookbooks.

At this very moment, I’m strapped down to my desk chair, because just thinking about excerpts from beloved, classic books alongside recipes derived from or inspired by the stories, propels me into a state of acute culinary bliss. *Butt rises in chair* See, this topic is actually dangerous — but for you, I’ll take my chances.

I’ve been collecting literary cookbooks for quite some time. While not all the dishes I’ve tried have knocked my socks off, I’ve always been happy just reading the recipes, and appreciating the connections they have with the works. For me, this is a satisfying way of enhancing the enjoyment of a story, since it deepens my understanding of character, historical context, and setting. And if the recipes just happen to be good, it’s all gravy.

Though all of these cookbooks are based on children’s books, they are actually suitable for cooks and would-be cooks of all ages. They’re great for adults who like to revisit old favorites, and will provide hours of fun for grown-ups and kids to work together in the kitchen. And, unlike recipes from ordinary cookbooks, these are seasoned with just the right dash of literary flair.

THE WIND IN THE WILLOWS COUNTRY COOKBOOK by Arabella Boxer (Methuen, 1983). If you’re in a decidedly British mood, why not pack a hamper and join Toad, Mole, Ratty and Badger riverside? Here, you’ll find Food for: Staying at Home, Staying in Bed, The Store Cupboard, Excursions, and Celebrations. The 100+ recipes range from simple to more complicated, and provide an opportunity to sample British standards like Bubble and Squeak, Jam Rolypoly, and Cornish Pasties. In honor of the characters, there are things like Toad Hall Trifle, Ratty’s Potted Meat, and Moly’s Marmite Soldiers. All garnished with memorable excerpts and line drawings by Ernest Shepard.

THE ANNE OF GREEN GABLES COOKBOOK by Kate Macdonald, pictures by Barbara DiLella (Oxford University Press, 1985). A slim volume featuring 25 recipes inspired by the Anne books and compiled by L.M. Montgomery’s granddaughter. Ms. Macdonald reminds us that “Anne eventually became a good cook by following Marilla’s advice.” Probably the most memorable food scene of all is when Anne discovers a mouse drowned in the pudding sauce, and this is acknowledged with a recipe for Marilla’s Plum Pudding and Warm Caramel Pudding Sauce (I would have tested it for you, but I’m afraid of mice)! Also of note: Diana Barry’s Favourite Raspberry Cordial, Poetical Egg Salad Sandwiches, and Anne’s Liniment Cake. A table of cooking tips and terms rounds out this lovely collection. Perfect for kindred spirits!

THE LITTLE HOUSE COOKBOOK by Barbara M. Walker, pictures by Garth Williams (Harper and Row, 1979). No doubt you’ve seen or possibly already own this classic of the genre. Food plays a big role in the Little House books; much of the action is centered on hunting for it, or growing, harvesting, preserving, serving and eating it. When Laura learned how to cook from Ma, she also learned social skills, about human communion. 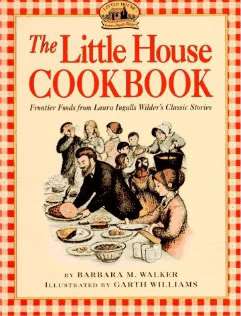 So much more than just a cookbook, this volume contains fascinating information about how food was obtained on the frontier, and how it was valued in American pioneer life during the late 19th century. All are authentic recipes from the period adapted for a modern kitchen, and as Ms. Walker states in her introduction, some are more historic than taste sensations. Who can resist Pancake Men, Doughnuts, or Apple Turnovers? Or maybe you’d like to learn how to can, butcher a pig, or churn butter. This is the book that will instill an appreciation for the food on the table, as it traces its connection to the field, the orchard, and the barnyard.

*My post about Almanzo Wilder’s eating habits in Farmer Boy.

THE NARNIA COOKBOOK, commentary by Douglas Gresham, pictures by Pauline Baynes (HarperCollins, 1998). A thoroughly delightful collection of recipes for Breakfast, Lunch, Afternoon Tea, Dinner, Dessert and Drinks, all inspired by foods appearing in C.S. Lewis’ Chronicles. Jack, as he was called, was quite a foodie himself, and included in the stories those dishes he himself loved. Did your mouth water when Edmund was tempted with Turkish Delight? I know I was jealous when Lucy had tea with Mr. Tumnus (as fauns are known to be very good cooks).

Douglas Gresham, whose mother, Joy, married Jack later in life, serves up interesting comments about each recipe, either about its culinary origins or place in the stories. Of course there are direct quotes from the books to transport us right back into the wardrobe. Recipes range from simple things like Buttered Eggs to the more challenging Roast Pheasant. Things I would not try: Stewed Eels, Pigeon Pie, Chicken Livers Calormene. Things I’m anxious to try: Lucy’s Roast Apples, Sugar Topped Cake, Meat Pasties. Pen-and-ink and watercolor illos by Narnia’s original illustrator, Pauline Baynes, are a real treat.

THE BOXCAR CHILDREN COOKBOOK by Diane Blain (Scholastic, 1992). Though not glossy or elaborately illustrated, this collection of standard recipes is one that will be returned to again and again. That’s because most of the dishes included are what kids actually like already or would be willing to try. Examples: Pomfret Landing Milkshake, Explorer’s Bacon, Boxcar Brown Bread, Benny’s #1 Favorite Sandwich, Mike’s Favorite Chicken Legs. Each recipe begins with the excerpt from the story that inspired it, followed by very clear step-by-step instructions. There’s even a section on Campfire Cooking, with the gold standard of all camp favorites, S’Mores.

Hope these inspire you to create magic in the kitchen with your family. Look for them at your local library, add them to your personal wishlist, or purchase one as a holiday gift for someone special (you may have to search used bookstores for older titles).

15 thoughts on “my favorite literary cookbooks for kids (and short grown-ups), part one”