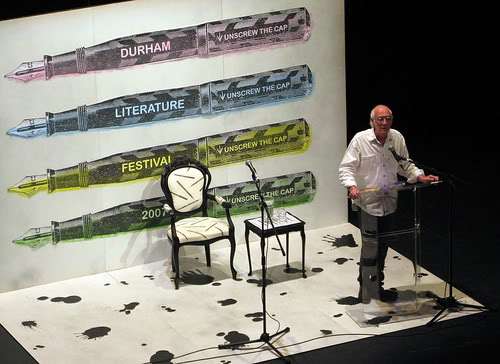 photo of Roger McGough by deouro

AN APOLOGY
by Roger McGough

Owing to an increase
in the cost of printing
this poem will be less
than the normal length.

In the face of continued
economic crises, strikes,
unemployment and V.A.T.
it offers no solutions.

Moreover, because of
a recent work-to-rule
imposed by the poet
it doesn’t even rhyme.

I don’t remember exactly when I read my first Roger McGough poem, but I know I liked him right away, and, ever since, I’ve always been eager to read more of his work.

He doesn’t seem that well known in the U.S., but he’s very popular in Britain, both with adults and children. He rose to prominence as a Liverpool Poet in the 60’s, part of a group of pop performance poets who used direct language to riff on a wide variety of contemporary subjects. Poems were often read to music in jazz clubs and cafes — and yes, McGough and his co-horts, Adrian Henri and Brian Patten, were influenced by the 50’s Beat Poets and French Symbolists, Rimbaud and Baudelaire. 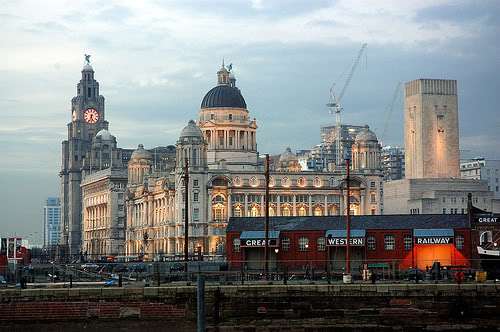 I once had a penpal from Liverpool. Because of the Beatles, I was SO jealous and wanted to trade places with her. After all, Allen Ginsberg once called Liverpool, “the centre of the consciousness of the human universe.” 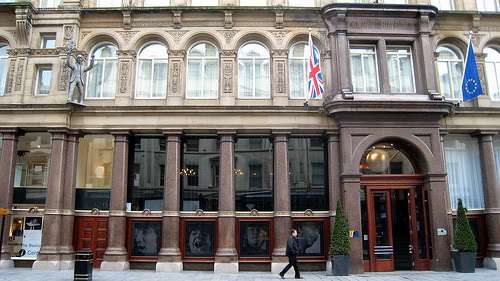 Poets like McGough certainly wrote poetry that was fully accessible to a young, hip audience. Its suitability for live performance was directly in keeping with the pop movement, and though the Liverpool Poets have had their share of critics, their influence can still be felt today. There are now “more women poets, more confident queers, more people of diverse backgrounds and different levels of education who are taking part and giving their voices to the ever-changing cultures that make up Liverpool.”

I like the idea of poetry for, by, and about “real people,” no matter where they live. And I think it would be way cool to one day dine with the narrator of this poem, since a strong undercurrent of sarcasm, keen wit, and irony are all part of the meal: 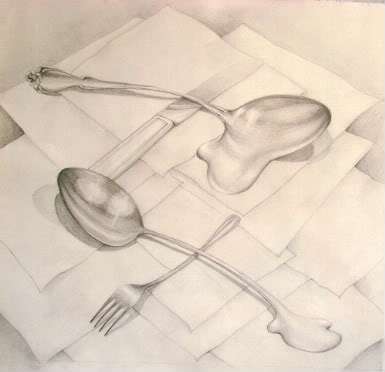 During dinner the table caught fire.
No one alluded to the fact
and we ate on, regardless of
the flames singeing our conversation.

Unaware of the smoke
and the butlers swooning,
topics ranged from Auden
to Zefferelli. I was losing
concentration however, and being
short on etiquette, became tense
and began to fidget with the melting cutlery.

I was fashioning a spoon
into a question mark
when the Chablis began to steam
and bubble. I stood up,
mumbled something about having left the gas running
and fled blushing
across the plush terrain of the carpet.

The tut-tut-tutting could be heard above
the cra-cra-cracking of the bone china.

Outside, I caught a cab
to the nearest bus stop.
While, back at the table,
they were toying with blazing fruit
and discussing the Role of the Poet as Entertainer,
when the roof fell in.

~ both poems from Holiday on Death Row by Roger McGough (Jonathan Cape, 1979).

Once belonged to a comedy group called “The Scaffold,” with Paul McCartney’s brother, Mike, and John Gorman. (See their #1 hit song here.)

Wrote much of the humorous dialogue for the Beatles’ animated film, “Yellow Submarine,” but never received on screen credit for it. 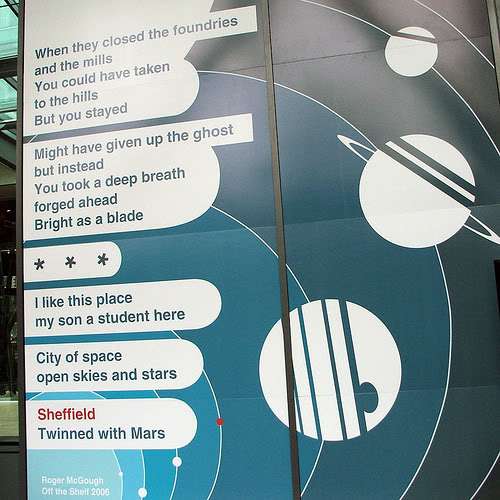 McGough’s poetry can sometimes be seen adorning buildings and walkways.
photo by Only Alice

*Don’t miss this wonderful animated video of the McGough poem, “My First Day at School.”

The blazing roundup of poems today can be found at The Holly and the Ivy. 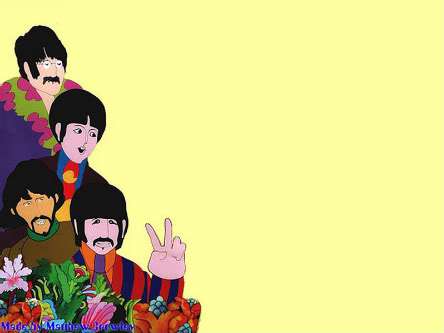 17 thoughts on “friday feast: a poet from the beatles era”