Go ahead. Reach out and grab one.

Then munch to your heart’s content, because February is National Snack Food Month!

Potato chips are America’s favorite snack food — to the tune of over $6 billion worth consumed every year. But for all the chips we’ve inhaled in our lifetimes, how many of us know who invented them?

Enter, the perfect picture book biography, George Crum and the Saratoga Chip, by Gaylia Taylor, illustrated by Frank Morrison (Lee and Low, 2006). Like the perfect chip with just the right snap and crunch, this story, about a biracial chef who inadvertently invents these crispy rascals back in 1853, is both satisfying and inspiring.

The tale begins with George’s boyhood in Saratoga Springs, New York, where he was often ridiculed in school because of his ethnicity (part Native American, part African American). He was much more in his element outdoors — hunting, fishing, and exploring the nearby Adirondack Mountains.

Once he was out of school, he began delivering fresh fish and game to restaurants in the area. While out hunting one day, George met a Frenchman who taught him how to cook on an open flame. Voila! George had found his passion: he began to experiment with different spices and seasonings, and was able to land a job as a chef in one of the best restaurants in Saratoga Springs, despite the fact that in those days, most African Americans were mainly hired as waiters.

George’s wild game and fish dishes soon made him famous among rich and fancy customers, who especially loved his canvasback duck. But sometimes a fussy or demanding customer tried George’s patience. 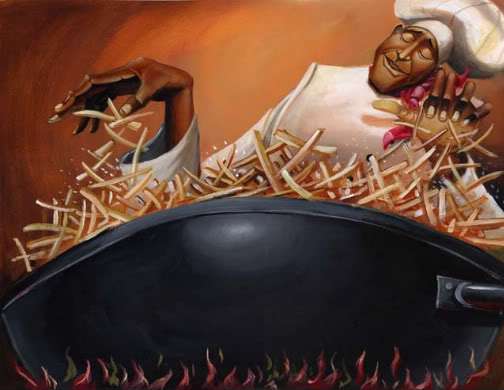 One day a woman ordered french fries — a fashionable dish at the time, and George, a spirited perfectionist, welcomed the challenge. He sent out a perfectly prepared, piping hot batch, but much to his surprise and chagrin, the woman declared they were cut too thick before even tasting them. Well, George had finally had enough — if she wanted thin, she was going to get thin! He cut some potatoes so, so thin you could see through them, then cooked them in very hot oil. To everyone’s astonishment, the woman loved the new potato creation from her very first bite, and from then on, everyone who came to Moon’s Lake House requested what would soon be called, Saratoga Chips.

But that wasn’t the end to George’s story. He eventually bought some land, built his own restaurant, and served cuisine prepared from fresh ingredients he grew himself. Most important, every customer was treated equally at his restaurant, regardless of skin color, age, gender, or economic status.

And the pictures in this book? Sweet, smooth and sassy eye candy.

Frank Morrison’s elongated, crazy angled characters (rendered in vibrant acrylics), strut, glide and careen through the pages with spot on facial expressions, from the snobby upturned noses of the posh clientele, to engaging depictions of George’s embarrassment, frustration, feistiness, and sheer joy when he’s in the kitchen inventing a new recipe. Foodies will love the illos of George learning to cook on a campfire, the bustling dining room full of hoity toity customers, and George slaving at the stove trying to satisfy a picky customer.

George Crum and the Saratoga Chip has received rave reviews, and earned a Bank Street College of Education Children’s Book of the Year Award. An Author’s Note separates fact from fiction in this zesty feast of a book that will appeal to a wide readership interested in food, multicultural studies, and interesting inventions. After all, who, in his right mind, could ever resist the perfect chip?

More illos can be viewed at the publisher’s website. Also check out this tasty interview with Gaylia Taylor.

More to Nibble On:

The ultimate chip that made Maui famous — still handmade in limited quantities (thick and dark, with an excruciatingly delicious explosion of flavor in every bite)!
~ photo by Stu Spivack.

** So, what’s your favorite type of potato chip? Rippled or thick cut? Salted or barbecue? Plain or with dip? And do you like the bubble ones (I don’t)?!

Tricia of The Miss Rumphius Effect is hosting the Nonfiction Monday Roundup today.

24 thoughts on “betcha can’t eat just one: George Crum and the Saratoga Chip”