Saturday morning, Len and I headed out to Georgetown Cupcake for a little taste test. You may remember my mentioning this shop last week. It’s owned by two sisters, Sophie and Katherine, who’ve now become quite famous all over the country for their award-winning chocolate ganache cupcakes. Research is hard work, but somebody’s gotta do it.

It was a gorgeous day, and everyone was out and about, bicycling, roller blading, walking their dogs, and window shopping. We had no problem finding the shop on the corner of M and West Potomac Streets NW. Since we got there about 20 minutes after it opened, the wait line wasn’t long at all.

It’s such a teeny tiny place; it’s hard to imagine they sell between three to five thousand cupcakes a day, at $2.75 a pop. I was surprised at how many people kept streaming out of the shop with goodies (and smiling, of course). When I finally made it to the top step, I saw this:

Yum! Flood of excitement and happiness. Cupcakes = childhood, celebrations, good times. A friendly college student took my order, while two others carefully packed my cupcakes in lovely pink boxes — one for us, and one for Len’s cousin, Liz, who lives in Georgetown. It was her birthday, so we thought we’d surprise her with some cupcakes. What? No, we weren’t using Liz as an excuse for buying cupcakes. You think? No, couldn’t be. What guilt?

Turns out, though Liz has lived in Georgetown forever, she didn’t know about Georgetown Cupcake. But she squealed with delight at her box: red velvet, chocolate ganache, lemon berry, cherry blossom, and vanilla.

Len got quite possessive with the other box — almost the same selection as Liz, but with mocha and coconut. (Len is fanatical about all things coconut.) 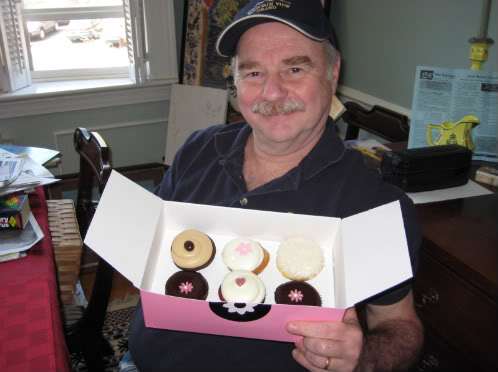 So Liz put on the tea kettle, while we sat at her dining table, with fresh, spring air wafting in through the open windows. We chatted about “John Adams,” little birthdays, and preserving her mother’s handwritten recipes. Oh, and we tested our little cupcakes!

Overall, the cupcakes were smaller than I expected, and had too much frosting.

But having said that,

Len’s coconut cupcake was supremely wonderful — the cake was very moist and the frosting was pudding-ish with coconut flakes that weren’t overly sweet.

Cherry blossom was my favorite cake — a slightly chewy texture because of the added cherry pieces, and delightful layers of flavor that really made me sit up and take notice.

Lemon berry was “interesting,” as Liz and I agreed. It was a surprise to taste tangy lemon in a fuschia-colored frosting.

And the much-touted chocolate ganache? The cake by itself was nothing exceptional. The ganache frosting was superb, and is really what “makes” this cupcake. But — it reminded me of my own chocolate midnight cake, which has a vanilla pudding filling, and a cooked chocolate frosting. 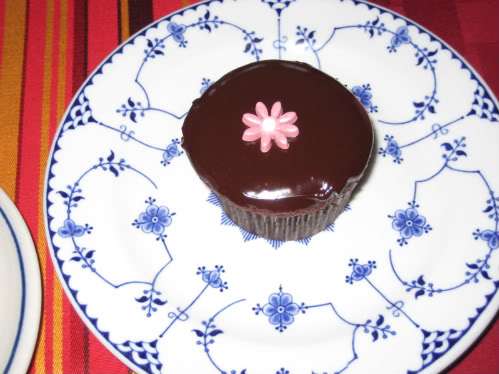 My conclusion: it’s loads of fun to taste gourmet cupcakes, but there’s still nothing like a fresh, homemade cake, lovingly baked from scratch, especially from a recipe that’s been handed down via family or friends. I prefer my aunt’s red velvet cake to GC’s red velvet cupcakes, but I am curious to see how those chocolate ganache cupcakes would turn out if I made them myself (recipe is here).

Hmmm — on second thought, I can’t really stop here. Far more research seems warranted. There’s Swirls in Beverly Hills, and Atlanta Cupcake and Kara’s in San Francisco . . . because you just can’t top the look on someone’s face when you show up at their door, and announce, “We’ve got cupcakes!”

To see a video of Georgetown Cupcake, click here.

And Sophie and Katherine are now selling a sterling silver bracelet with cupcake charms of some of their popular flavors. Yes, I want!

31 thoughts on “a little cupcake adventure at Georgetown cupcake”