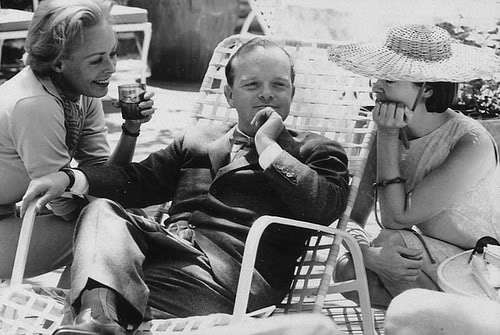 Ah, yes. The life of a writer — full of glamour, adoring fans, relaxing sojourns on the French Riviera.

how certain authors have become celebrities,

how much burden is placed upon the writer to promote, publicize, and sell himself to the masses,

how some avid readers have turned into groupies,

and that I need to develop substantial cleavage, so I can have these two gentlemen sign me:

Don’t you love how Coop furrows his brows? (photo by psychKate)

There’s just something about a British accent (especially Neil Gaiman’s).
(photo by spinnerin)

Puzzled? Read this poem by James Tate. It made me laugh, think, and ask myself, yet again, the all important question: Why do I really write?

THE BOOKSIGNING
by James Tate

An ad in the newspaper said that a local author
would be signing his new book at the bookstore today.
I didn’t even know we had any local authors. I was
going to be downtown anyway, so I decided to drop in
and see what he looked like. He was short and fat
and ugly, but all kinds of beautiful women were flirting
with him and laughing at every little joke he made.
Even though I didn’t know anything about his book, I
wished I had written it. A man came up to me and said,
“I hated it when the little girl died. I just couldn’t
stop crying.” “Thank God for the duck,” I said. He
took a step back from me. “I don’t remember the duck,”
he said. “Well, then, I’m afraid you missed the whole
point of the book. The duck is absolutely central,
it’s the veritable linchpin of the whole denouement,”
I said. (I had learned that word in high school, and
now it served me well.) “But what about the little
girl?” the man asked, with a painful look of bewilder-
ment on his face. “She should have been shot a hundred
pages earlier,” I said. “I don’t think I like you,”
the man said, and walked away clutching his book.
I looked over at the author. He was signing a young
woman’s cleavage, and the other women were laughing
and pulling open their blouses to be signed. I had
never even thought of writing a novel. Now, my mind
was thrashing about. The man I had offended earlier
walked up to me and offered me a glass of wine. “If
I may ask you, sir, why were you so rude to me?” he
said. I looked up from the abyss and said, “Because
I am nothing. Because I am a speck of dust floating
in infinite darkness. Because you have feelings and
you care. Do you understand me now?” “Perfectly,”
he said. “Cheers!”

~ from 180 More: Extraordinary Poems for Every Day, edited by Billy Collins (Random House, 2005).

Today’s Poetry Friday Roundup is being hosted by the lovely and talented Sara Lewis Holmes at Read*Write*Believe. I’m sure she will welcome you, with or without cleavage.

**Don’t forget that midnight tonight (EST), is the deadline for entering my drawing to win one of three copies of Anna Alter’s new picture book, Abigail Spells! Click here to read Anna’s interview.