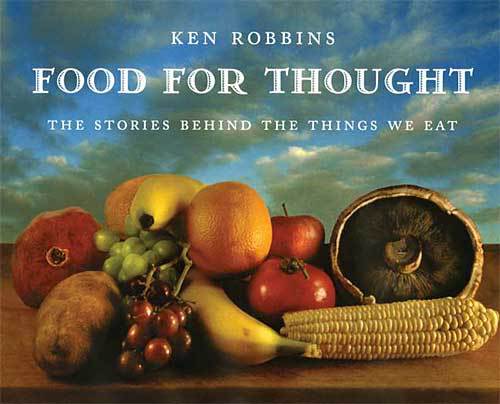 What do you think is the most important food in the world?

Besides chocolate, that is ☺.

In his sumptuous new book, Food for Thought: The Stories Behind the Things We Eat, Ken Robbins serves up a thoroughly mouthwatering, fascinating feast of culinary history, myth, folklore, trivia, and nutritional information about nine foods widely available in supermarkets across the country: apples, oranges, potatoes, tomatoes, grapes, mushrooms, corn, bananas, and pomegranates.

Though some may find the selection eclectic, I like that Robbins includes foods most kids in America probably eat on a regular basis, maybe even take for granted — and then piques their curiosity with provocative infobits and absolutely stunning photographs. Then, while he’s got their attention, he also rhapsodizes about mushrooms and pomegranates (not exactly lunchbox fare), tempting them just enough to whet their appetites (pizza lovers may not even need a mushroom nudge).

As Robbins states in his brief introduction, “Every kind of food has its story.” This includes where these foods originated, how they are grown, processed, and consumed, how they’ve inspired writers and artists, what part they’ve played in America’s history, and even their political and economic implications in a world whose population will likely double by the year 2050.

I like knowing that an apple helped cause the fall of Troy, that Brazil produces the most oranges (but most of its OJ is not drunk at breakfast), and that bananas are so full of essential nutrients that it would be possible to “eat nothing else and still survive in good health.” Good stuff to know if you’re ever banished to a desert island and allowed to take only one kind of food! And now, I feel even more indebted to the Native Americans, who kept the Colonists from starving with their gifts of corn.

One might ask, why do we need to read this book, since the information is widely available on the internet? First, the gorgeous photographs are worth the price of admission alone. Life-size, and larger-than-life-size close-ups of the fruits and vegetables, set against various skyscapes, some dark and cloudy, some sunny, provide a unique opportunity for aesthetic appreciation. It’s no mistake that some of the world’s greatest paintings are still-life studies; through Robbins’ discerning lens, we are invited to reconsider and pore over the beautiful texture of orange peel, the juicy sheen of citrus chambers, or the curious, almost comic shapes of heirloom tomatoes. Food can nourish on so many levels. 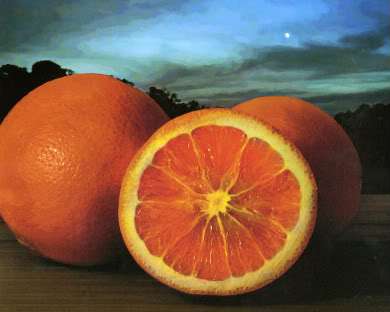 Also, each fruit or vegetable is discussed via several pages of text, with additional photographs showing their sources — a vineyard, a potato field, an apple tree. Because only 2% of today’s Americans live on a farm, fewer of us know what these foods actually look like in their natural state. Robbins never forgets who his audience is, either — kudos to him for two photos of french fries (both with ketchup, of course), along with pizza, apple bobbing, a mushroom fairy ring, as well as sit-up-and-take-notice mention of popcorn, cornflakes, banana splits, and apple pie.

Food for Thought, suitable for ages 6 and up, is perfect for National Fruit and Vegetable Month. The bountiful mixed platter of information contains just enough choice facts to intrigue young palates, enabling them to look at these common foods in a new way.

And the most important food? Corn. It feeds billions of people worldwide and without it, many would starve to death. Did you already know that?

Today’s Nonfiction Monday Roundup is at Tales from the Rushmore Kid.

25 thoughts on “tidbits to please the palate: Food for Thought by Ken Robbins”