“Then she slipped through it, and shut it behind her, and stood with her back against it, looking about her and breathing quite fast with excitement, and wonder, and delight. She was standing inside the secret garden.”  ~ Frances Hodgson Burnett


Whenever I am asked to name my all-time favorite children’s book, I always say, The Secret Garden.

It’s not like I’ve read it more than three or four times in my entire life, or that I can quote key passages from it at the drop of a hat. And as soon as I mention it, a bevy of other beloved favorites come to mind — Little Women, Little House books, Ramona Quimby, Anne of Green Gables, A Little Princess. I love them all — but somehow, The Secret Garden has the tightest grip on my child’s heart.

When I first read it, at the age of nine or ten, I knew nothing of the Yorkshire moors, gorse, heather, or the myriad flowers mentioned in the book except for roses. Instead of crocuses, snowdrops, lilacs, peonies and forget-me-nots, I had grown up with anthuriums, plumeria, bird-of-paradise. I had never seen a robin, fox, or crow. But I knew loneliness and had a big case of “it’s not fair,” and often wished I had the power to boss grown-ups around and make them listen to me. Oh, to have an Ayah or servants at my beck and call!

Mostly, though, I was captivated by the possibility of having a secret sanctuary which totally excluded all the disappointments, hurts, and concerns of the outside adult world. I loved knowing that children my age were capable of transforming a place of willfull neglect into a thriving Eden, and that even if you were once a brat, finding the right friend and learning how to use a trowel could cure you of it. Hope for the downtrodden! Open the book, pass through the gate, cultivate your imagination as you try to survive childhood. 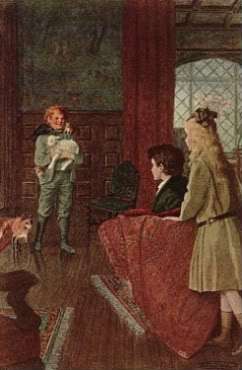 I suppose The Secret Garden hit me just when I needed it most. I did not grow up orphaned, rich, sickly or neglected. But like Mary Lennox, who asked for a “bit of earth,” I longed to claim something for my very own, and reading this story allowed me to do that. I claimed whatever emotions rang true, whatever truths made sense, whatever details and descriptions a nine-year-old was capable of holding on to. I had never eaten oatcakes or currant buns, but I knew the comfort a fresh glass of milk and a homebaked treat could provide. I could pretend a wild robin trusted and liked me unconditionally, and that I could depend on Martha or Susan Sowerby when my own mother was not around.

Then there’s the ingenuous belief that a small nobody girl like me, all on her own, could turn the corner and discover a wondrous, astonishing, albeit forbidden place! Why not? It was after reading this book, I think, that this startling thought took hold: you are capable of creating your own reality (in fact you must) — plant the seeds early, feed, nourish, protect and tend to the ideas that matter most. There is a secret garden in every person’s soul.

Recently, I read the book again, and it was, in many ways, like reading it for the first time. Because now I have the advantage of knowing what Yorkshire really looks like. I’ve wandered a little on those moors with the wind “wuthering” around me, heard the famous Yorkshire accent or Tyke, tasted some of that hearty cuisine. I’ve even been south to Kent, site of Great Maytham Hall, where Burnett lived for a time with her own rose garden and friendly robin, which is to say, now the story is sweeter, richer, deeper, more vivid and far-reaching. I wonder, sometimes, if my reading it as a child lay the groundwork for my decision later on to leave the insulated haven of O’ahu for a larger, distant garden two oceans and a continent away.

One thing I do know about England — “this sceptred isle, this other Eden” — is that gardens are taken very seriously, from the immaculate grand scale formal gardens of manor houses and parks, to the private gardens proudly and lovingly tended by the average citizen. Even small, non-descript rowhouses will have a patch of green out back, a natural calling card. If you’re British, you like your lager at room temperature and your gardens tidy, and Frances Hodgson Burnett exploited the garden metaphor to its fullest. It was a place of destruction and tragedy, where Colin’s mother had her fatal accident, but more importantly, a place of restoration, redemption, and healing — for Mary, Colin, and Mr. Craven.

One of the things I noted this time around was finding the Yorkshire dialect distracting at times; I don’t remember if it hindered my reading of the story as a child, but I found myself stumbling over some of it. I also did not like Colin’s pontificating and sermonizing near the end of the book. I found his scientific lecture about Magic over the top, an authorial intrusion designed to hammer home Christian Science/New Thought tenets.

The story itself beautifully illustrates the curative powers of nature, the importance of love, companionship, and friendship, and the power of positive outlook on health and well being without these added sermons. Dickon singing the Doxology also made me cringe. Just a little too preachy for me, though I doubt I found any of this objectionable as a child reader. Then, I read for story and happy endings and the high enchantment factor. The world of that garden was foreign, idyllic, pure fantasy. Who could have dreamed I would one day travel to that eternally green land a spinster schoolteacher, and emerge a blushing bride? ☺ There’s magic there, indeed.

The references to India, i.e., partly blaming a location for Mary’s ill health and sour temperament also gave me pause: “Her hair was yellow, and her face was yellow because she had been born in India and had always been ill in one way or another.” India is presented in an unfavorable light throughout the book — a place of ugliness and disease with nothing to recommend it, whereas England is an ideal place where, with fresh air, exercise, and companionship, people can thrive (even Mr. Craven’s travel to foreign lands is a sign of sickness). My mind swirls with the evils of British colonialism; I’m once again reminded of Burnett’s Christian Science agenda, how times have changed with our current aversion to overt moralizing, and how “showing, not telling” is today’s barometer for good fiction. Still, regardless of age, we all read for moments like these:

One of the strange things about living in the world is that it is only now and then one is quite sure one is going to live forever and ever and ever. One knows it sometimes when one gets up at the tender solemn dawn-time and goes out and stands alone and throws one’s head far back and looks up and up and watches the pale sky slowly changing and flushing and marvelous unknown things happening until the East almost makes one cry out and one’s heart stands still at the strange unchanging majesty of the rising of the sun — which has been happening every morning for thousands and thousands and thousands of years. One knows it then for a moment or so. And one knows it sometimes when one stands by oneself in a wood at sunset and the mysterious deep gold stillness slanting through and under the branches seems to be saying slowly again and again something one cannot quite hear, however much one tries. Then sometimes the immense quiet of the dark blue at night with millions of stars waiting and watching makes one sure; and sometimes a sound of far-off music makes it true; and sometimes a look in someone’s eyes.

The Secret Garden was first serialized in The American Magazine (1910), before book publication in 1911. Surprisingly, it was not Burnett’s most lauded work during her lifetime. She led an interesting transatlantic sort of life with her fair share of sorrow and adversity: losing her father at age 4, suffering from depression, surviving two failed marriages and the death of her older son, enduring harsh public scrutiny and condemnation of her lifestyle.

The book’s been in the public domain in the U.S. since 1987, and is available in a skerjillion different editions, some with illos by people like Tasha Tudor and Charles Robinson. A recent edition published by Candlewick in 2007 contains a treasure trove of Inga Moore’s gorgeous ink and watercolor illustrations. I love how the highly detailed pictures progress from soft and subtle to brighter and more vibrant as the children and garden flourish. In many ways, it’s the secret garden as I have long imagined it. If you love this story, you must see it.

Do kids these days still read The Secret Garden? Lois Lowry doubts they do, but would love it if they did, because:

I would like next century’s children to know the languor of loneliness, the anguish of neglect, and the sweet frisson that secrecy gives. And if only, through the leisurely pace of pages, they could learn of the patience, tenderness, and nurture that once brought flowers — and young humans — into bloom. (Horn Book Magazine, 2000)

Just for fun, take this Secret Garden Quiz to see how much you remember.

And, don’t miss Lois Lowry’s Introduction in the Bantam Classic edition — insightful and enlightening (click on the See Inside feature to read it in its entirety).

31 thoughts on “the secret garden (part one): another peek inside”