“Truth is like the sun. You can shut it out for a time, but it ain’t goin’ away.” ~ Elvis Presley

A well I bless my soul,
What’s wrong with me?
I’m itchin’ like a man in a fuzzy tree
My friends say I’m actin’ wild as a bug
I’m in love —
I’m all shook up!

Sweet Jesus, can you feel it?

Elvis is in the building!

For someone who turns 75 today, he looks smokin’ hot.

I’m grateful I grew up with his music, very happy my first exposure to him was during the early part of his career — before Hollywood turned him into a mass market brand, before Las Vegas, before all the tacky velvet paintings and cheesy Elvis imitators, before he became a caricature of himself. I like Elvis best raw, unschooled, doing what came natural. What a thrill to witness the makings of a King.

This is not to say I stopped loving him when he started making all those predictably sappy movies. On the contrary. My cousins and I spent countless hours in the Wahiawa Theatre, watching “Kissin’ Cousins,” “Viva Las Vegas,” and “Blue Hawai’i” over and over. Then we went home and acted out the stories.

See, we claimed Elvis as uniquely ours, because he loved Hawai’i so much. Besides “Blue Hawai’i,” he also filmed “Paradise, Hawaiian Style,” and “Girls, Girls, Girls” there. And of course there was the famous 1973 Aloha from Hawai’i TV Special, the first global live concert satellite broadcast, reaching 1.5 billion viewers, and raising $85,000 for the Kui Lee Cancer Fund.

Because of “Blue Hawai’i,” I experienced my first official teeny bopper-heart-stopping moment. Safe to say nothing much happened out our way in central O’ahu, where I grew up. But one day, I was riding in a car along Kamehameha Highway, pineapple fields on either side, when we spotted a baby blue convertible in the distance. Remember the scene (“Moonlight Swim”) where Elvis’s character, Chad, takes Miss Prentice and her four teenage students on a guided tour around the island? Yes! They whizzed right by us! Red dirt never looked so good, and it easily became my favorite part of the film.

Besides listening to his music, how else could we celebrate The King’s birthday? I propose eating what Elvis had for his last meal: spaghetti and meatballs, four scoops of ice cream, and six chocolate chip cookies. 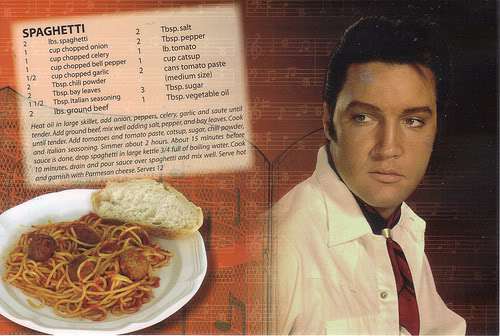 Or maybe a charred hamburger, which was supposedly his all-time favorite, even eclipsing the iconic fried peanut butter and banana sandwich. While you’re deciding, wrap your lips around this banana cupcake with peanut butter buttercream frosting and honey bacon sprinkles:

Tricia of The Miss Rumphius Effect is hosting today’s Poetry Friday Roundup. “Baby, let me be, your lovin’ teddy bear . . . ”

I leave you with my favorite ballad. Thank you, thankyouverymuch.