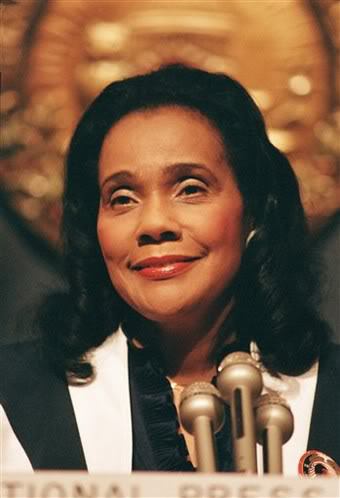 In commemoration of the 4th anniversary of Coretta Scott King’s death on January 30, 2006, I am honored today to share a new, as yet unpublished poem by the astoundingly prolific and versatile
J. Patrick Lewis.

Pat tells me “The Activist” is from a forthcoming collection, tentatively titled, Thunder Before Lightning: Poems for the Civil Righteous, to be published by Chronicle Books in either 2012 or 2013. I asked him what inspired the project, and he said:

“A few years ago I published Freedom Like Sunlight: Praisesongs for Black Americans (Creative Editions, 2000). But I felt I had more to say, so I expanded the subjects to include well- and lesser-known people of all races. I don’t see the new book as a sequel, exactly, but I suppose one could make that argument.”

Thunder Before Lightning looks to be an enlightening, inspiring collection, and I’m thrilled Pat has allowed us this sneak peek. I’m sure you’ll find the poem as powerful and moving as I did; it beautifully captures the quiet strength, courage and determination of this beloved champion of social justice.

THE ACTIVIST
by J. Patrick Lewis

March from Selma to Montgomery, 1965 (photo by Hultin/Getty Images).

We wept when the man was taken,
But we knew it was meant to be.
Daylilies drooped in the garden;
Night birds fell dumb in the tree.
We expected the worst of the future,
For the future is seldom bright,
And they carried away on the killing day
The last of the first daylight.

She moved to the front unbeaten,
Stepped slowly up to the board.
When she lost the man to the Ku Klux Klan
Her silent shadow roared.
Out in the enemy country,
Death marshaled itself for a fight,
But she led a choir in the line of fire
The first of the next daylight.

Stand tall, stand all my children,
Put away the sinister guns.
Embrace the boys that Hate employs,
Like mothers do their sons.
Daylilies might bloom in the garden,
Night birds might sing in the night,
When dignity will set us free
The rest of the best daylight.

I leave you with some of Mrs. King’s own words, from her address to the Academy of Achievement at the National Cathedral in Washington, D.C., June 1999:

On March 31st, 1968, just four days before Martin was assassinated, he delivered his last sermon, entitled, “Remaining Awake Through a Great Revolution,” right here in this cathedral. In the sermon, Martin inspired us with his unshakable faith in the triumph of good over evil, and he said, “With this faith, we will be able to hew out of the mountain of despair the stone of hope. With this faith, we will be able to transform the jangling discord of our nation into a beautiful symphony of brotherhood.” And so today, I want to challenge you to make a courageous commitment, not only to achieve personal success, but to use your success to help create this beautiful symphony of brotherhood and sisterhood, and if you embrace this challenge with prayer and faith and determination, you will surely succeed, and the 21st Century wil become a glorious new age of peace and progress for all humankind. May God bless you and give you the strength to fulfill your dreams.

Thank you for sharing “The Activist” with us, Pat!

Today’s Poetry Friday Roundup is being hosted by Anastasia Suen at Picture Book of the Day. I’m sure you’ll find something to delight, inform, and inspire. Have a good weekend!

For more about J. Patrick Lewis, visit his official website. Can you believe he published 5 (!) books last year? I could be wrong: there’s probably more ☺!

Cool interviews with Tricia at The Miss Rumphius Effect, and Elaine at Wild Rose Reader.