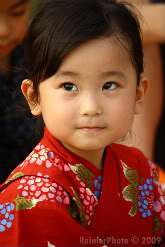 photos by *Randee and sir_mencius.

Ready to spend a little time in the Land of the Rising Sun? Perhaps you wouldn’t be adverse to a savory, artfully arranged dinner box containing salmon teriyaki, shrimp and vegetable tempura, tsukemono, negamaki, seaweed salad, and several slices of maki-zushi. Oh, and miso soup, of course! What’s that? You’re pressed for time? Well, what about a nice bowl of ramen or a cute little bento box?

BUTTERFLIES FOR KIRI by Cathryn Falwell (Lee & Low, 2003). Kiri, who loves to draw, paint and make things, receives a colorful origami set with an instruction book for her birthday. She eagerly tries to make a purple butterfly, just like the one her aunt placed on her birthday gift, but after a couple of folds, she accidentally tears the paper. Disappointed and frustrated, she decides to practice using plain notebook paper, but after a few more folds, the same thing happens. She continues to practice without success, until one Spring day, she’s inspired to paint a picture of the pretty flowers she sees in the park. Things are fine until her paint smears. After she dries her tears of frustration, she comes up with a creative solution to finish her painting by cutting shapes from her origami papers. And the finishing touch? A beautifully folded yellow butterfly! Bright, colorful, cut and torn paper collages nicely complement this satisfying story celebrating art, determination and mastering a new skill. Includes instructions for folding an origami butterfly.

GHOSTS FOR BREAKFAST by Stanley Todd Terasaki, pictures by Shelly Shinjo (Lee & Low, 2002). One night, the Troublesome Triplets, who are always together and known for their constant worry and complaints, pound on the young narrator’s door with frantic reports of ghosts in Farmer Tanaka’s field. Mr. Omi, Mr. Omaye and Mr. Ono wring their hands as they describe the terrible long, thin, white apparitions “dancing in the moonlight.” The boy’s father is amused rather than alarmed, as he waves his white shirt around the living room, mimicking a ghost with its “Wooooo, wooooo, wooooo.”

Since the Triplets refuse to show them the ghosts, the boy and his father must set out alone to settle things once and for all. Suspense builds as they walk down the dark country road, with the wind whistling and the fog rolling in from the sea. As they approach Farmer Tanaka’s field, they hear the unmistakable “Wooooo, woooooo, wooooo.” Yes, there were hundreds of ghosts! They manage to capture some of them to bring home to the panic-stricken Triplets. Will they faint dead away, or make some pickles with the daikon? A truly funny story set in a 1920’s California farming community about facing your fears, accompanied by droll blue and brown acrylic illos, which effectively depict the Triplets’ panicked expressions. This New Voices Honor Award winner is perfect for reading aloud and will likely induce many giggles.

SHIBUMI AND THE KITEMAKER by Mercer Mayer (Marshall Cavendish, 1999). An original fairytale about how Shibumi, daughter of an Emperor in long ago Japan, convinces her father to erradicate the inequities that exist between the privileged life she leads in her walled garden and the world outside. Growing up, Shibumi always assumed the city outside the garden was just as beautiful, as she often heard the sounds of children laughing and playing. One day, when she overhears them talking about her, she climbs a tree to look over the wall, and is shocked to discover the children are ragged and dirty, and most of the people live in squalor.

She decides to ask her father if the royal kitemaker could make her a kite. Wishing to please his mysteriously sad daughter, he agrees. The kitemaker makes several kites, larger and larger to satisfy Shibumi, until one day she ties herself to one of them and flies it from the highest tower. The fearful, enraged emperor is told that Shibumi will not come down until the “city below her is as beautiful as the palace, or the palace is as squalid as the city.” The emperor announces he will rebuild the city, but wealthy noblemen, opposed to any change in the status quo, attempt to kill the kitemaker, who jumps from the tower onto Shibumi’s kite. A wind carries them away and they disappear from sight. For years, the distraught Emperor tries to make amends and he does keep his promise to do right by the people. Eventually, a young samurai goes on a quest to find the lost princess and kitemaker, and he brings her back to reunite with her old, tired father. Older readers will appreciate this suspenseful tale and the highly detailed, lush computer-generated illustrations depicting Japanese feudal life with its bonsai trees, elaborate kimonos, cranes, cherry blossoms, samurai and weaponry. 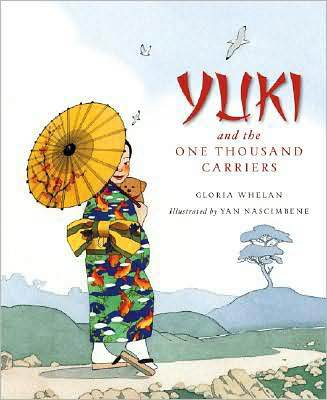 YUKI AND THE ONE THOUSAND CARRIERS  by Gloria Whelan, pictures by Yan Nascimbene (Sleeping Bear Press, 2008). In 17th and 18th century Japan, provincial governors were required by law to spend half of the year in Kyoto (home of Emperor), and half of the year in Edo (modern-day Tokyo, seat of the Shogun). They traveled between cities along the 300-mile Tokaido Road, in large entourages consisting of between 1000 to 3000 carriers. Yuki describes her first such journey with her family in lyrical prose and interspersed haiku, which beautifully express her feelings of longing and homesickness, crystalizing key moments. It is a long trip requiring them to climb steep mountain roads covered with snow, cross a river, and trek beside an ocean.

Yuki describes the sights and sounds of the magnificent landscape, as well as the food and accommodations of some of the 53 inns they stop at along the way. Yuki’s tale was inspired by an exhibition of Hiroshige woodcuts, and Nascimbene, with his delicate, uncluttered watercolor illos, does a beautiful job of depicting the serene majesty of this massive undertaking. There is delicious mention of their dinners in an eight-mat room (bean curd soup, sushi, shrimp, dumplings, pickled ginger, carp), and a fishing village (broiled eel, shark, octopus). The combination of elements (especially the inclusion of haiku), successfully evokes a distinctive Japanese sensibility. Simply lovely. 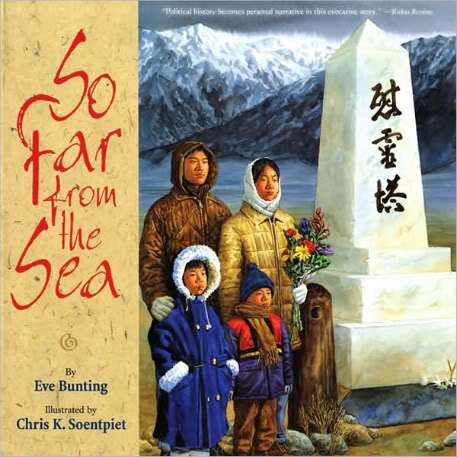 SO FAR FROM THE SEA by Eve Bunting, pictures by Chris K. Soentpiet (Clarion, 1998). Laura Iwasaki poignantly recounts the last trip she and her family took to the Manzanar War Relocation Camp to visit the gravesite of her grandfather. Bundled in warm clothing, Laura, her brother Thomas, and her parents walk through the now barren site where her father lived for three and a half years, and where 10,000 people were once interned. Both parents recall life at the camp as the children listen quietly. Soentpiet’s stunning watercolor illustrations alternate between black and white (to depict past scenes) and color (for the present). When the Iwasakis reach the cemetery, they see the black and white obelisk, a “Memorial to the Dead,” around which people have placed offerings such as origami birds, wood, and stones. Laura spots her grandfather’s grave and reflects on what she knows: he was a tuna fisherman who lost his home, his boat, and his dignity. Finally, she leaves a special memento which signifies that he was “a true American.” A moving, personalized account of a dark chapter in the nation’s history.