“Direct yourself to greatness. Answer your calls. Answer to yourself.” ~ Warren Brown, founder and owner of CakeLove 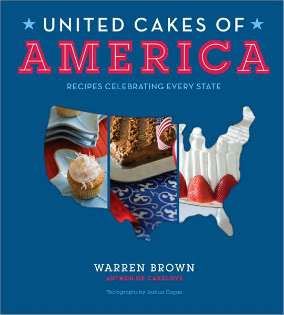 Far be it from me to seek out certain cupcakes just because the baker happens to be extremely dishy  fair of face. *cough*

I’m all about serious research, focus, eyes on the product, heart in the food. Remember Bakeshop owner Justin Stegall? I only found out how cute he was after the fact (and six divine cupcakes). While I love researching the backstories of all these bakers, in the end, it’s supposed to be about the cupcakes. Right?

I didn’t know anything about CakeLove’s Warren Brown before embarking on these Cupcake Capers back in March. I had not seen him on Food Network’s Sugar Rush (2005-2007), nor did I know about his popular cookbook, CakeLove (2008). I actually learned about Mr. Brown because of the recent Washingtonian Cupcake Cup (Georgetown Cupcake took top honors yet again).

It turns out our Mr. Brown has quite a fascinating story. A graduate of Brown University (history major) and George Washington University, where he earned his law degree and Master’s in Public Health, he gave up law in 2000 to pursue his true passion — baking! He opened a little bakery on U Street downtown, and now, eight years later, he’s built a mini bakery empire with seven locations in the D.C. area and Baltimore. Quite an accomplishment for this self-taught baker-turned-inspirational-entrepreneur, who had the foresight, smarts, and guts to capitalize on our boundless love for all things cake, as well as the reverence, nostalgia, giddiness, and fantasy that goes with it. 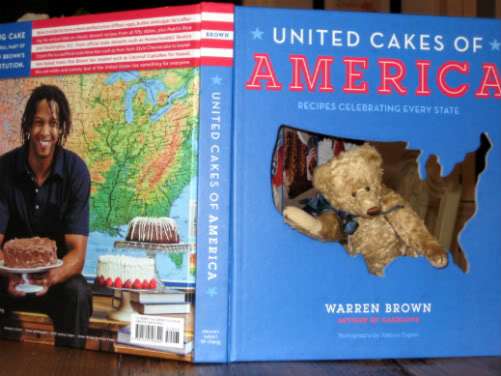 Cornelius loves the cut-out of the U.S. map on the front cover.

When I heard Warren was doing a booksigning for his second book, United Cakes of America (Stewart, Tabori & Chang, 2010) at Barnes & Noble a few days ago, I zipped right on over. Had to see him. Had to tap into his magic. Lots of other people fantasize about opening a bakery. How and why did he succeed on such a grand scale?

In short — charm, charisma, genius business sense, natural leadership skills, genuine love for and dedication to the art and science of baking, acute understanding of what people want and need, expansive thinking, solid work ethic, herculean stores of energy, a killer smile, and those dang cute dreadlocks. This guy has got the chops and is tuned in big time.

He’s also the thinnest baker I’ve ever seen. And tall. And yes, ladies, he is very easy on the eyes. Is there anything sexier than a man in the kitchen? Especially one who advocates baking from scratch, and taking your time to add the crucial ingredient, love, to every recipe you make? 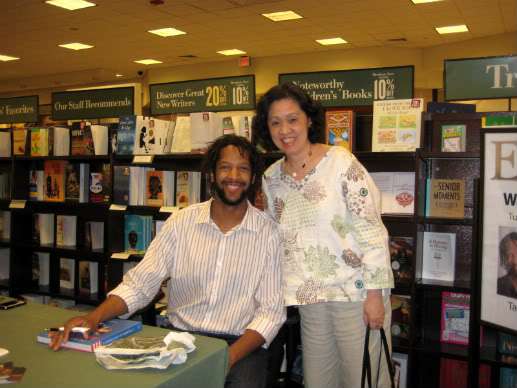 He started out by reading this Preamble from United Cakes of America:

We the people who love cake, in order to bake a more perfect dessert, reestablish the standard that true cake is baked from scratch, ensure the use of natural ingredients, provide for the common consumption of dessert in moderation, promote comfort foods, and secure the blessings of sharing dessert with friends and foe, do ordain and establish this Constitution for the United Cakes of America.

These tenets are established to maintain the highest standards of dessert, create the opportunity to choose cake that actually tastes good, dedicate time to enjoy the fruits of the kitchen, and bestow upon all with curious and ravenous appetites just cause for decadence and tranquility. To this end, we believe desserts should be baked and shared and recipes recorded and reinvented so that they’re better understood and widely consumed. Cake belongs to us because it brightens the smiles of all persons on Earth.

Make CakeLove and prosper from the bounty of happiness that accedes to it. Ours is a labor of love destined for consumption. Scratch-made baking conceals nothing, awakens only innocent desires, and awaits judgment by those who want sweets.

This is our truth. It is right. All are invited to share.

The book contains recipes representing all 50 states, the District of Columbia and Puerto Rico. Criteria for inclusion: history, tradition, official state desserts, unofficial favorites. He’d been collecting, updating, and putting his own spin on these since he first got the idea back in 2003-2004. In addition to cakes, he’s included regional specialties like Pumpkin Pancakes (New Hampshire), Whoopie Pies (Maine) and Roasted Pecan Cornbread (Iowa). Some of his personal favorites: Sweet Potato Cake (Louisiana), Chocolate Sauerkraut Cake (Michigan), Hoosier Cream Pie (Indiana), Jalapeno Cheddar Cheesecake (Arizona). Sprinkled throughout are juicy little sidebar tidbits (I like that he mentions haupia with Coconut Cupcakes for Hawai’i), evidence of his love for historical/cultural trivia.

Unassuming though clearly passionate about his work, he also offered baking tips: always use a kitchen scale to measure ingredients, non-stick pans are a no-no, as are low-fat, fat-free or artificial ingredients. This is a man who is fascinated (he admits to being obsessed) by the molecular structure of butter, sugar, eggs and flour. What combination of ingredients best supports certain flavors? The kitchen is his laboratory, and he loves to experiment.

Here’s what I found especially interesting: he’s selling dessert, and he addressed the importance of maintaining good health. “Exercise!” he reminded us several times. Eat your cakes during the day when you’re active, rather than right before bed. It’s unrealistic for most people to give up sugar completely. To keep dessert in our lives (who would want it any other way?), it’s crucial to practice moderation and stay active to achieve a healthy balance. Good advice.

I agree that “baking is an act of love and done to bring pleasure to the world,” and that “baking from scratch is one of those disappearing arts that deserve preservation.” He’s spot on when he says, “the real beauty of the cake is in the spirit it evokes. Presenting one quiets a room and brings focus on the guest of honor. Eating cake is intensely personal, awakening the memories we hold dearest.”

These days, when he’s not overseeing the World of CakeLove, preaching its gospel (catch him on the Today Show June 30th), or writing new books (he’s working on a brunch cookbook), he loves to spend time with his 4-month old daughter, Poplar. He is clearly a proud father, beaming when he talks about how calm a baby she is, happy to share a picture of her on his cell phone at my request. She was, as expected, absolutely adorable. “She’s a piece of Cake!” said a woman behind me. “And her first word will be cake,” I added.

Then we all swooned some more and the inimitable Mr. Brown signed our books. BTW, what type of cake is most commonly associated with your home state? Part of the fun of this book is trying to guess ahead of time. I was surprised with Pineapple Upside Down Cake for Virginia (partly a Colonial thing, partly because of a Dole Pineapple contest winner from VA). 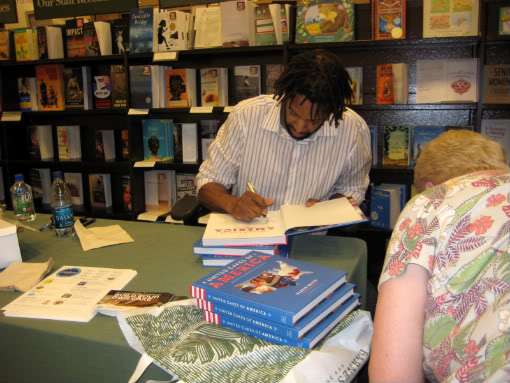 This woman is a serious CakeLove fan. She purchased at least a dozen books!

Check out this “Welcome to CakeLove” video:

♥ Coming Soon: I taste CakeLove cupcakes for the first time!

♥ Be sure to visit CakeLove.com for more about Warren’s journey and his parallel career as a motivational speaker, podcasts with recipe demonstrations, and info about both cookbooks. Read “Cake Passion” for a big serving of inspiration.