“I have this theory that chocolate slows down the aging process. It may not be true, but why take the chance?” ~ Anonymous

Before I read today’s poem, I had never associated Chekhov with chocolate.

Cherries, maybe, even oysters or seagulls. But not chocolate.

Still, this narrative poem by Louis Simpson, based on a real-life incident, has increased my admiration for Chekhov considerably, assuring me that if I had been one of his guests, honored to be in his presence yet intimidated by his genius, I would have happily shared my own chocolate legacy. But more on that in a bit. 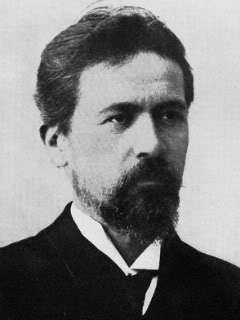 Once some people were visiting Chekhov.

While they made remarks about his genius

They were astonished, and silent.

He repeated the question,

whereupon one lady plucked up her courage

“Tell me,” he said, leaning forward,

light glinting from his spectacles,

“what kind? The light, sweet chocolate

or the dark, bitter kind?”

They spoke of cherry centers,

of almonds and Brazil nuts.

they interrupted one another.

For people may not know what they think

about politics in the Balkans,

or the vexed question of men and women,

but everyone has a definite opinion

about the flavor of shredded coconut.

Finally someone spoke of chocolates filled with

liqueur, and everyone, even the author of Uncle Vanya,

was at a loss for words.

As they were leaving he stood by the door

and took their hands.

In the coach returning to Petersburg

they agreed that it had been a most

~ from Caviare at the Funeral (Oxford University Press, 1981)

This poem got me thinking that most everyone can probably characterize the defining moments of their lives in terms of chocolate. While I can’t remember the very first piece of chocolate I ever had, I do know that Hershey, Nestle, and I were good friends when I was little.

See’s Candies by roboppy/flickr. Which one is your favorite?

There was something magical about breaking one of those bars into neat little rectangles and popping them in my mouth one by one. For Christmas, Grandma Yang sometimes gave us an entire box of Hershey Kisses, and my mainland Auntie upped the ante by sending us a coveted 5-lb box of See’s from California. My first choice was and still is the milk chocolate rum nougat! And what about the fun of Whitman’s Samplers? Finding the candy that matched the picture on the chart was always exciting. 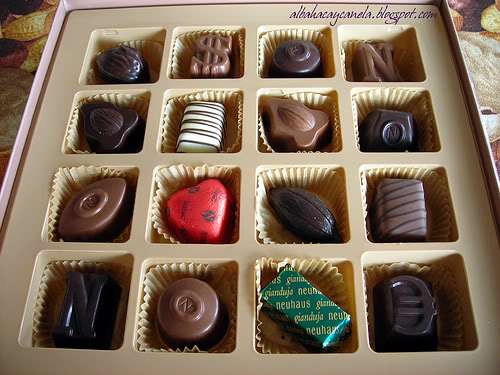 Neuhaus assortment by Akane86/flickr. I think the Belgians top the Swiss!

My college years, traveling to Europe during the summer, introduced me to Swiss chocolate — Toblerone and Lindt. On a trip to San Francisco, I enjoyed a rapturous fling with Ghirardelli. And while living in London, I freely sampled everything Cadbury had to offer.

Shortly after meeting Len, I went to Brussels during school break and brought back a box of Neuhaus chocolate. We agreed it was the best chocolate we’d ever had. Usually with a box of assorted pieces, there are some you like, some you don’t — but not this box. Every. Single. Piece. Was. Amazing. So smooth! So rich! Perfect!

And more recently, for this blog, I did some delicious research for Chocolate Month in February 2008, when I tasted some of the best gourmet chocolates around — the all organic Green & Black’s, other Belgian brands like Charlemagne and Nirvana, and my absolute favorite, Valrhona, which is handmade from select cacao beans (ah, the French again!). I’ve come a long way from those first Hershey bars, and I’m happy to report my chocolate odyssey is just beginning!

Now that I’m in a complete chocolate reverie, seduce me with your favorites. What’s the best chocolate you’ve ever had? Which inspires your best work?

Laura at Teach Poetry K-12 is our Poetry Friday host today. Pop on over and sample some of the scrumptious poems being shared in the blogosphere. Better lick off that chocolate smudge on your lip before you go.