“Molly sponged the spilled coffee. She took orders from the crew of a night train bringing lumber over Raton Pass. She tried hard to stay awake. But at four in the morning, when the baker arrived to start his work, she was lulled into dreams by the odors of yeast, sugar and fruit. She stood, leaning against the cup shelf, and saw pies, endless pies. Alice-in-Wonderland pies, dancing do-si-dos behind her shut eyelids.” (Chapter 6, When Molly Was a Harvey Girl). 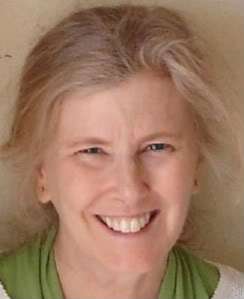 Author Frances M. Wood (above) was inspired by her great-grandmother, Jennie, who became a Harvey Girl in 1887.

If you were traveling in the Southwest on the Atchison, Topeka and Santa Fe Railroad in the late 1880’s, you’d probably stop to eat at a Harvey House lunch room or restaurant. You’d be mighty glad it was there — a spotless, efficiently-run establishment serving generous portions of delicious food at affordable prices.

Care for some warm cinnamon buns, a stack of orange pancakes, oatmeal with honey and a side of ham? How about a sandwich (meatloaf, corned beef or chicken salad), or maybe you’re in the mood for pork chops with gravy, a thick steak or hearty beef stew? Of course the coffee is always good — big urns of freshly brewed, steamy hot coffee ready to perk you up after those long hours on the train. For dessert? The pies here are cut in fourths. Mm–mmmmm!

And look who’s waiting on you — an attractive, intelligent, articulate young woman of good moral character and flawless manners, someone so efficient she anticipates your every need and serves it up in a heartbeat, with a warm, welcoming smile.

Before I read Frances M. Wood’s middle grade novel, When Molly Was a Harvey Girl (Kane Miller, 2010), I knew very little about the infamous Harvey Eating Houses (located near depots from Kansas to California), and the remarkably brave, resilient women who helped civilize the Wild West.

Ms. Wood seamlessly interweaves fact with fiction in this lively, thoroughly engaging, oftentimes mouthwatering adventure about 13-year-old Molly Gerry and her older sister Colleen, who leave their small town in Illinois to work as Harvey House waitresses in Raton, New Mexico. Moving is the last thing Molly wants to do, since she has an almost-beau in Streator, and she’s actually too young to be a Harvey Girl.

But Molly and Colleen are left penniless after their father’s death, so they must work. In order to pass for 18, Molly (who’s tall for her age) dons Colleen’s corset and Mama’s dress, and must thereafter pretend to be an adult. As if it wasn’t enough to leave her friends and safe, familiar surroundings behind, Molly wonders how they will survive out west, which, according to Billy the Kid and Company, is “a magnet attracting the most lawless of society: escaped convicts, murderers, and horse thieves,” with names like “Rattlesnake Sam, Hoodoo Brown, and Quick-knife Nance.” 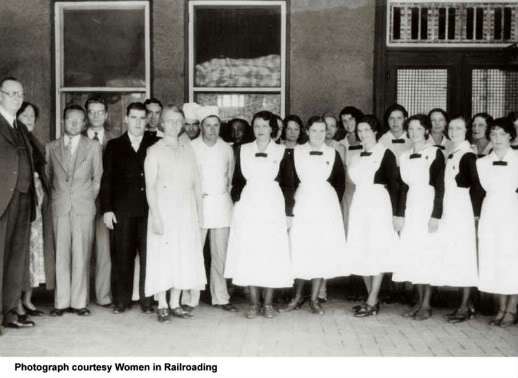 But if anyone can “tame” those desperadoes and all the dusty, rowdy, sometimes drunken ranchers, cowboys, miners, and railroad men, it’s the Harvey Girls, and Molly, like it or not, discovers just how demanding a waitress’s life can be. She’s frustrated and baffled by all the strict rules, on the job and off. A Harvey Girl is no ordinary waitress. She’s part of an elite cadre of specially trained women who are expected to uphold the company’s high standards of exemplary conduct at all times.

Will she ever fit in with the other girls and get used to life in the middle of nowhere? Be able to endure long shifts, learn to interact appropriately with the customers, and juggle multiple orders in record time? Keep up the ruse of being 18? Despite becoming quite good at her job, Molly soon realizes she hates being a waitress, and decides the only way out is to get Colleen married. Hence, the secret plan . . . 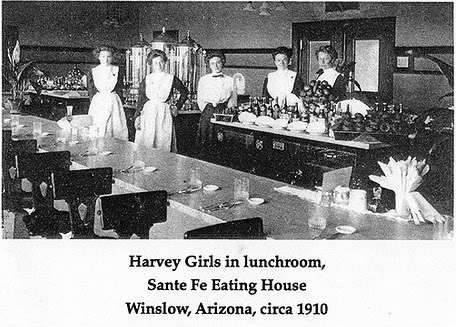 I loved being immersed in the world of this book; by virtue of its historical setting and vividly conveyed scenes, it’s generously laced with adventure, elements of danger, suspense, excitement, romance, and humor. I enjoyed meeting all the colorful characters who passed through or worked in Raton — especially Gaston (blustery, temperamental chef), Miss Lambert (housemother), Mr. Latterly (eyewear salesman), and Gaston’s two kitchen helpers, Josiah and Susana (who became Molly’s closest friends). Molly also gets to meet Buffalo Bill, and is endlessly fascinated by the possibility that Genius Jim, a famous train robber, might be lurking in their midst.

Of course I most loved all the passages describing the preparation, serving, and consumption of food, because they provided a good sense of how the Harvey Houses set the standard for excellence in the hospitality business before the advent of dining cars. Readers will be surprised by the quality and variety of dishes served (everything from roast beef sandwiches at the counter, to oysters, truffles, pan-fried mountain trout, pineapple fritters, pomegranate sherbet in the dining room), in a town far removed from “civilization.” I was happy to read that although Molly didn’t like waitressing, she loved cooking. The kitchen was “the one place in all of New Mexico where she didn’t have to be somebody or something other than herself.” When one of the trains gets stranded in a winter storm, guess what Gaston prepares? Lots and lots of SOUP! ☺ 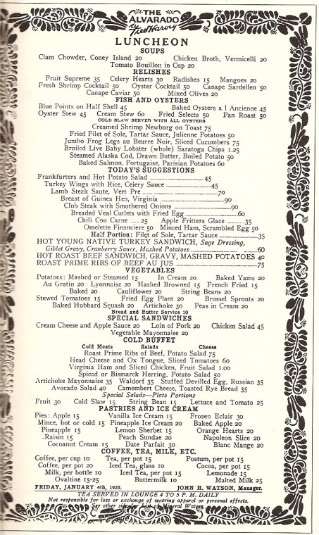 I liked the inclusion of multicultural characters (Mexicans and Indians could work in the kitchen, but would not be hired as waitresses), and the fact that Molly becomes aware of prevailing prejudices against these groups. Finally, it’s important for young readers to learn about this intriguing chapter of feminist history. The Harvey Girls were one of the first female workforces in the country, and were hired precisely because male waiters were undependable, often fought with the customers, and were themselves sometimes the target of violence and/or discrimination.

Yes, it took women to bring a sense of calm and order to the far West, to make men mind their manners! You will love reading about spirited and resourceful Molly, and will no doubt gain new respect for the Harvey Girls. Oh, what a good cup of coffee and a donut can do! Highly recommended and nominated (by me!) for a Cybils Award.

♥ Read more about the book at Frances M. Wood’s website. Great photos of the relatives who inspired some of the characters!

♥ Online review by Carrie at Reading to Know.

♥ Read about Fred Harvey and how he started America’s first chain restaurants here.

♥ Recent article in The Herald Sun with quotes from Frances.

*This post is brought to you by Frances and Fred (Harvey).

“Have a Sincere Interest in People. Remember ‘Travel follows good food routes.’ Real Service is Without Discrimination.” ~ from a Harvey Company manual

One thought on “blue plate special: when molly was a harvey girl by frances m. wood”