Happy Thanksgiving and Welcome Back!

I trust you’ve had a little time to nap, watch a football game, or chat with family and friends since we last sat down for Part One of our Thanksgiving Feast.

I’ll let you in on a little secret: while turkey and all the trimmings is just fine and dandy — for me, Thanksgiving is really about the PIES. Oh, you’re not surprised? Hmmmm.

We’re having pumpkin and apple pie today, but before I devour taste those, I wanted to serve up several more delicious picture books representing some of the traditional foods enjoyed on this gastronomic holiday. We can never have too much turkey, or can we? And we musn’t leave out corn, so important when remembering the Pilgrims and Native Americans. And there’s always squash . . .

But first, let’s express our gratitude. 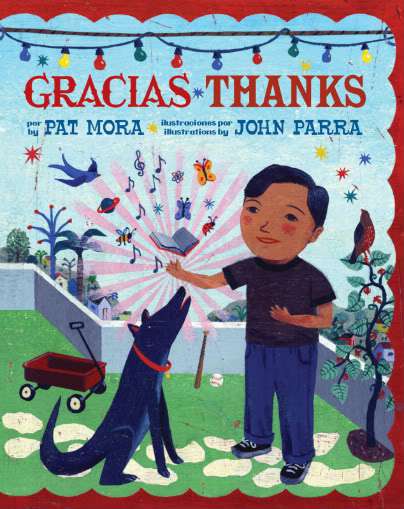 GRACIAS: THANKS by Pat Mora, pictures by John Parra (Lee & Low, 2009). In this charming bilingual book, a multiracial boy lists some of the things he is most thankful for: “For the sun that wakes me up so I don’t sleep for years and years and grow a long, white beard, thanks . . . For the bees that didn’t sting me and turn me into a pincushion, thanks. . . For the music of my uncle and his guitar that turns our dogs into howling singers, thanks.”

The childlike expression and perceptions are spot on, and the acrylic on illustration board folk art style pictures are festive, richly-hued, lively, and simply gorgeous. The engaging details and textures of the illos amplify the busy, wonder-filled, joyous playfulness of the boy’s everyday life, and will likely prompt readers to look more closely at the things around them and compile a list of their own. And what about this: “For my little brother, who threw mashed peas at my sister and made me laugh so hard I fell off my chair, thanks.” My favorite though, is this: “For the chocolate Dad melts into thick syrup we call warm mud when we pour it on vanilla ice cream, thanks.” Yes, for this lovely book, thanks! Gracias! (Nice review at 7-Imp.)

Okay, put on your bibs, it’s time for more food!

CRANBERRIES by William Jaspersohn (Houghton Mifflin, 1991). A wonderful introduction to the cultivation, harvesting, and distribution of cranberries — one of only three fruits native to North America (other two are Concord grapes and blueberries). The clear, straightforward text, accompanied by fascinating photographs, provides a unique glimpse of the small red fruit that graces almost every Thanksgiving table in America. Especially interesting are the practices of dry and wet harvesting. Cranberries corraled in bogs, with their swirling patterns, are a beautiful sight. Put on your hip boots and get in on the action!

ANNA’S CORN by Barbara Santucci, pictures by Lloyd Bloom (Eerdman’s BFYR, 2002). Anna and Grandpa share a special bond, and enjoy walking together through the cornfields. Grandpa teaches Anna how to be still and cup her hand behind her ear, so she can hear the music of the corn. As the wind breathes through the dried corn stalks, Anna hears a whisper, then a raspy sound, a crackle which reminds her of Grandpa’s voice.

Grandpa grabs a cob, opens it, and gives Anna some dried kernels, asking her to promise to plant them in the Spring. That winter, Grandpa dies, and Anna misses him terribly and grieves. When Spring comes, she refuses to plant the kernels Grandpa gave her, afraid they would be buried and gone forever. Her mother reassures her the kernels will not be lost, just changed, and after much thought, Anna decides to keep her promise. A gentle story about loss, hope for new life, and the healing power of memories.

OH MY, PUMPKIN PIE! by Charles Ghigna, pictures by Kenneth Spengler (Random House, 2005). This one’s actually a Step-into-Reading title that captures the joy of pumpkins in its many sizes, shapes and uses. Beginning readers will enjoy sounding out the rhyming couplets that bounce merrily from page to page: “Pumpkins round as basketballs. Pumpkins flat as old beach balls. Pumpkins striped in shades of yellow. One looks like a large marshmallow!” Of course there are pumpkin muffins, bread, pie, butter, and roasted pumpkin seeds to satisfy rumbling tummies. A wonderful celebration of the season.

CARLOS AND THE SQUASH PLANT by Jan Romero Stevens, pictures by Jeanne Arnold (Rising Moon, 1993). Carlos enjoys tending the vegetable garden alongside his brother and father on their New Mexico farm, where they grow watermelons, sweet corn, tomatoes, small green chiles, and his favorite vegetable, squash. He likes squash because his mother uses it to make a spicy dish he likes called calabacitas. 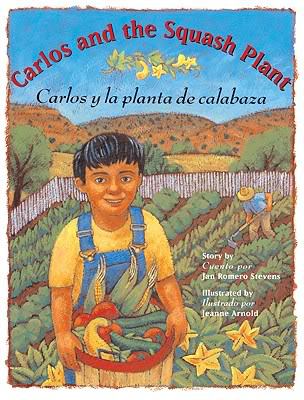 Carlos is a hard worker and gets pretty dirty, but he hates to take a bath. He especially hates washing his ears. He ignores his mother’s warning that if he doesn’t wash his ears, a squash plant will grow in them, and only pretends to bathe (he wipes his face with a washcloth). Carlos soon feels an itch in his ear, and yes, a little plant begins to grow. Each day, as it grows larger, Carlos must wear a larger hat to cover up. After it grows to be several feet long, and he is unable to break it off, what does Carlos do? Well, he does get to eat calabacitas at the end, and his mother’s recipe is included. *checks ears* 😉 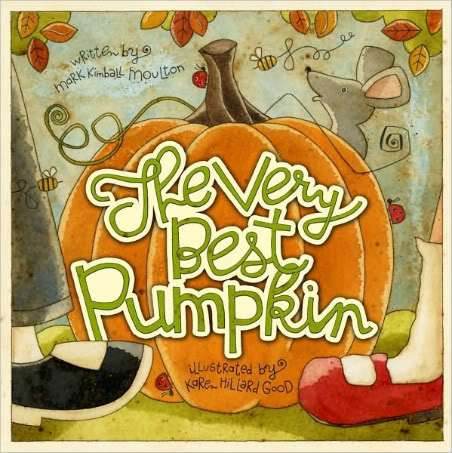 THE VERY BEST PUMPKIN by Mark Kimball Moulton, pictures by Karen Hillard Good (Simon & Schuster, 2010). Young and/or aspiring pumpkin farmers will appreciate this story of cultivating friendship. Peter lives on Pumpkin Hollow Farm with his grandparents, where they grow strawberries in the spring, corn in the summer, and lots and lots of pumpkins in the fall. One day, while tending his pumpkins, Peter notices an odd vine that twists and travels to the far end of the field. At the very end, he finds a small pumpkin all by its lonesome. He continues to care for this special pumpkin, and eventually finds just the right person to give it to — a shy girl named Meg who had recently moved in next door. Cheery illos rendered in watercolor, instant coffee and bleach make this a pleasant harvest/autumn read aloud. Includes Peter’s Guide to Growing Your Own Very Best Pumpkin.

I’M A TURKEY by Jim Arnosky (Scholastic Press, 2009). Ever wonder what it would be like to be a wild turkey? Follow Tom the Turkey and his flock as they take off, flock, putt, peep, squawk, squabble and flee from hungry animals in this lively, playful spoken-word song. The simple rhyming text makes for a lively, boisterous read-aloud, and the song can be downloaded from the internet. Perfect way to talk turkey and get some serious gobble on. 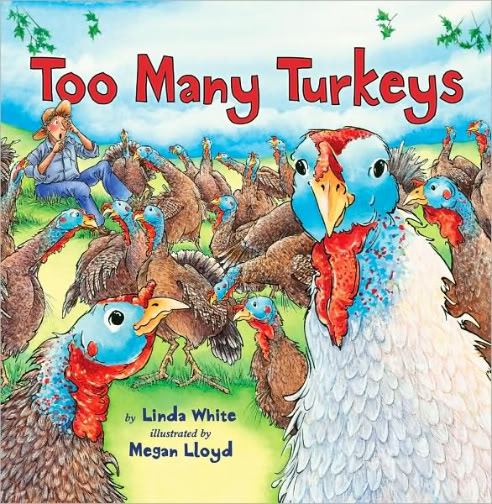 TOO MANY TURKEYS by Linda White, pictures by Megan Lloyd (Holiday House, 2010). When a little stray turkey wanders onto Fred and Belle’s farm, Fred is keen to adopt it, despite Belle’s warning that it would eat her garden and make a mess. Belle soon changes her mind when she discovers the turkey (Buford) actually makes everything in her garden grow much better. All the neighbors want to know the secret behind her flourishing flowers, vigorous vegetables and bountiful berries, but Belle won’t tell. When she goes away for a few days, she leaves Fred in charge. All is well until a hen turkey stumbles into the garden to eat Belle’s cucumbers. Birds of a feather more than flock together, as hordes of turkeys swoop down on Belle’s garden. Fred has a fine time trying to keep them away; nothing works until he gets a little help from the neighbors in exchange for Belle’s gardening secret. A fun, lively story that’ll make you flap your wings with joy. Warning: may induce gobbling and/or wattle wiggling.

AMELIA BEDELIA’S FIRST APPLE PIE by Herman Parish, pictures by Lynne Avril (Greenwillow, 2010). A younger version of the literal minded minx is visiting her grandparents one fine autumn day, when Grandma decides it would be the perfect time to teach Amelia how to bake an apple pie. During a trip to the Farmer’s Market with Grandpa, Amelia meets Granny Smith and lots of other red, yellow, orange, pink, and green apples, with names like Blaze, Royal Gala, Golden Nugget, and Greensleeves.

She watches Grandma peel and cut the apples into eight pieces each and sprinkle them with sugar and cinnamon. She helps Grandma get the ingredients for the crust, and watches her roll out the dough. After the apples are placed in the pie pan and Grandma begins cleaning up, Amelia rolls out dough to make her own pie in a tiny pan, then secretly slips it into the oven when Grandma takes the big pie out. Alas — no one gets to taste Grandma’s pie, because when she puts it outside to cool, the birds devour it. Trying to console themselves with ice cream, Amelia’s family bemoans the loss of such a fine pie, until her father smells a fresh pie baking in the oven. Tiny pieces = big flavor ☺. Includes Amelia Bedelia’s Apple Pie Recipe.

Thanks for feasting with us today. What’s that? You’d like more pie? No problem. Click on the little pie below for a whole list of Upper Crust Pie Picture Books I cooked up awhile back.