“One of the secrets of life is that all that is really worth the doing is what we do for others.” ~ Lewis Carroll 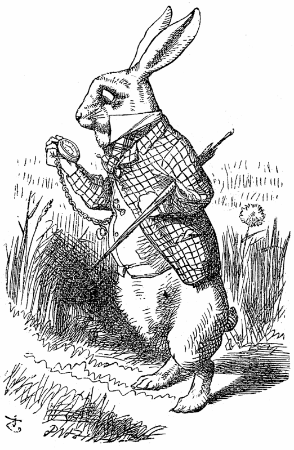 Just for today, you may don your favorite hat and go completely MAD! (As if you need an excuse.) Best of all, you must drink copious cups of tea! 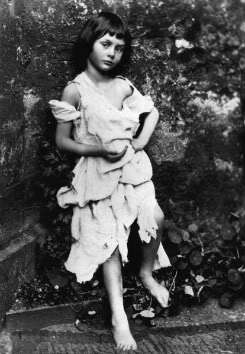 I wish I could remember how old I was when I first read Alice’s Adventures in Wonderland (1865) and Through the Looking-Glass and What Alice Found There (1872). It’s possible I saw a movie version first. Nevertheless, I did have a crush on the Cheshire Cat for a long time, and longed to be able to eat or drink something that would make me bigger or smaller at will. 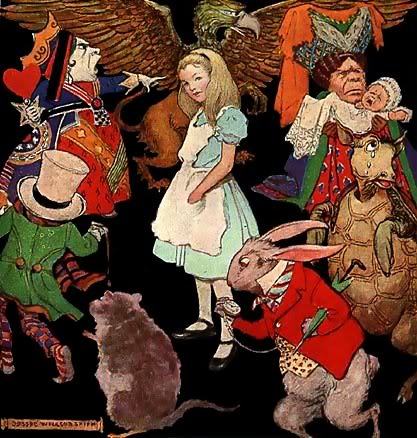 I’ve been thinking about my favorite children’s classics where food plays a substantial role — all the wonderful Yorkshire cooking in The Secret Garden, the bountiful picnic hampers in The Wind in the Willows, Almanzo Wilder’s Sunday dinner in Farmer Boy (rye ‘n’ injun bread, chicken-pie, apple pie, pumpkin pie), all that candy in Charlie and the Chocolate Factory, the attic feast in A Little Princess, those glorious banquets at Hogwarts and the special candies only available to wizards (jelly slugs, fizzing whizzbees, fudge flies) — all lip-smackingly fabulous, but none of these foods came with the charming and ponderous entreaties: “Eat Me,” “Drink Me.” 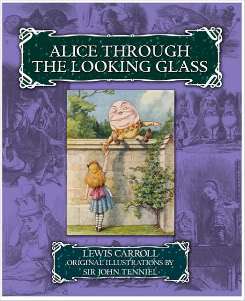 On her way down the rabbit hole, Alice grabs a jar of Orange Marmalade from one of the shelves, disappointed to discover it’s empty. But once she’s in the hall of doors, she finds the “Drink Me” bottle. Assuring herself that it’s not poison, she discovers it has a mixed flavor of “cherry-tart, custard, pine-apple, roast turkey, toffee, and hot buttered toast.” How I would love to taste that!

But my favorite part is when she finds the cake:

Soon her eye fell on a little glass box that was lying under the table: she opened it, and found in it a very small cake, on which the words `EAT ME’ were beautifully marked in currants. `Well, I’ll eat it,’ said Alice, `and if it makes me grow larger, I can reach the key; and if it makes me grow smaller, I can creep under the door; so either way I’ll get into the garden, and I don’t care which happens!’

She ate a little bit, and said anxiously to herself, `Which way? Which way?’, holding her hand on the top of her head to feel which way it was growing, and she was quite surprised to find that she remained the same size: to be sure, this generally happens when one eats cake, but Alice had got so much into the way of expecting nothing but out-of-the-way things to happen, that it seemed quite dull and stupid for life to go on in the common way.

So she set to work, and very soon finished off the cake.

Not only does this food taste good, but you can be 10 inches one moment, nine feet tall the next! I also love the Queen of Hearts and her stolen tarts, that famous mushroom with dual size-changing capabilities, the dormouse with his fondness for treacle tarts, the bread and jam served at the Mad Tea Party (I’ll pass on chewing my teacup, thankyouverymuch), those poor oysters invited to dinner by the Walrus and the Carpenter, and best of all, Mock Turtle’s “Beautiful Soup!” Perverse nonsense in Carroll’s topsy-turvy, unpredictable world, and food is a crucial part of the fantasy.

Treacle Tart by in vino veritas/flickr.

For the impoverished in Victorian society, food was the ultimate wish fulfillment. For any child facing the perils of growing up, wanting to be little one moment and grown-up the next, the Alice books provide a great playing field. Never mind the political, satirical undertones that have kept scholars guessing for over a century — these are rollickingly good stories, full of charming comestibles, so many surprises, puzzles, poems, songs, and the most fascinating characters. I wanna be a playing card — off with their heads ☺!

I wonder what Carroll himself would have thought of the many film adaptations of his books? Just as the events of the stories kept Alice on her toes, Carroll’s life has continued to fuel controversy among historians. What was up with those nude photographs of little girls? Is it true he stammered only in the presence of adults, but was fine with children? Was he in love with Alice Liddell? Why did he (Charles Lutwidge Dodgson) refuse to publicly acknowledge that he was indeed Lewis Carroll? No booksignings for him! But we do know he was a man who loved games and puzzles, and he’s certainly succeeded at keeping us guessing all this time. Curiouser and curiouser.

Final page of Alice’s Adventures Underground, illustrated by Carroll for Alice Liddell. Originally contained a photo of Alice (left); Carroll’s own drawing later discovered hidden underneath (click on right side image to enlarge).

On this very important date, please enjoy what remains of the very first film version of Alice’s Adventures in Wonderland, directed by Cecil Hepworth and Percy Stow. Made in 1903, just 37 years after the book was written, and eight years after the birth of cinema, it’s remarkable for so many reasons. The original was only 12 minutes long, but at the time, the longest film ever produced in Britain. Eight minutes of the severely damaged film have been restored by the British Film Institute National Archive. Interesting that no professional actors were used; the woman playing Alice worked at the Hepworth Studio as a secretary and errand person, and the Chesire Cat was played by a family dog! Hepworth insisted that they stay true to Sir John Tenniel’s original illustrations, so they had to make a lot of costumes beforehand.

Don’t you want to reread the Alice books now? Have some more mad tea before you go (beware the “jaws that bite, the claws that catch”).

♥ Be sure to watch this video of Gene Wilder as the Mock Turtle singing “Beautiful Soup.” A more beauoooooooooootiful sooooooooouuuuuuuup song I’ve never heard!

♥ Go here to see some of the different illustrated versions of the Alice books.

♥ For a short, fun quiz to test your knowledge of Carroll trivia, click here.