What better ‘first poet’ for our Poetry Month celebration than one who’s named, “April”? The always exuberant April Halprin Wayland, whose personal tagline is “1/2 poet, 1/2 author, 1/2 not good at fractions,” brings her own special brand of energy and expansiveness to everything she does, whether writing, teaching, storytelling, fiddle playing, doodling, sun farming, hiking, campaigning for peace or collecting clouds. Her fascinating, adventure-filled life has provided oodles of inspiration for poems and stories, and her sunny outlook has certainly brightened up the alphabet soup kitchen. We thank her for kicking things off! 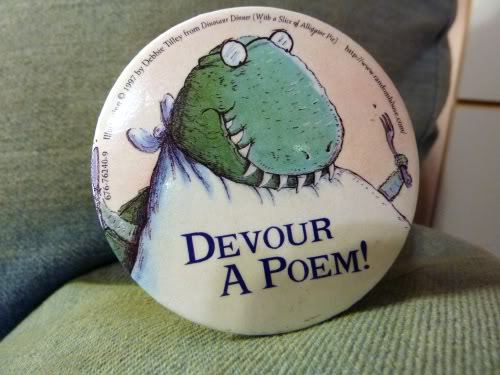 April: Poetry is a place where I clear the brush, rake the leaves, plant some violets, drag in an old log to sit on. Readers may not see the same things I see, or think the same things I was thinking when I wrote the poem, but they can sit next to me and breathe in the violets.

My book, GIRL COMING IN FOR A LANDING: A Novel in Poems (Knopf), based on my journals as a teen, is about a teen who writes poetry in secret; it includes tips to teen writers at the end. One poem is about waffles . . . and writing:

The T.V. talks in the other room,
the ironing board stands, hands on hips,
in the middle of Great Aunt Ida’s kitchen
and I sit on the burgundy booth in my p.j.s as
Great Aunt Ida makes waffles.

I love pouring batter onto the waffle iron.
It’s like writing poems —
from puddles to patterns.

If I stare at the black light
willing it to warm to red,
it takes forever.

Just like writing. Sometimes I have to
not write
in order to write.

So I slide around
the vinyl booth seat
to look out her second story window
at the birds.

I am waiting
for waffles.

Apparently, Myra Cohn Livingston was the one who suggested April write a collection of poems in the teen voice, and April says doing so set her free. Love that! And isn’t it so true about sometimes having to “not write” in order to write?

April: When my sister and I slept over at Grandma’s we’d make waffles. I remember her heavy waffle maker and the waiting, waiting, waiting for that red eye to light up. I think the waiting made them taste better. Yum! I wish I could say that Grandma used this Lemon Waffle recipe. But the truth is that after I wrote this poem, I searched for a good waffle recipe that did not use sugar (I don’t eat sugar), and found this wonderful one on a bed and breakfast site. (I love making pancakes with it, actually –)

I wrote the owners of the B&B, asking for permission to use the recipe; they were very kind, saying it was freely given to them and to pass it on — so I have!

Here in Southern California our lemon tree is overflowing with fragrant Meyer lemons. Meyer lemons have thin skins and are milder and sweeter than most lemons. 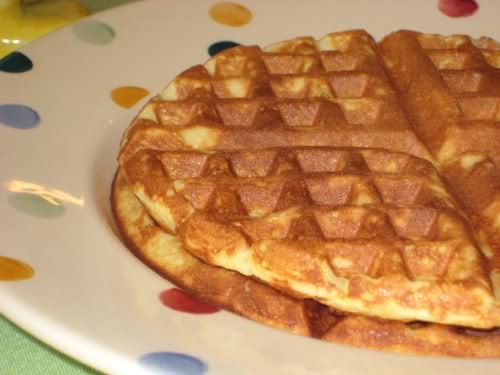 In a medium bowl, beat egg yolks with the honey. Blend in the lemon juice, lemon zest, and butter, beating well. Blend in the milk and flour alternately. Beat egg whites until stiff and fold into batter. Bake in prepared waffle iron until golden brown.

This batter can also be used to make lovely, light pancakes.

Jama’s note: Len and I really enjoyed these — light as lemony clouds, a delicate flavor, and no refined sugar. Definitely worth waiting for! ☺

April Halprin Wayland is a farmer turned folk musician turned author. Her newest picture book, NEW YEAR AT THE PIER: A Rosh Hashanah Story (Dial, 2010), won the Sydney Taylor Gold Medal awarded by the Association of Jewish Libraries. April’s work has been called “dazzling,” “honest, heartfelt, poignant,” and “utterly fresh and winning.” Her critically acclaimed novel in poems, Girl Coming in for a Landing (Yearling, 2004), her picture books, and her poetry have garnered numerous awards, including the Lee Bennett Hopkins Honor Award for Children’s Poetry, the Myra Cohn Livingston Award for Poetry, and MommyCare’s Book of the Year.

She’s been an instructor in UCLA Extension’s Writers Program for over a decade and teaches workshops in schools all over the world. You can find her online at her official website and the Teaching Authors blog. Don’t forget to check out April’s Poem-a-Day Challenge poems throughout the month here. I especially love that whenever a member of her family has a birthday, April writes “Happy Birthday” in raisins in the kitchen, and she’s the only poet I know who once wrote “I Love You” in ketchup on a dinner plate. ♥

One thought on “waffle-laden poet coming in for a landing: april halprin wayland!”