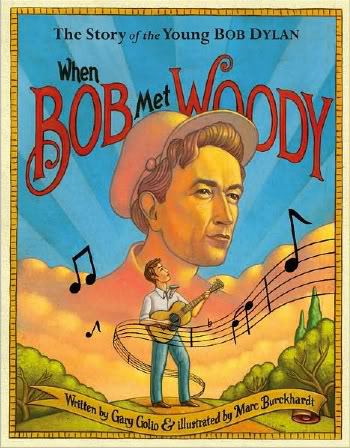 We could celebrate by listening to 70 of our favorite Dylan songs, singing “Like a Rolling Stone” seventy times, or by letting out 70 WooHoo’s! for this brand new picture book biography, When Bob Met Woody: The Story of the Young Bob Dylan (Little, Brown, 2011). (I vote for all of the above.)

Honey Babe, I was soooooooo excited when I first heard this book was coming out, but disappointed when I couldn’t get my hands on a review copy — until the ever thoughtful and generous Jules of 7-Imp offered to share hers (kiss kiss hug hug love on that beautiful woman). Now, I’m no longer a sad-eyed lady of the lowlands, because I’ve devoured Gary Golio’s wonderful words and pored over Marc Burckhardt’s crackerjack illustrations. 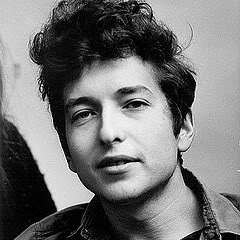 Even a casual fan knows there are tons of books published about Dylan (latest count: approximately 1000 titles in English), including biographies and retrospectives, songbooks, photo albums, graphic interpretations of his lyrics, collections of articles and interviews, academic analyses of his ouevre by hardcore Dylanologists, even an encyclopedia containing every bit and bob about Bob. And of course, there’s Dylan’s own critically acclaimed memoir, Chronicles, Volume One (S&S, 2005). So Mr. Golio’s task must have been quite daunting, sifting through the available resources and creating a narrative captivating enough to interest young readers who’ve probably never heard of our favorite Archbishop of Anarchy. And then there’s that little matter of Dylan fabricating parts of his life, especially his early years.

In his Author’s Note, Golio says:

As a boy, I was always looking for heroes, just as Bob was looking for Woody even before he’d ever heard of him. Babe Ruth, Leonardo da Vinci, Spider-Man, Amelia Earhart, and Harry Houdini — they were just a few of my inner stars, and I came to them for guidance, hoping to learn more of life’s secrets. But it was Bob’s search for his guiding star that inspired me to write this book.

So we read about young Bobby Zimmerman of Hibbing, Minnesota, the brilliant blue-eyed boy who taught himself to play the guitar and piano, who stayed up late listening to Hank Williams, Muddy Waters and B.B. King on the radio, who worked in his father’s store to earn money for records and an electric guitar. Music was both passion and refuge for the teenager who dreamed of traveling to faraway places and felt more and more like an outsider in his hometown. 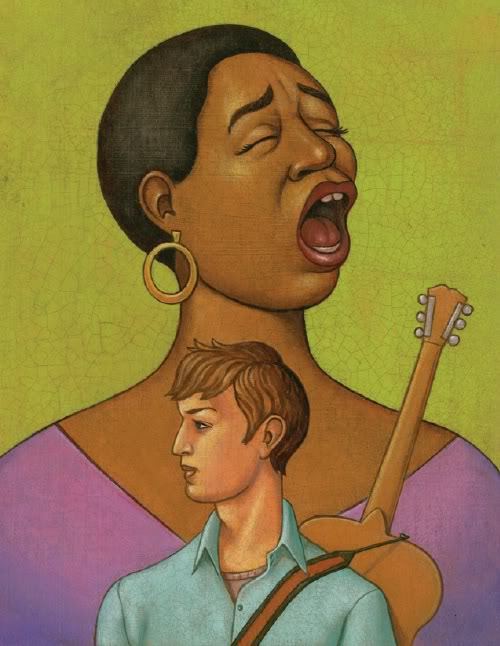 His was one of the few Jewish families in Hibbing, and he was teased by his peers. He seemed to eat, breathe and sleep music, told everyone he wanted to be a musician when he grew up, but no one took him seriously. Even his father thought music was a waste of time. When his band got kicked off stage at a school talent show for playing too loud, Bobby swore he’d be a bigger star than Elvis.

Dylan continued his self apprenticeship by listening to all kinds of music, including jazz, hillbilly and Lead Belly’s folk and blues. He started college in Minneapolis to please his parents, who wanted him to be an engineer. But he spent most of his time in the coffeehouses of Dinkytown, where “folk music was all the rage.” He was drawn to its purity and honesty, the “songs about real life, hard times, and hope.” After hearing Odetta, he traded his electric guitar for an acoustic, renamed himself “Bob Dylan” after his favorite poet Dylan Thomas, performed in local cafés, and continued to practice singing, playing and absorbing various forms of traditional music (ballads, sea shanteys, railroad songs, fiddle tunes).

When he finally heard Woody Guthrie’s records, he knew he’d found his true hero. He wanted to be a hard travelin’ singer, storyteller and songwriter just like Woody, who played for “striking miners and starving farmers.” By the time Dylan actually made his legendary journey to New York in 1961 to meet Woody, he knew all of Guthrie’s songs inside out.

Meeting Woody was life-changing in many ways, not the least of which was the fortuitous entree to the inside circle of leading Greenwich Village folk musicians like Joan Baez, Dave Van Ronk, and Pete Seeger, who not only influenced his music, but housed, fed, and helped him get gigs. It must have been a magical moment when Bob presented Guthrie with his special gift: singing for him one of the first songs he’d ever written, “Song to Woody,” using the melody from Woody’s song, “1913 Massacre.” Borrowing melodies, reworking tunes to new lyrics, turning things over, passing it on — all part of the rich tradition of folk music. The belief that songs are dynamic entities, subject to spontaneous reinvention and a wide swath of interpretation would subsequently become Dylan’s MO for live performances.

Young readers will be inspired by the young upstart who challenged the status quo to follow his passion. It is interesting to read about Dylan’s earliest musical influences; Golio’s lyrical prose nicely interweaves working class values, the lure of the outside world, and burgeoning social consciousness with the singular brand of emotional intensity, focus and ambition that characterized the young Dylan. When Bob Met Woody is a good primer on the makings of creative genius in its formative stages: it can take root in humble soil, sprouts from imitation and emulation, and eventually flourishes with dogged single mindedness. 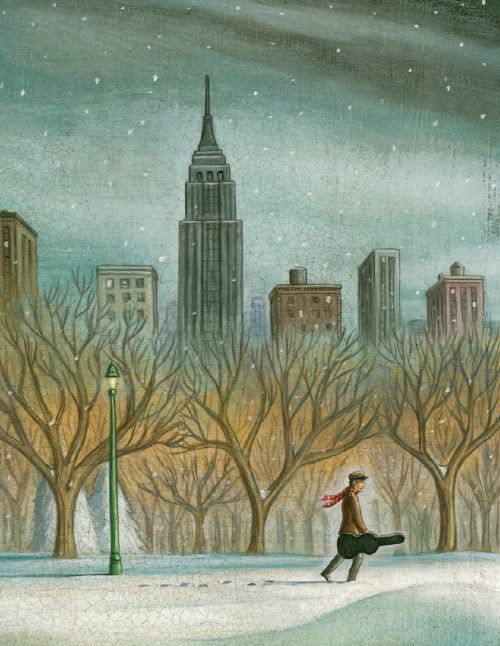 Marc Burckhardt’s fabulous illustrations — acrylic and oil on paper mounted on board — are rendered in rich, warm hues with a crackle finish, evoking classic Americana. Some of the more iconographic spreads resemble sixties album covers, my favorites being the one of a Woody Guthrie vinyl LP sun with burnt orange rays rising beyond the hills, and when you turn the page — a masterful portrait of Woody in the foreground with the sun’s glorious rays filling the sky. And don’t you love the cover image? Woody looms large in the clouds, a young troubador’s dream and North Star. The book contains both an Afterword and an Author’s Note, along with Source Notes. Share this one with the music lovers in your tribe, along with your favorite Dylan tunes.

We may as well top off this birthday post by listening to Bob and Woody. Guthrie’s “1913 Massacre” was written in 1941, the year Bob was born. It chronicles the true story of the tragic death of striking miners and their families during a Christmas party at the Italian Hall in Calumet, Michigan.

♥ Gary Golio’s official website. You probably know about his NYT Bestselling, multiple award-winning first PB biography, Jimi: Sounds Like a Rainbow. His next book is about John Coltrane!

♥ Marc Burckhardt can be found online at this website, MarcBurckhardt.com, and his blog, Drawger. If you’re not familiar with Marc’s stunningly gorgeous work, get thee hither immediately. The Official Texas State Artist for 2010, he was commissioned to create the official portraits for the 26th Rock and Roll Hall of Fame Induction Ceremonies, which you can see here. ETA: Marc has posted more spreads from the book in this Drawger post.

♥ Interesting audio feature: “Boy From the North Country: Bob Dylan in Minnesota” from Minnesota Public Radio. Interviews with people who knew him way back when, including one woman who tells what it was like to date Dylan. Swoon?

♥ What would you give Bob for his birthday? Some famous fans weigh in at The Guardian.

“Yes, to dance beneath the diamond sky with one hand waving free
Silhouetted by the sea, circled by the circus sands
With all memory and fate driven deep beneath the waves
Let me forget about today until tomorrow” ~ Mr. Tambourine Man