We’ve had lots more Dahlish excitement here in the alphabet soup kitchen. The other day, the copy of  The BFG  I’d won in Becky Levine’s recent giveaway arrived. WooHoo! I was absolutely thrilled because, love Dahl though I may, I did not own a copy of  his personal favorite. Now I can hardly wait to reread it, that is, if I can get my hands on it long enough.

You see, there’s this little matter of the Paddingtons. Over 30 of them live here, and they all love Becky. That’s because she voted them her favorite bear over Pooh a couple years back (Pooh who?).

They cheered when they saw her name on the padded mailer and then, I’m sorry to report, there was a little furry kerfuffle over who should read The BFG first. I wasn’t even in the running, and couldn’t distract them with a freshly made marmalade sandwich.

So, after I ate the sandwich (somebody had to), I dug into my newly arrived used copy of Memories with Food at Gipsy House, a cookbook Dahl co-wrote with his wife Felicity (Liccy). What better way to top off Roald Dahl Month than by trying one of the recipes he and his family enjoyed while living at their estate in Great Missenden, Buckinghamshire!

You’ll note the title of this cookbook contains the word, “memories,” and I happily read through family stories, anecdotes and assorted bits and bobs about Dahl’s childhood, holiday celebrations and travels with Liccy. I was tickled to learn Dahl shares my abiding belief:

A great meal is only fifty per cent great food and you remember it not so much for what you ate but for the person you were with and the ambience and the atmosphere and the surroundings.

Roald and Liccy had seven children between them when they married in 1983. It was fun imagining the rollicking good stories told at the 12-foot long pine farmhouse table, when children, grandchildren, other relatives and friends sat down to a meal. Liccy explains this table was so much more for Roald:

So, which recipe did I try? Well, a soup, of course. What I found quite interesting is that the Dahls always had a live-in cook — a woman between the ages of 20-30, who stayed with them for just a year and was treated like a member of the family. They were of varying degrees of competence, bringing recipes from their home countries, inventing new ones, blossoming under Liccy’s guidance.

I found the recipe for Smoked Bacon and Split Yellow Pea Soup following an essay in which Dahl explains why he loathes Christmas. The recipe came from Australian cook Sandy Andersen and is just perfect for this time of year with its autumn colors (red tomatoes, yellow peas, brown bacon, orange broth).

It was simple enough to make — pre-soak the peas for about an hour, brown the bacon and chopped veggies a little before adding the peas, tomatoes, garlic, bay leaf, parsley and chicken stock, then simmer for an hour or so. 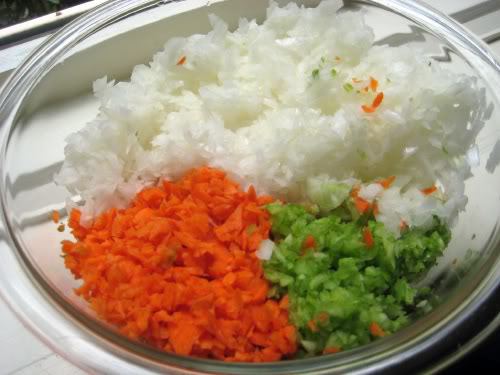 I followed the recipe to a “T” and expected a much thicker soup. There was no mention of puréeing it or simmering longer if one preferred something thicker, you know, like the proverbial “pea soup.”

This was my first time eating yellow split peas — they reminded me of corn kernels and were quite pretty floating around in the broth. They weren’t soft and mushy at all, leaving me to wonder what would happen if I simmered longer next time. But the flavor was good, the soup restorative and healthy, and I’ll definitely make it again. Of course I remembered Dahl’s story about heating up a can of pea soup in the fireplace and having it explode while he was at boarding school. ☺ 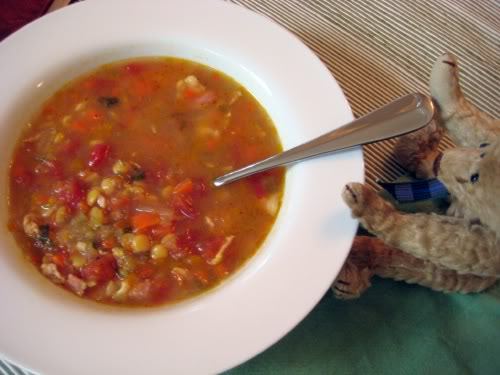 1. Place the dried peas in a bowl, cover with plenty of boiling water and soak for 1 hour. Drain before using.

2. Cut the bacon into strips.

3. Heat the olive oil in a saucepan and fry the bacon and the rind until lightly coloured.

4. Stir in the carrots, onions and celery and brown slightly.

5. Add the peas, tomatoes, garlic, bay leaf, parsley stalks and stock. Bring to the boil and simmer for 1 hour.

6. Remove bay leaf and parsley stalks, then season to taste with salt and pepper.

*Looks like you don’t have to be “neat” with the celery. ☺

**Adapted from Memories with Food at Gipsy House by Felicity and Roald Dahl (Viking, 1991).

When it comes to food, context is everything. An outrageously imaginative foodie in his books, an advocate of homegrown veggies and local sourcing in real life, the curmudgeonly Dahl continues to feed our fancies. Among his passions: the giant onions and flat broad beans he grew, Burgundy, caviar, and of course, chocolate. At the end of every meal, even after dessert, a Tupperware container of chocolate bars was passed around — Mars, Twix, Maltesers, Crunchies, and his ultimate favorite, Kit Kats. He apparently preferred his chocolate “straight,” rather than as a flavoring in cakes and ice creams, etc.

But back to The BFG. The heroine, Sophie, was named after Dahl’s eldest grandchild, who is today a popular cookbook author and novelist. It was the only time Dahl used a family member’s name in his books. Looks like I’ll have to kill more time checking out Sophie’s recipes —

Thanks again, Becky! This is especially for you: 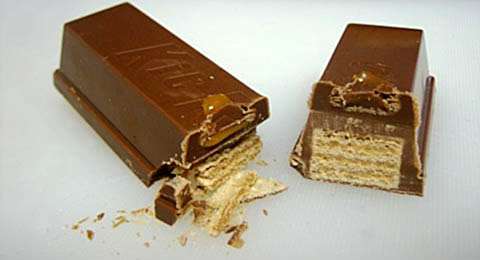