“Remember well, and bear in mind, a constant friend is hard to find.” ~ Laura Ingalls Wilder

I like to think of Laura as a good friend. I first “met” her as a shy child who devoured her books, and she’s remained a constant presence in my life as a reader, writer and human being.

I’ve enjoyed deepening my connection to Laura by learning more about the foods mentioned in the Little House books (via Barbara M. Walker’s Little House Cookbook), and making some of the recipes contained in The Laura Ingalls Wilder Country Cookbook (Trophy Press, 1997).  Some of you may know that this cookbook contains over 70 recipes compiled by Laura during the 30’s and 40’s when she lived with Almanzo at Rocky Ridge Farm in Mansfield, Missouri. 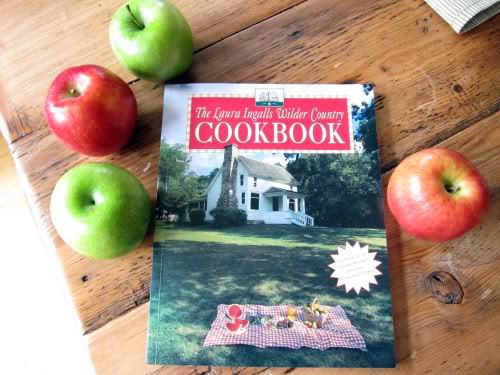 Last year, I made her Chicken and Dumplings and Apple-Upside Down Cake, and two years before that, her famous Gingerbread. To celebrate Laura’s birthday this year, I decided to try her Apple Slump, another of the six apple recipes included in the Country Cookbook.

Well, I’ve made cobblers, crisps, crumbles, and buckles before, but this was my first slump. It’s basically another cobbler variation that originated in the New England area, often considered synonymous with a grunt — although if you really want to get technical and all pie-litically correct, slumps are supposedly baked uncovered, while grunts are steam cooked (mostly on the stovetop). Just think in terms of a nice layer of fresh fruit cooked beneath a dumpling-like/biscuit dough.

Did somebody say dumplings?

Laura liked dumplings ☺, and so do I. See why we’re best buds?

But . . . her Apple Slump confused me a little and proved that when it comes to cobbler-type definitions, there’ll always be overlap and differences. That’s okay. Cobblers are supposed to be relaxed affairs, not known so much for their pretty appearance as for their taste, and yum is yum, no matter what you call it. Slumps were so-named because of their tendency to slump on the serving plate; grunts because of the sound the fruit made while cooking under the dough (socially acceptable behavior only if you’re a blueberry, peach, apple or cherry). 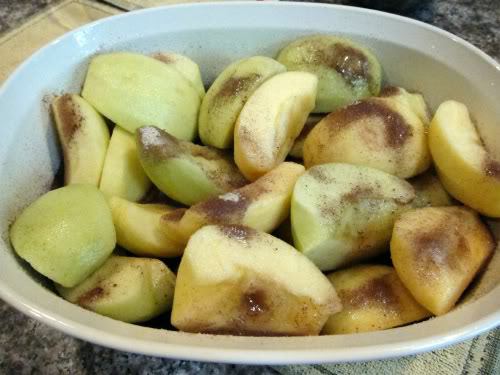 You know how Laura liked to do things her own way? Well, her Apple Slump is partially steamed, since the recipe calls for pouring a cup of vanilla water over the sliced apples before you cover them with the dough. You cover the dish with foil and bake for 30 minutes, and then remove the foil and bake uncovered for another 30-40 minutes. So you’re really slumping as well as grunting with this one.

Another puzzle: the recipe calls for 6 large apples, peeled, cored and quartered. How would you quarter an apple? Make 4 wedged slices, or cut the apple in half, then in half again, crosswise?

The moustached leprechaun and I had a spirited discussion about this. My first instinct was to cut the apple in half, then in half crosswise rather than lengthwise. Either way, you’d get large pieces, so it made sense that Laura wanted to partially steam the apples in the baking process. I bowed to the engineer’s advice and went with four wedges.

The biscuit dough was easy to make, though mine came out softer and stickier than it should have, making it tricky to “pat dough into shape to fit top of casserole.” I interpret this to mean you could actually pick up the dough and shape it with your hands (no rolling out, as this would make the slump a pandowdy). I added a little more flour, but the dough was still too soft, so I spooned and spread it out over the apples, neatly tucking in the edges. 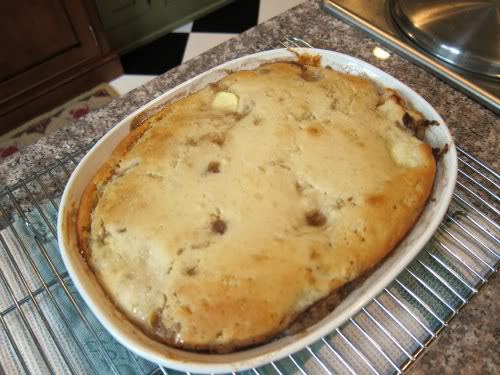 Turns out I needn’t have fussed so much, since everything baked up beautifully and tasted even better. Those three teaspoons of baking powder and 1/2 teaspoon of baking soda ensured that the slump had a nice, fluffy dough pillow. Pat, pat. You know how it is with cobblers and such. While still warm, heap it onto your plate or pile it into a bowl, then top with whipped cream or ice cream, and watch it melt ever so slowly. Mmmmm!

4. Pat dough into shape to fit top of casserole dish and put over top of apples. Cover lightly with foil.

Whenever I make one of Laura’s apple recipes, I always think about how hard they worked to plant the hundreds of trees in their orchard. “The Wilders took such a personal interest in their orchard that they could discuss the individual trees. If Almanzo mentioned ‘the tree that leans to the north,’ Laura knew exactly which one he meant. Their Missouri Pippins and Ben Davis apples were not only marketed around Mansfield, but shipped to big cities.

Today I’ll be imagining Laura in her kitchen, the work center of her life as a farm wife. She might be looking out the window at the duck pond as she kneads the dough for her weekly bread baking. Or maybe it’s her day to churn the butter, pack eggs, or prepare bran mash for the chickens. It’s likely a visitor or two will stop by, who’ll be warmly greeted with a pot of tea, so they can all catch up with local news. Laura might also find a quiet moment in between washing the dishes and cooking Apple Slump in her woodburning stove to pencil another story in her dime store tablet about how her family crossed the Midwest in a covered wagon.

If the way is long
Let your heart be strong
Keep right on round the bend
Though you’re tired and weary
Still journey on to your happy abode
Where all that you love
And are dreaming of
Will be there at the end of the road.

♥ Other Laura recipes at Alphabet Soup:

♥ Interview with Sidney Greenbush, one of the twins who played Carrie in the Little House television series. First featured in 2009, it’s still the most frequently read post on this blog.

♥ Here’s Pa’s fiddle to play us out:  once a year, the fiddle is taken out of its case and played during Wilder Days in September at the LIW Home and Museum in Mansfield. “Sweet By and By,” Pa’s favorite song, was referenced in The Long Winter and played at his funeral.

This post is being linked to Beth Fish Read’s Weekend Cooking, which is open to anyone with a food-related post to share (fiction, nonfiction, movie and cookbook reviews, recipes, musings, quotes, etc.).