In a recent interview at the Teaching Authors blog, April Halprin Wayland referred to Janet Wong as, “a force of nature in the world of children’s poetry.” Forever brimming with ideas, quick to encourage others, and tirelessly evangelizing the reading, writing and sharing of poetry in different forms and formats, Janet is truly beloved by her readers and an ongoing inspiration to her peers.

Often, when reading Janet’s poems, I have to stop for a fist pump, my inner child shouting, “YES!” It’s so good to feel understood, validated and simply human. I love when her humor surprises me, when she takes something small and ordinary and turns it on its side so I can see it from a fresh perspective, and I always appreciate the genuine, authentic voice that proves she really gets it, gets you. 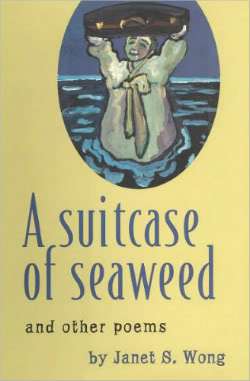 I’ve lived the truth of “Other” countless times. Is it better to feel invisible, or to stick out like a sore thumb, when all you want is to belong and be proud of who you are?  I’m glad this poem is there for anyone who’s ever felt like the odd man out.

I’m happy that Janet chose to share another poem from A Suitcase of Seaweed today, since it’s my personal favorite of her poetry collections. With razor sharp perception, she examines some of the differences between Korean and Chinese customs and holds them up to the American way of life. I laughed at “Rice Cooker” because I did the very same thing, and I could just smell those sheets of seaweed and taste that “Beef Bone Soup.” See why I like this book so much?

For now, though, let’s imagine we all have a Chinese grandmother to bake us these cookies. I loved them as a child, but ours came from a Chinese bakery. Lucky Janet!

Janet:  Recently I asked readers at my Suitcase of Seaweed blog which poems from that collection were their favorites. Overwhelmingly “Grandmother’s Almond Cookies” was the top choice, with several readers writing and posting their own recipe poems. Here is that poem:

No need cookbook, measuring cup.
Stand close. Watch me. No mess up.

One hand sugar, one hand lard
(cut in pieces when still hard),

One hand almond, finely crushed.
Mix it with both hands. No rush.

Put two eggs. Brown in better.
Keep on mixing. Should be wetter.

Sprinkle water in it. Make
cookies round and flat. Now bake

one big sheet at three-seven-five.
When they done, they come alive.

My Chinese grandfather, my GongGong, was the cook in our family. He ruled his restaurant like a general; indeed, he had been a cook in the U.S Army in WWII (stationed in Belgium and France), and once had cooked for a general. GongGong learned his craft from his father, who had been the villagers’ chef for wedding banquets and the red egg and ginger parties of one-month-old babies. My great-grandfather had learned to cook from his father, and so on. Cooking was in their genes.

My Chinese grandmother, my PoPo, was mere sous-chef most of the time to GongGong; she was his assistant, washing and chopping vegetables and marinating meat. The exception: she was the boss of dessert. She was the one who steamed my favorite sweet egg cake, who fried donuts and gin dui sesame balls, who made mango pudding and baked almond cookies. No one could beat PoPo when it came to sweets.

Neither grandparent used measuring cups or followed written recipes. They both belonged to the “handful of this, pinch of that” school of cooking. Both of them insisted that I stand in the kitchen, watching them cook, so I could become a good cook myself one day. (That day hasn’t happened yet. When my son was in third grade and there was a bake sale the next day, he asked: “Mom, can you measure? Other moms measure.” One such other mom actually spit out one of my specialty cookies years later, during a fencing meet; I thought it was such a delicious and original recipe, but she was taken aback by the addition of chili powder to the chocolate chunk cookie dough.)

When A Suitcase of Seaweed was published in 1996, I baked batches of “Grandmother’s Almond Cookies” as gifts for booksellers and other helpful book people. I think they turned out pretty well, even though my hands are larger than my grandmother’s, and my pinches more clumsy. I hope you’ll try her recipe, too. Happy eating!

Award-winning children’s author and poet Janet S. Wong has published over two dozen books for readers ranging in age from toddler to adult. One of the most distinctive things about her body of work is its variety: from picture books about family (THE TRIP BACK HOME, BUZZ) to poetry books about yoga and driving (TWIST and BEHIND THE WHEEL) to chapter books about friendship (ME AND ROLLY MALOO, MINN AND JAKE) to a “Meet the Author” book about writing (BEFORE IT WRIGGLES AWAY).

A self-proclaimed poetry evangelist, Janet is also widely known for her innovative eBooks, which make poetry more accessible and affordable. She’s published eBooks featuring her own poems (ONCE UPON A TIGER: New Beginnings for Endangered Animals, THE DECLARATION OF INTERDEPENDENCE: Poems for an Election Year), as well as several eAnthologies, compiled with children’s literature professor Sylvia Vardell (POETRY TAG TIME, P*TAG, GIFT TAG).

Her many awards and honors include the Claremont Stone Center Recognition of Merit, IRA Celebrate Literacy Award, and a Lee Bennett Hopkins Poetry Honor. She currently serves on the IRA Notable Books for a Global Society award committee.

When Janet Wong is not writing, speaking at teacher conferences, or sharing writing tips with children in schools, she spends most of her time trying to grow blueberries at her home in Princeton, NJ.

♥ Find Janet online at these websites and blogs:

Janet has generously donated a signed copy of A Suitcase of Seaweed for one lucky blog reader. Comment at this post no later than noon (EDT) Saturday, April 28th, for a chance to win. Winner announced on Sunday, April 29th.

**This surprise door prize is in addition to 3 signed copies of The Declaration of Interdependence, which are also being offered as door prizes this week. ☺ 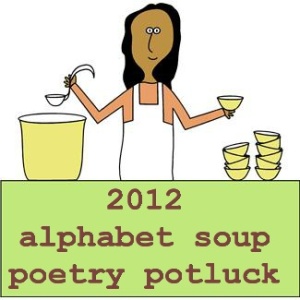 52 thoughts on “janet wong: handful of this, pinch of that”