“So many great souls have passed off the scene. The world has changed. We are now faced with picking up the pieces and trying to put them into shape, document them so the present-day young generation can see what southern food was like. The foundation on which it rested was pure ingredients, open-pollinated seed—planted and replanted for generations—natural fertilizers. We grew the seeds of what we ate, we worked with love and care.” ~ Edna Lewis (“What is Southern?”)

For me, she’s the one. The more I learn about Edna Lewis, the more I love her.

Since today marks the 7th anniversary of her passing at age 89, it’s a good time to celebrate her remarkable achievements as an award-winning chef, cooking teacher, caterer, cookbook author and Grand Dame of Southern Cuisine with a love-in-your-mouth piece of her Warm Gingerbread. Mmmmm-mmmmm!

Miss Lewis, as she was always known, grew up in the small farming community of Freetown, which is located behind the village of Lahore in Orange County, Virginia (about 66 miles from where I live). Her grandfather founded Freetown with two other freed slaves and started the first area school in his living room.

In The Taste of Country Cooking (Knopf, 1976), a classic of Southern cuisine edited by the brilliant Judith Jones (also Julia Child’s editor), Edna shares recipes and reminiscences of the simple, flavorful, uniquely American, Virginia country cooking she grew up with, lovingly describing how they anticipated the select offerings of each season and celebrated special occasions like Christmas and Emancipation Day with full-out feasts.

We are reminded that there’s nothing better than a freshly picked sun-ripened apple, relishing a dish of Spring’s mixed greens (poke leaves, lamb’s-quarters, wild mustard), celebrating Summer’s bounty with deep-dish blackberry pies, apple dumplings, peach cobblers and pound cakes, sitting down to a Fall Emancipation Day dinner of Guinea Fowl Casserole, “the last green beans of the season and a delicious plum tart or newly ripened, fresh, stewed quince.” As Alice Waters says in her introduction, “sheer deliciousness that is only possible when food tastes like what it is, from a particular place, at a particular point in time.”

Edna learned to cook by watching her mother and Aunt Jenny, inheriting the values that would inform the rest of her life — a love of nature, a strong sense of family and community, the deep pleasure of living in harmony with the seasons, pride in family and cultural heritage, the satisfaction of honest hard work and savoring its delicious rewards.

At age 16, after her father died, Edna left Freetown and eventually ended up in New York City, where after working at a few odd jobs, she partnered with antiques dealer John Nicholson, who opened Café Nicholson in the late 40’s. There, Edna was in her full glory as THE cook, quickly gaining a loyal following amongst artsy/bohemian types (Greta Garbo, Gloria Vanderbilt, Marlon Brando, Howard Hughes, Marlene Dietrich) who couldn’t get enough of her cheese soufflés, roast chicken, filet mignon and soon-to-be world famous chocolate soufflé. Ex-pat Southerners like William Faulkner and Truman Capote got the taste of home they so craved; Edna tells of how Truman (whom she called “cute”), often asked for biscuits, and Tennessee Williams, a regular who lived close by, walked her home.

In all, Miss Lewis published four cookbooks, the last co-authored with her dear friend and cooking companion Scott Peacock, who cared for her during the last six years of her life.  She received many awards and honors for her work, including an IACP Lifetime Achievement Award and the James Beard Living Legend Award. She re-defined Southern cuisine and its finer nuances, forever banishing the longheld stereotype that it mainly consists of greasy fried chicken and watery greens.

Southern is a seafood gumbo of crab, okra, tomatoes, scallions, onions, green pepper, bacon, garlic, and herbs. Southern is fresh-made corn fritters, light and crisp enough to fly away. Southern is an okra pancake in a cornmeal batter. Southern is a platter of deviled crabs prepared with soaked slices of white bread torn and mixed with chopped onion, fine-cut scallions, melted butter, fresh-ground black pepper, cayenne, eggs, and the best crabmeat. Baked in the oven, served hot, a morsel to die over. Southern is a pitcher of lemonade, filled with slices of lemon and a big piece of ice from the icehouse, and served with buttermilk cookies. Southern is a delicious chicken salad at a bride’s luncheon.

She is remembered as a strikingly elegant, stylish woman with dangling earrings who designed and made all her own clothes from West African batik fabrics, a soft-spoken woman of quiet dignity who made you want to savor her every word. She became a famous chef at a time when female chefs, let alone African American ones, were few and far between.

She was the first person in her family to vote, took great pride in working for FDR’s first presidential race, and marched with Martin Luther King, Jr. in the Poor People’s March in Washington (1968). She liked Bessie Smith, Jack Daniel’s, and could tell when a cake was done just by listening to it.

And how beautifully she describes the true origins of Southern cooking:

The early cooking of southern food was primarily done by blacks, men and women. In the home, in hotels, in boardinghouses, on boats, on trains, and at the White House. Cooking is hard and demanding. It was then, and it still is now. What began as hard work became creative work. There is something about the South that stimulates creativity in people, be they black or white writers, artists, cooks, builders, or primitives that pass away without knowing they were talented. It is also interesting to note that the South developed the only cuisine in this country. Living in a rural setting is inspiring: Birds, the quiet, flowers, trees, gardens, fields, music, love, sunshine, rain, and the smells of the earth all play a part in the world of creativity. It has nothing to do with reading or writing. Many of those cooks could not read or write.

Now, would you like another piece of her Warm Gingerbread with Sweetened Whipped Cream? 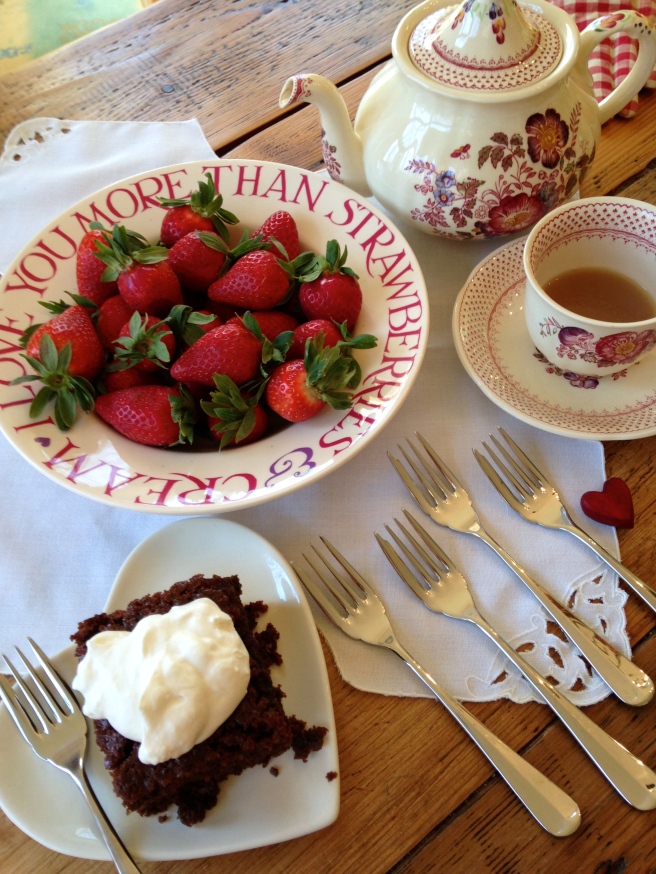 This is the last recipe in The Taste of Country Cooking, part of the “Winter” section. A revised version of it, without the lard, is also included in Lewis’s and Peacock’s The Gift of Southern Cooking (Knopf, 2003), and is called “Dark Molasses Gingerbread Cake with Soft Whipped Cream.”

In The Taste of Country Cooking, many of the recipes call for the now obsolete Royal Baking Powder, with Miss Lewis’s suggestion that you make your own baking powder from “two parts cream of tartar to one part baking soda,” since the chemicals in today’s widely available double acting baking powder (aluminum-sulfate-based) leaves a metallic “tingle” on the tongue.

So I made my own baking powder and replaced the 1/4 cup of lard with butter; I see from the revised recipe that I could have simply used 1/2 cup (1 stick) of butter instead.

As it turns out, the extra butter didn’t hurt one bit! This was easily the best gingerbread I’ve ever tasted. There is no refined sugar in the gingerbread itself, only molasses, and with a full tablespoon of ground ginger along with the cinnamon and cloves, you can just imagine how good the kitchen smelled when this beauty was baking!

We’re talking about a dark, moist, slightly chewy pudding-like gingerbread, so delicious warm with a generous dollop of whipped cream, perhaps even better the next day when all the spices and molasses have had time to “mellow and meld.”

In her headnote, Miss Lewis says, “I remember Mama dipping a teacup into the stone crock of molasses and spooning out the sugary syrup into the pungent ginger batter. Warm gingerbread with fresh, skimmed, heavy cream was an exotic treat after a meal of fresh pork or game on a chilly fall evening.” Hello!

4. Melt the butter (and lard, if used) in the boiling water, then whisk into the floured mixture. Stir well, then add beaten eggs.

6. Spoon the batter into the baking pan and bake for 35 to 40 minutes, or until a skewer inserted in the center comes out clean.

For the Whipped Cream:

Whip the chilled cream until it forms soft peaks but is not too stiff, then add sugar and vanilla. Serve with warm gingerbread.

Sift the ingredients together 3 times, transfer to a clean, tight-sealing jar, and store at room temperature, away from sunlight, for up to 6 weeks. 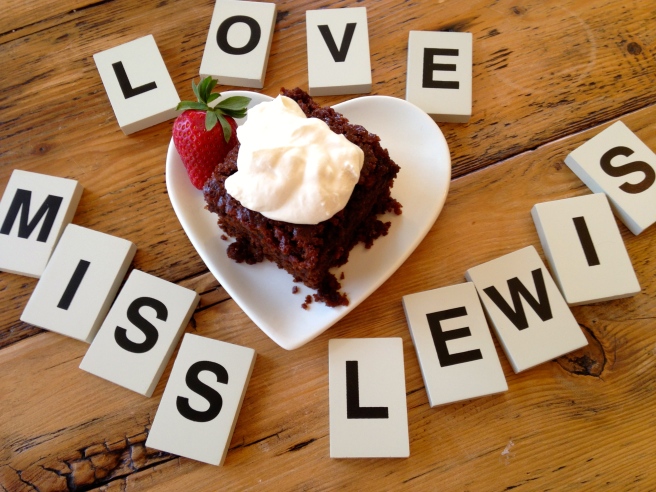 ♥ Enjoy this wonderful award-winning documentary about Miss Lewis, “Fried Chicken and Sweet Potato Pie,” written, produced and directed by Bailey Barash. You’ll get to hear her voice and feel her essence — it’s spiritual, calming and comforting. As so many others have said, she has a great face — a presence — and was truly a luminous individual. You’ll also get to hear from Scott Peacock about their unusual, abiding friendship. Well worth 20 minutes of your time.

♥ I also highly recommend her essay, “What is Southern?”, which I freely quoted from in this post. A beautiful piece of writing!

♥ Check out her cookbooks. Her first, The Edna Lewis Cookbook, is available on the secondary market and is now a collector’s item.

♥ Yes, there is a children’s picture book about Miss Lewis written and illustrated by Robbin Gourley, Bring Me Some Apples and I’ll Make You a Pie (Clarion, 2009), which I reviewed here. 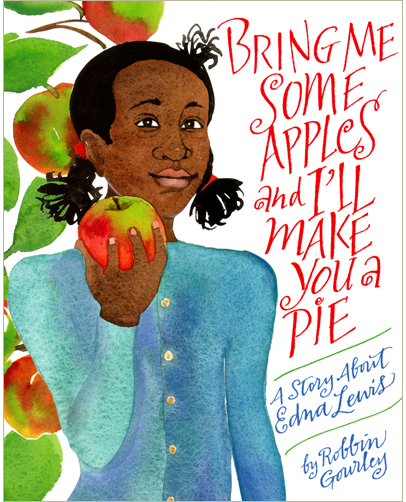 When the weather gets warmer, I hope to visit Lahore and Unionville to see where Miss Lewis grew up and was finally laid to rest.

This post is being linked to Beth Fish Read’s Weekend Cooking, where all are invited to share their food related posts. Put on your best bib and apron, and come join the fun!