Remember back in February when I reviewed Maira Kalman’s latest picture book, Thomas Jefferson: Life, Liberty and the Pursuit of Everything?

Just around then, Maira was scheduled to appear at Monticello and at Politics and Prose in Washington, D.C., and I was all set to travel three hours to Charlottesville just to see her. I’ve adored her work since the early 90’s, and it’s safe to say she’s one of my top three favorite picture book creators ever. Whether she’s chronicling the life of a President or contemplating cake, she speaks to our common humanity like no one else.

But. Her events were cancelled due to inclement weather (bad polar vortex, bad). And then when I had to rush off to Hawai’i at the end of March, I assumed if she was rescheduled I would probably miss her. Oh well.

Friday afternoon, I just happened to stumble upon something in the paper (which I do not read on a regular basis). You know how sometimes you’re scanning stuff with your eyes glazed over, ho-hum, la-di-da, and allofasudden something reaches out and grabs your eyeballs?

Here was the chance I’d waited decades for — to meet the one and only Maira Kalman!  Maira, of the brilliant New York Times illustrated essays. Maira, who illustrated Strunk and White’s The Elements of Style and Michael Pollan’s Food Rules. Maira, who created the Max the Poet stories and Sayonara, Mrs. Kackleman. She of Chicken Soup, Boots, Swami on Rye, The Principles of Uncertainty, And the Pursuit of Happiness, and Hey Willy, See the Pyramids!! She of the fetching layer cakes, cheez doodles, Snicker bars and cherry pie. The person who wrote my favorite alphabet book of all time, What Pete Ate from A-Z (the accordion, the camera, the egg sandwich, the FEZ)!! And Lemony Snicket’s lovably irreverent partner in crime!

*pause while I breathe deeply into a paper bag*

A few minutes after I had purchased some books right outside the auditorium entrance, Maira walked over to sign pre-orders before her talk. What I almost did: die. What I actually did: played it cool. We do not want to scare guest authors with any groupie stalkerish behavior, after all. So I went in and calmly took my seat (can you believe the unprecedented admirable restraint?).

Zooks! For the next 45 minutes I was in la la land.

Her talk was fab fab faboo in every way. It was also charming, random, sophisticated, disarming, hilarious, candid, thought-provoking, and smart. She focused on three nonfiction titles: Fireboat, Looking at Lincoln, and her new Thomas Jefferson book. Such wit! I basked in the refreshingly offbeat, ponderous meanderings of her brilliant mind.

Can’t decide what I loved best: when she professed her total, undying love for Abraham Lincoln, proudly proclaiming that she would have made a better wife than Mary Todd? That she wanted to take a nap on both George Washington’s and Thomas Jefferson’s beds but they wouldn’t let her? That she plans to take a boat cruise this summer a la Lewis & Clark, with an homage to Napoleon (eating as many napoleons as possible along the way)?

Maybe it was when she said that with her it’s either total delight or despair, there’s never any in between. Could have been when she asked the audience for the correct pronunciation of the word “dour.” (She, like me, thought it was “dower,” but someone insisted it was “doer.” I’ve since learned both are acceptable.) BTW, she used “dour” to describe Jefferson, whom she is decidedly not enamored with.

How can you not love someone who called it a good day when she got rid of the giant sausage maker in her living room, or finally gave up her sponges of the world collection? Recently, she was thrilled to win a pair of Toscanini’s trousers at auction, revealing that the title of her memoir will be, “I Won Toscanini’s Trousers” (you heard it here first, folks!).

In that small space of time, for all the years of admiration, for all the ways she changed my thinking and sensibility, for all the possibilities she introduced into my creative psyche, I floated above my seat, grateful and never so thrilled to be anyplace at any time. 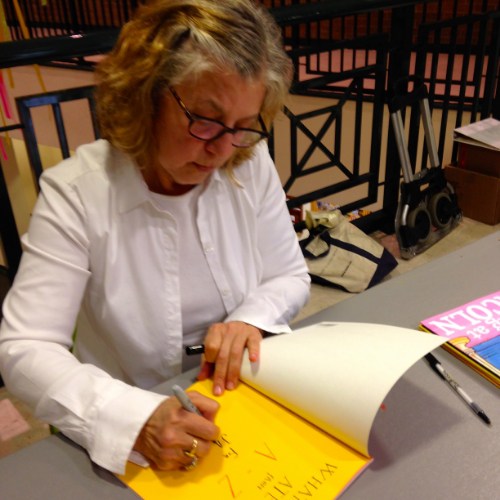 I was third in the booksigning line, my heart pounding. What does one say to an idol? How do I avoid being a blathering idiot? I never thought this moment would ever come, yet there she was, right in front of me, and she was real (I should have brought her some cheez doodles).

Not only was she real, she was normal. And I needn’t have worried, because she put me at ease. It’s true that the most brilliant are also the most humble. They don’t waste time being full of themselves.

We chatted briefly about the surprising fact that the children’s and YA markets are the fastest growing in print publishing today. Why is that, with ebooks cutting into everything else? She drew boots in my Jefferson book, Abe’s stovepipe hat in my Lincoln book, a dog face in What Pete Ate, legs, feet and grass in Girls Standing on Lawns (her newest title with Daniel Handler). Will there be any new Max books, I asked? Likely some re-releases in conjunction with her upcoming exhibit at the Eric Carle Museum (next year?). 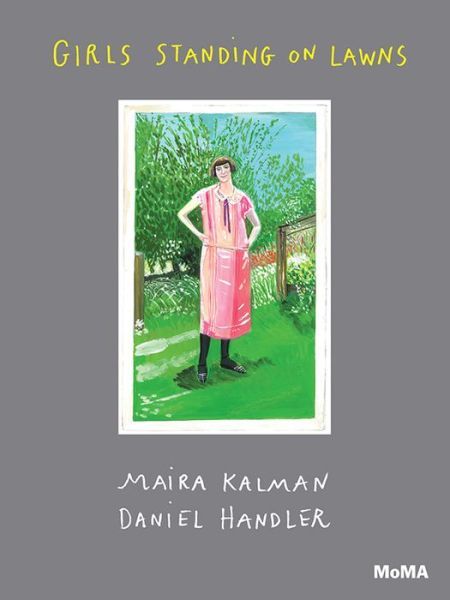 Ah-Ha to Zig-Zag is an alphabet book (!). My Favorite Things features over 50 paintings of select objects from the Cooper-Hewitt Museum and her private collection, with her inimitable reflections and ruminations. When the Cooper-Hewitt reopens in mid November (after several years of renovation), there will be a separate room featuring Maira’s special objects, including the stop watch Lincoln was carrying when he was shot, and naturally, Toscanini’s pants. 🙂

How do you say, now I’ve seen Maira, my life is complete? She writes to the child in the adult, and the adult in the child. Answering an audience member’s question, she said Lemony Snicket was a genius. True, but look who’s talking . . . ♥

Do you have any author/illustrator idols?