It’s no secret we’re more than a little mad for Paddington here at Alphabet Soup.

The resident bears were extremely excited about the new movie (have you seen it yet?) and Michael Bond’s latest novel, Love from Paddington. The lovable bear from Darkest Peru is fast winning new fans on this side of the pond, marmalade sales are booming, and plush Paddingtons are flying off the shelves. Yay! 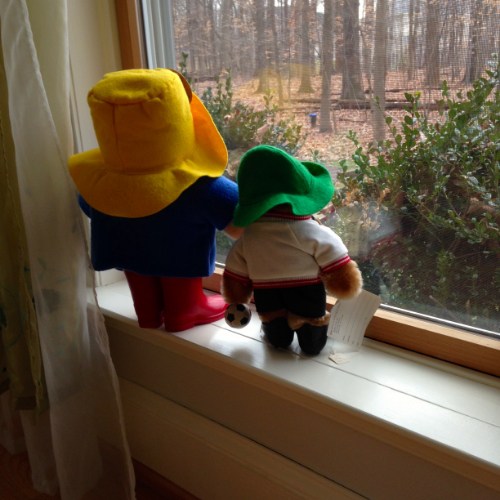 Recently, we happily read about a Paddington Bear who’s been in the same window of a home in Maidstone, Kent (about 35 miles SE of London) since 1970. He was purchased by the Waite family a month after they moved into the house, and has been charming and cheering up passers-by ever since. I can easily imagine myself purposely walking by the Waite house in Sittingbourne Road whenever possible just to catch a glimpse of him. 🙂

Now an adult, Sittingbourne resident Tracey Cooper first saw Paddington when she was six. Through the years he made such an impression on her that she decided to write a poem to thank him and the Waites for the joy they’ve brought to the community. There’s nothing like a beloved bear to warm your heart. 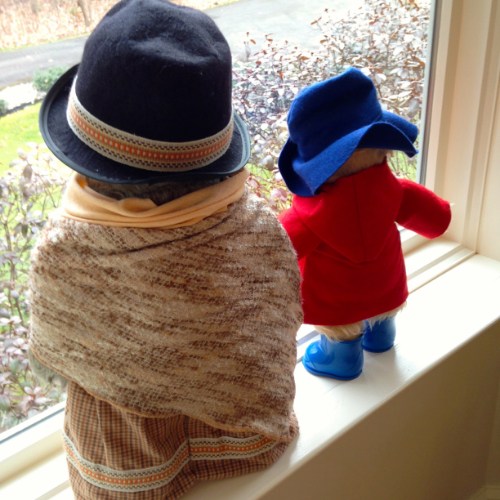 PADDINGTON BEAR — a poem about myself as a child

Bundled into the car again, this girl of six,
Travelling from Lordswood, Chatham (out in the sticks).
Cutting through Boxley and fields stretching wide –
A regular car trip, our “Hospital Ride”.

Turning left at Penenden Heath and heading straight on,
We approach Sittingbourne Road, on the outskirts of Maidstone.
Swinging right at the end, we start to roll down the hill,
Past neat rows of houses with empty window sills.
Then all of a sudden, we look and he’s there-
Standing dutifully in his window, it’s PADDINGTON BEAR!

Dressed in his outfit that is suitable for the day,
Our little furry “weather forecaster” gives up his time to play.
He proudly does his duty with his shoulders pulled back,
Awaiting some eager faces to notice his shorts or plastic Mac.

I can’t help but feel affectionate towards this wee brown bear,
And dread the thought of passing by and finding him not there.
It’s thirty years later, and I am still looking with my Son,
Through a steamed-up car window, (I’m a sentimental mum!)
To find Paddington still standing there, in clothes all shining bright,
Has his jumper now got holes in? Or his Wellingtons feel too tight?
Does he have the same family, with children now all grown?
Is he tied into the deeds so that he will never lose his home?
Has he ever been photographed, his story put to print?
If you find a few minutes would you kindly try to fill me in.

Transferred to Medway Hospital, my trips are more remote,
But I still look out for my old, old friend, with his smile and duffle coat.

I watch for my friends

As I look from this place,

So as you pass by

The bear in the window is so well known, that should the Waites ever move, they’ve decided Paddington should remain at his post. You just never know when someone might need to see his friendly furry face. 🙂

Since one can work up quite an appetite standing on windowsills for hours on end, our resident bears decided to cook up a special treat in honor of their steadfast friend in Maidstone. The bread and butter pudding with marmalade recipe from Paddington’s Cookery Book seemed just the thing — kind of like taking a marmalade sandwich and kicking it up a notch. 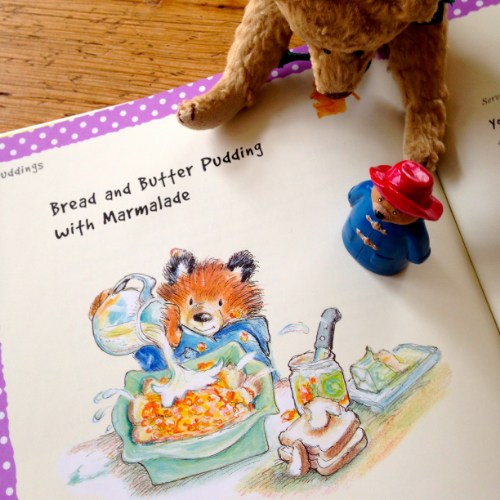 The recipe called for a shallow baking dish (8 x 12 x 12 inches). Well, that must be a typo — I don’t consider 8 or 12 inches shallow by any means. I think they meant 8 x 12 x 2 inches, a size I didn’t have, so I used a 9-inch square glass baking dish. This meant adjusting the quantity of bread to fit. I’m also programmed to use King’s Hawaiian Bread whenever I make bread pudding, so I used about 8 one-inch thick slices of that instead of the white bread specified. (I think you’d be fine using challah or even an Italian loaf, as long as you avoid pre-sliced white bread, which would be too thin.)

The amount of liquid turned out to be just right for the bread pieces I’d placed in my 9″x 9″ dish. I cut back a little on the marmalade (shhh!) to good end. I know Paddington would violently disagree, but too much jam can be cloying for human palates.

So the bread pudding puffed up as it baked, browning nicely quite to the delight of the furry kitchen helpers, but then we had a little problem when it came to taste testing. Who would do the honors?

We know Paddington is unfailingly polite and well-mannered, and like his British friends the Browns, utterly civilized. So we called upon the entire 40-member Paddington contingent and put the question to a vote.

After some spirited discourse, it was unanimously decided that the two newest members of the Paddington family should be the ones to taste the bread pudding. So Movie Paddington (press his tummy and he speaks 5 phrases with a British accent) and Canadian Mountie Paddington (blew in with an Alberta clipper and took up residence here after deciding Canada was too cold) enthusiastically gobbled up some of the pudding with ice cream. 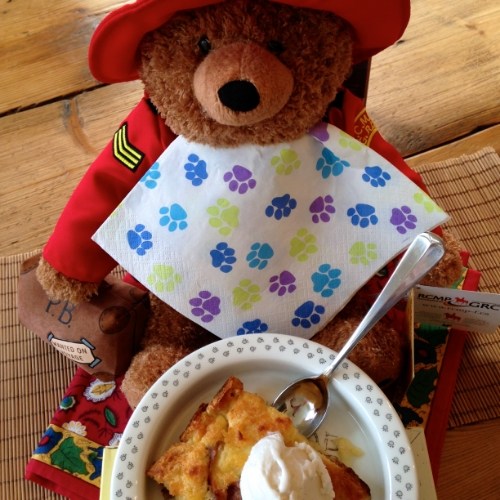 Just two other teensy problems. Since they gave the pudding a resounding 4 paws up, we then had to make ten additional recipes of the bread pudding to satisfy everybeary else. The Alphabet Soup kitchen has never been stickier.

Also, now all 40 Paddingtons are constantly jockeying for prime positions on the front windowsill (they don’t seem to realize that our house is not located on a street with regular foot traffic). But like all good bears, they are patient and willing to wait.

2. Spread 4 slices of the bread with butter, then marmalade, and top with the other 4 slices. Spread some butter on top of each sandwich and cut each one into 4.

3. Lay the squares, buttered side up, slightly overlapping, in a buttered,ovenproof dish.

4. Whisk the eggs, milk, caster sugar and vanilla extract together and pour over the dish. Let it stand for about half an hour, to allow the mixture to soak in.

5. Sprinkle the demerara sugar over the surface.

6. Bake for about 45 minutes, until it is puffed up and the top is golden.

7. Serve with cream or ice cream.

* Adjust quantity of bread depending on the size of your baking dish.

** If you don’t have any caster sugar on hand, make your own “superfine” sugar by grinding granulated sugar in a food processor for a minute or so. I just used plain granulated sugar (no grinding).

*** I used light brown sugar instead of demerara.

Paul at These 4 Corners is hosting the Roundup today. Drop by, give him a friendly growl and a bite of bread pudding, then check out the full menu of poetic goodness being served up in the blogosphere this week. Have a good weekend!

P.S. Click here to read about a woman who is even more obsessed with Paddington than I am (I covet her beautiful collection of British-made Gabrielle Design bears). 🙂 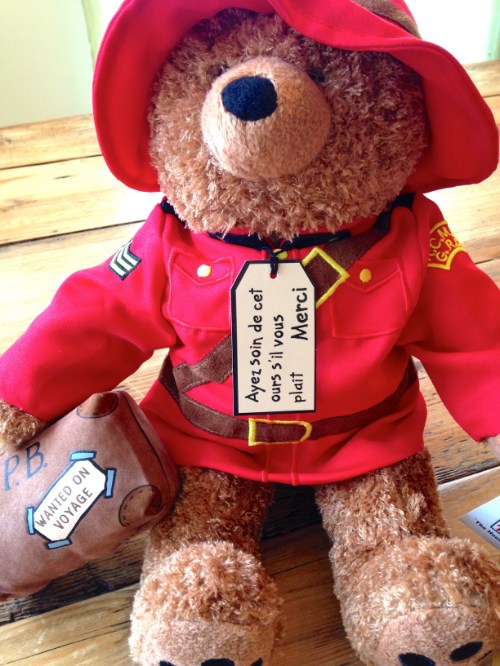 This is post is also being linked to Beth Fish Read’s Weekend Cooking, where all are invited to share their food-related posts. Put on your aprons and best bibs and come join the fun!

59 thoughts on “friday feast: the bear in the window and paddington’s bread and butter pudding with marmalade”