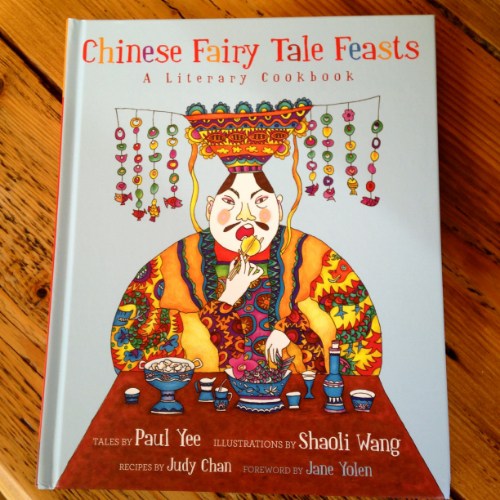 Imagine a sumptuous Chinese banquet with thirteen enchanting fairy tales on the menu — centuries-old stories of gods, ghosts, noblemen, monks, peasants, farmers, and merchants all motivated by some aspect of food — having or not having it, growing, cooking, relishing, transforming it.

Each tale is served alongside a tempting recipe and lovingly flavored with gorgeous folkloric illustrations (a visual feast in itself), making this literary banquet something to savor with family and friends across generations time and again.

Chinese Fairy Tale Feasts: A Literary Cookbook (Crocodile Books, 2014), is a delightful trifecta of tales by master storyteller and award-winning Canadian author Paul Yee, mouthwatering recipes by Judy Chan, and charming illustrations by Shaoli Wang. While this book is perfect for celebrating the Lunar New Year this week, it’s equally satisfying any time you wish to nourish the mind, heart, body, and spirit.

This is the third in the literary cookbook series following Fairy Tale Feasts (2009) and Jewish Fairy Tale Feasts (2013) by Jane Yolen and Heidi Stemple, books that have my name written all over them, as they explore and illuminate the fascinating connections between stories and food. As Jane Yolen says in her Foreword for Chinese Fairy Tale Feasts, the ability to make things up, to tell stories, distinguishes us from other animals:

And the connection between food and stories is profound and clear. Both are infinitely changeable, suiting the needs of the maker and the consumer.

While most of the tales were adapted and retold from original sources, Yee also contributed three original stories based on traditional fairytale/folktale themes and motifs. It just so happens that my favorite story in the book is a Yee original, “Stretch and Fold, Stretch and Fold,” which is about the origin of noodles. 🙂

I also especially liked “Third Lady of Plank Bridge” (remind me not to eat any buckwheat cakes lest I turn into a donkey) :), and “The Hall of Contented Cravings,” where a chef is charged with cooking seemingly impossible dishes to please the King (“cook a dish that contains the sky”). The chef’s poetic response (“Sky Blue White Clouds”) reminds us that cooking is a transcendent art form (“cloud ears, mushrooms as blue as the sky, and the wings of high-flying birds”).

I also love how Yee has included notes and Chinese proverbs with each story for fascinating historical and cultural context. Some are culinary notes (Chinese bread, rice, watercress), while others cite the tale’s “Old Story Pattern” or prevailing literary motif (the quest, cautionary tale), or its connection to Buddhism or Taoism. There are also tasty tidbits about story origins (a famous novel, an opera) as well as other general insights into Chinese culture (significance of mountains and fish).

I like the dynamic process of the storyteller’s art, seeing how Yee has incorporated unique knowledge and personal style to create something new from the ancient. It’s exciting to know that as readers and listeners we can be active participants, making the stories our own as we in turn pass them on. Universal themes such as greed, generosity, atonement, empathy, hunger and poverty, as well as elements of adventure, humor, suspense, magic and wonder will satisfy a variety of palates and certainly whet the appetite for the accompanying recipes, which adults and children will enjoy making together. 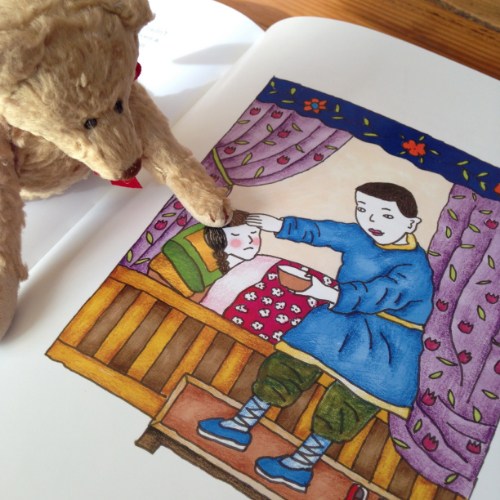 Like the folktales, these recipes are open to tweaking, adapting, experimenting — therein lies the real fun. Of course what best flavors these dishes are their connections to the stories themselves, an intangible ingredient ensuring a lasting, satisfying meal.

Shaoli Wang’s engaging and informative illustrations add charm, authenticity and richness, transporting us through time and space with interesting, colorful details of settings, customs and village life. I love the full page spreads of tables laden with platters of steamed fish, dumplings, stir fried vegetables and noodles, as well as all the wonderful spot art adorning the recipe pages. She actually had me at the adorable endpapers (wouldn’t you love to see this pattern on table linens?). 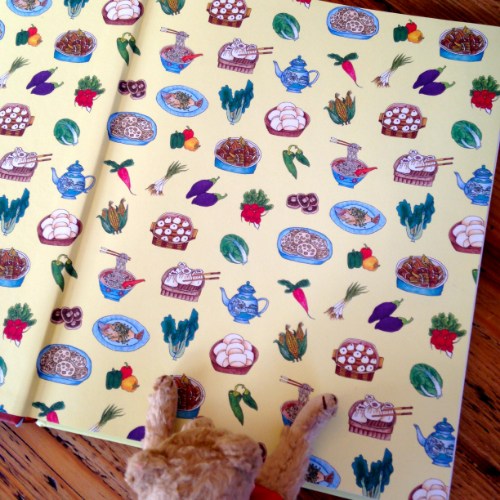 “Banquet of Waste” is the first folktale in the book and it’s paired with a recipe for Congee (Rice Porridge). The story itself features one of the book’s prevailing themes: practicing generosity/feeding the poor.

Iron Crutch, Patron God of the Poor, once approached the home of mean-spirited merchant Boss Kuang in the guise of an old lame beggar dressed in smelly rags and surrounded by flies. When he knocks at the back door, Boss Kuang’s tender hearted daughter Mo-jun answers and grants Iron Crutch’s request for food.

But later when Boss Kuang hosts a grand banquet to celebrate his 60th birthday, having used uncooked rice for road repair and spreading a thick layer of it under the carpet by the front door for guests, he dismisses Mo-jun’s pleas to stop wasting food and refuses to share a single grain with Iron Crutch, threatening to beat him and have him arrested for stealing. When Iron Crutch takes a few grains from under the carpet, Boss Kuang summons the Judge, who decides in favor of Boss Kuang.

Meanwhile, the grand banquet is a disaster. Clouds of flies emerge from the uncovered dishes, and all the guests flee in disgust. Boss Kuang blames Iron Crutch, hitting him over the head with a bamboo pole, rendering him unconscious and sending the soul from his body, which becomes so heavy even five men cannot lift it. When the Judge arrives, he finds a note tucked in Iron Clutch’s rags chastising Boss Kuang and all those who would refuse to feed the poor. After Iron Crutch summons his soul back to his body, a repentant Boss Kuang realizes he has insulted the Gods, and subsequently invites all the village beggars to the feast, where not a single fly appears. 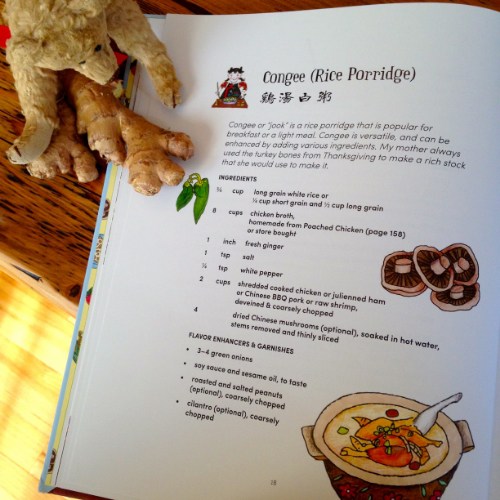 I enjoyed making the Rice Porridge — simple, basic comfort food for a cold winter’s day, and one of my Dad’s favorites (he loved the pork organ-loaded version, “Cup Dai Jook,” from a local restaurant). No pig’s guts for me, thank you, I was happy to follow Judy’s suggestion for adding cooked chicken and green onions.

I was happy to learn from this blog post that RICE is Paul Yee’s favorite Chinese food:

The smell of steaming rice instantly transports me to my childhood, when a blackened pot sat on a wood-burning stove and bubbled directly over the flames . . . On New Year’s Eve, the rice pot wasn’t washed. The rice crust was left overnight. Next morning, the pot would already contain rice to mark an auspicious start to the year.

Love that! Congee makes a good breakfast or light meal, and of course is extremely versatile. You are only limited by your imagination as to what other meats or vegetables you may wish to add. Using a chicken or turkey carcass to make homemade stock is great, but you can also use store-bought chicken broth.

From now on, whenever I eat rice in any form, I will think of all those grains of rice under Boss Kuang’s carpets, remember Iron Crutch’s wise words, and know that it’s good to leave some rice in the pot to welcome the New Year. 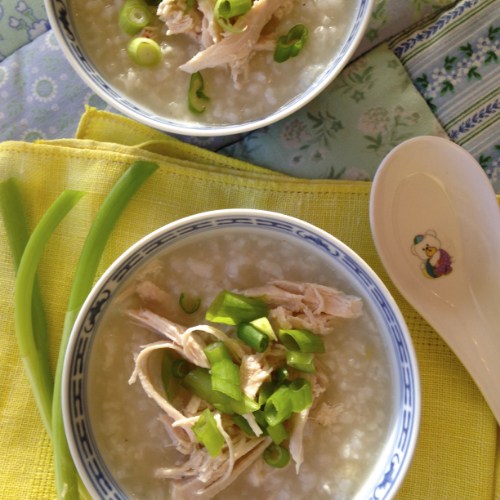 1. In the sieve, rinse rice under cold water to remove excess starch. Shake out water.

2. In the heavy bottomed pot, bring the rice and chicken broth to a boil.

3. Meanwhile, scrape the skin off the ginger with a teaspoon, cut into 3 pieces and smash against cutting board with the blade of a knife. Add the ginger, salt and white pepper to the rice and broth mixture. When at a full boil, reduce heat to medium low and simmer, stirring occasionally with a wooden spoon. Simmer for about 1 hour or until the rice thickens into a porridge-like consistency.

4. While the congee is cooking, wash the green onions. Cut off the root ends and thinly slice on a diagonal from the white end to half way up the green part. Discard the upper green part to avoid any bitterness. Set aside.

5. If using shrimp, add to congee and simmer until opaque and cooked. If using Chinese mushrooms, simmer in congee until tender. If adding cooked meats, heat until hot.

The publisher has generously offered a brand new copy of Chinese Fairy Tale Feasts for one lucky Alphabet Soup reader. For a chance to win, simply leave a comment at this post telling us what your favorite Chinese dish is no later than midnight (EST) Sunday, February 22, 2015. Giveaway open to U.S. residents only, please. Good Luck!