A Poem in Your Pocket by Margaret McNamara and G. Brian Karas (Schwartz & Wade, 2015) is the perfect Poetry Month book, as it will get kids excited about writing their own poems and reading them aloud. The story centers around Elinor, a conscientious model student who struggles with a major case of writer’s block when she tries too hard to write the perfect poem.

In this third book in the series about Mr. Tiffin’s class, Elinor and her classmates are very excited that Emmy Crane, “a great American poet,” will be visiting their school on Poem in Your Pocket Day. The plan is to learn as much as they can about poetry by reading and memorizing poems, and by writing poems in their journals. They will then select one of their poems to put in their pockets, which they will read aloud at the school assembly for Ms. Crane.

Supremely confident, somewhat braggy Elinor plans to wear jeans with six pockets when Ms. Crane comes, with an original poem stashed in each one. She dives right into studying everything and anything about poetry a full month ahead of the class. When April rolls around, Mr. Tiffin teaches them about figures of speech (similes, metaphors), and different poetic forms (haiku, acrostic, concrete). Everyone has fun reading sample poems and writing their own, while strangely silent Elinor has nothing to share, reassuring the others that she will come up with something amazing for Ms. Crane’s visit. 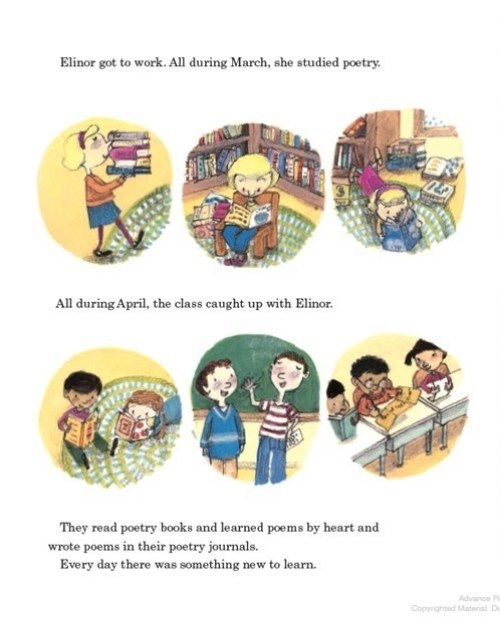 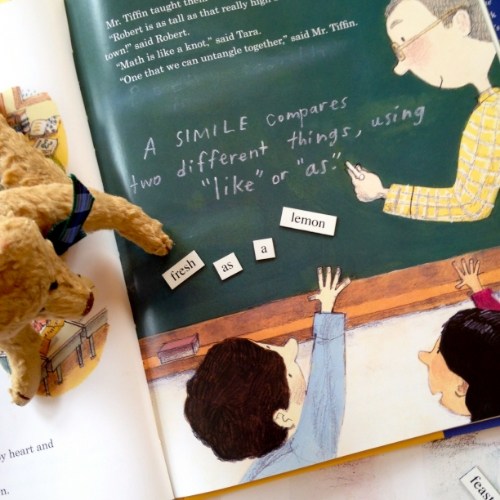 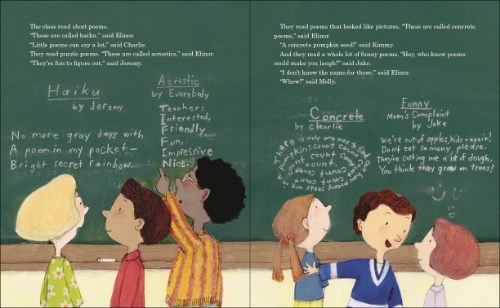 Mr. Tiffin takes the class outdoors so they can practice using their “poet’s eyes.” Another day, he gives them each a brown paper bag and asks them to write a poem about what’s inside. Everyone is eager to read their poems aloud for the others to guess, but Elinor’s journal remains blank.

The weekend before Ms. Crane’s visit, Elinor’s struggle with perfectionism intensifies as she writes draft after draft of haiku, brown bag poems, rhyming poems — only to throw them all away. Nothing is ever good enough. She just can’t find the perfect words for her perfect poem. On the day of Ms. Crane’s visit, she wears a dress with only one small pocket and nothing inside.

At school, excitement is at fever pitch. The halls are decorated with all kinds and sizes of pockets containing poems, and of course all the other students are carrying poems in their pockets. Elinor makes a last ditch effort to write her poem during the course of the day to no avail.

At the assembly, Ms. Crane reads some of her poems and answers student questions. Soon it’s time for Elinor’s classmates to go up on the stage to read their poems. Mr. Tiffin tells Elinor she doesn’t have to go up if she doesn’t want to, but Elinor doesn’t want to disappoint Ms. Crane. She tells the famous poet how hard she tried to write the perfect poem. Kind Ms. Crane tells Elinor that “No poem is perfect,” then asks her to close her eyes and tell her about the poems she wanted to write.

Thinking about the poems she had studied, remembering what she saw outside with her poet’s eyes, and describing the object in her brown bag, Elinor finally finds her voice as she shares the poem in the pocket of her mind. Ms. Crane assures her that these “words from the heart” are where poetry begins.

This touching, sensitively told story will resonate with anyone who’s ever wrestled with perfectionism and how it impedes creativity. Not only is this a wonderful introduction to the basic elements of poetry, it also reinforces the idea that a poem should begin with a feeling, and that a poet should trust rather than judge it.

Both Mr. Tiffin and Ms. Crane exhibit empathy, kindness and understanding, all crucial to an ideal learning dynamic. Lively class discussions are fun to read, as the students eagerly embrace new information and happily share their work. I like how Mr. Tiffin never talks down to Elinor, instead providing gentle guidance and reassurance so she can try to resolve the problem on her own.

Karas’s gouache, acrylic and pencil illustrations of the school setting with its diverse group of busy, energetic students are warm, amiable and inviting. I think most readers will feel right at home in Mr. Tiffin’s classroom. Spot-on facial expressions and posturing trace Elinor’s gradual loss of confidence and ever growing despair.

When you see Elinor in her single pocket black dress on the day of the author visit looking so forlornly in the mirror, and then standing on the stage with her head bowed beside Ms. Crane, you can’t help but feel for her. And when she finally realizes that what she had been thinking about all along was good enough, oh, the joy and relief on her smiling face!

After reading this story, kids will never think of pockets the same way again. The words of a poem, like any other treasure we may choose to carry with us, suggest a specific time, place, feeling or memory. And isn’t it gratifying to know we all have poems in the pockets of our minds? Such a good book. 🙂

Mr. Cornelius liked this book so much he had to tell his friend Max all about it. Max was a poet, after all, and Cornelius knew he had a lot of pockets.

So what was in them? List poems of Max’s favorite things. 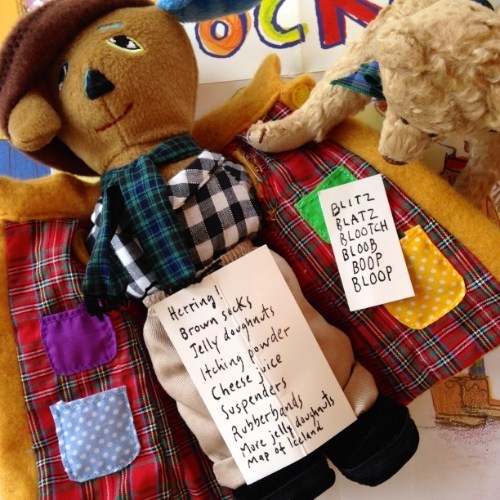 Cornelius had a lot of favorite things too, but he didn’t have a coat like Max’s. All he had was rumpled fur. He felt sad and so, so — pocketless.

But thinking about Poem in Your Pocket Day cheered him up. He could write down some of his favorite food poems and give them to all his friends with pockets. Then when April 30 rolled around, they could feast on his poems for breakfast, lunch or dinner and pass the poems on to their friends.

He tucked a poem into Chef Paddington’s apron.

Chef Andre and Albert were happy to get theirs.

Corduroy didn’t have a pocket, but Cornelius gave him a poem anyway. Something told him he’d be getting a pocket soon. 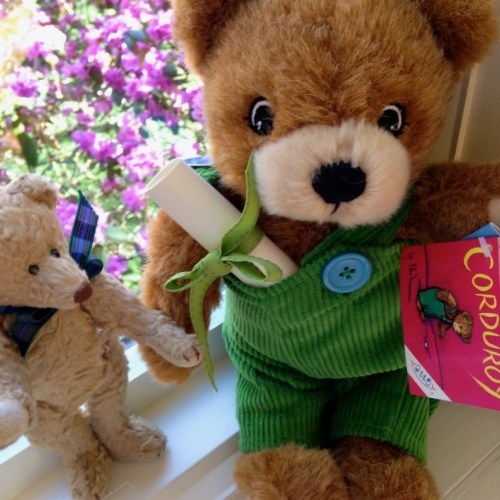 Of course he had to give Big Screen Paddington a couple of poems (both about marmalade).

The Easter Bunny didn’t have a pocket, just an empty basket. Cornelius gave him a poem about eggs. 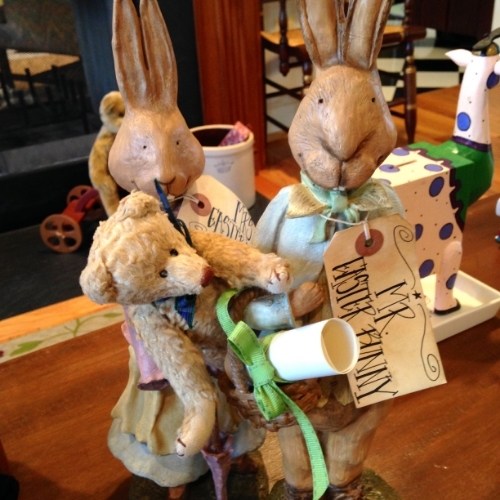 as did the English Bobby, who had 4 pockets. He promised to read his poems to 4 pickpockets. 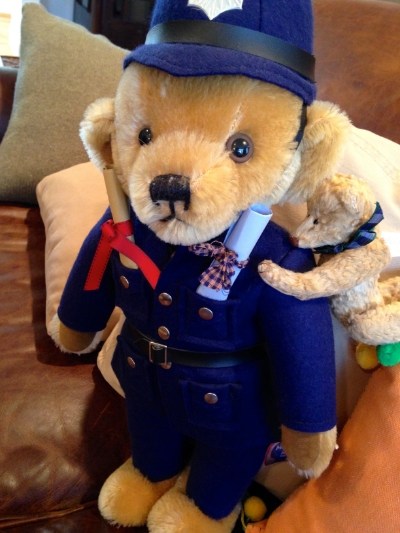 Finally, he gave Raggedy Ann three poems, because she is very big.

There, now everyone would be ready for Poem in Your Pocket Day!

But something still didn’t feel right. Cornelius didn’t have a pocket of his own. Where would he put his favorite poem?

He thought about what Emmy Crane had said to Elinor. What did he feel strongly about? Food, food, food. 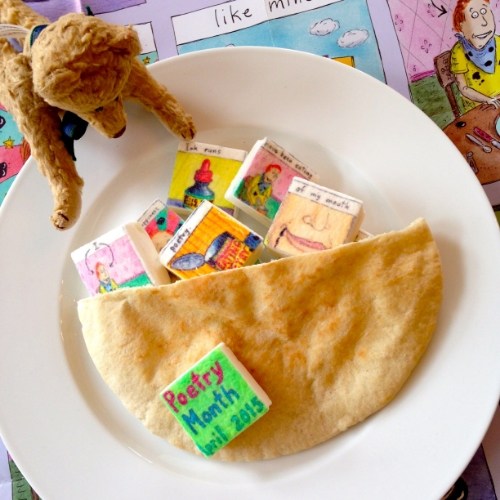 And then he thought, I am a poem! Call me Bear-ku!

And my other friends are poems!

He could hardly wait for April 30.

What’s in your pocket?

♥ Click here for a downloadable poster and Activity Guide

The talented and immensely creative Robyn Hood Black is hosting today’s Roundup at Life on the Deckle Edge. Scamper over there — she might have an Oatmeal Jama Bar in her apron pocket. 🙂 Enjoy the full menu of poetic goodness being shared in the blogosphere this week!

*Interior spreads from A Poem in Your Pocket posted by permission of the publisher, text copyright © 2015 Margaret McNamara, illustrations © 2015 G. Brian Karas, published by Schwartz & Wade Books. All rights reserved.

47 thoughts on “friday feast: A Poem in Your Pocket by Margaret McNamara and G. Brian Karas (+ “Mr. Cornelius Picks a Pocket”)”