Today I’m doubly pleased to welcome poet and author Nancy Tupper Ling, who’s here to tell us all about her new book Double Happiness (Chronicle Books, 2015), a heartwarming story about a family moving from San Francisco to the East Coast.

Beautifully told through a series of lyrical poems in the alternating voices of Gracie and her little brother Jake, Double Happiness deftly captures the mixed emotions of leaving loved ones behind, traveling across country, and seeing one’s new home and surroundings for the first time.

It is especially hard saying goodbye to Nai Nai (Grandmother), Auntie Su and Uncle Woo. To help ease the transition, Nai Nai gives each of the children a special box, suggesting they fill it with four treasures “leading from this home to your new.” She explains that when she was young she had her own “happiness box,” which enabled her to keep special memories close. 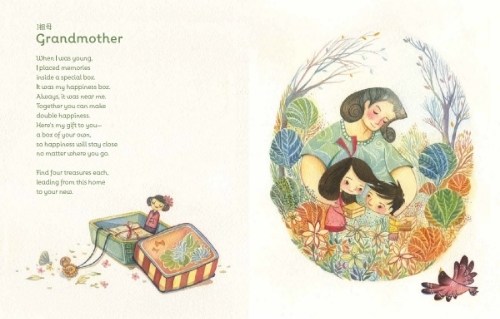 Jake is as much excited, adventurous, and playful as Gracie is apprehensive, reflective, and sad. The treasures they add to their boxes (panda, marble, lucky penny, leaf, snake) mark specific moments in their journey with attendant feelings and impressions.

In Chinese tradition, “double happiness” is usually associated with weddings, but Nancy’s story artfully extends the concept: two homes, two coasts, two cultures, two boxes, the old and the new, two children, a dragon and a phoenix, two halves of a perfect whole coming full circle in the blessed harmony of family.

I know you’ll enjoy learning more about how and why Nancy wrote this book. And yes, she’s sharing a favorite recipe! Enjoy!

What sparked the idea for this story about a family moving from the west coast to the east coast?

That’s a long and windy story in itself. Initially I didn’t write a story about a move. Surprise, surprise! That’s what revision does to us, right? Lots of revision (see photo of my Double Happiness binder). At first the manuscript was called The Double Happiness Box, and it was about two siblings (Gracie and Jake) who were stuck at home on a rainy day. They were bored and their dad was busy trying to fix a leak in the ceiling. To keep them occupied, he tells them to discover treasures around the house and put them in their “double happiness” boxes.

Several editors felt drawn to the story, but they commented that it needed “more movement or action.” So I thought “Maybe these editors are onto something, Why not include a REAL move?” That was the turning point. To add to that, my in-laws live in San Francisco (Golden Gate, Eucalyptus trees, Muni trains). When my children were younger, they had a hard time their leaving family on one coast to return home to the other, so far away. That same sentiment is the inspiration for Double Happiness.

Why did you decide to tell this story in a series of poems rather than in prose? What was the most challenging part of doing that?

Often my ideas for children’s stories begin as poems. Weird, I know! Not surprisingly, the idea for Double Happiness started the same way, with a poem about a rainy day and extremely bored children.

Before becoming a children’s author, I was a poet. That’s strange for me to say now because when I was young I swore I would never become a poet like my mother, Jean Tupper. Poetry was “Mom’s thing;” short stories were mine. Whoops! Never say never. My Senior year of high school, I won the Haggis Baggis Poetry Prize (don’t ask) and that was the beginning of my new love. My mom helped me to become a better poet.

All that’s to say, in my mind I see a picture book as poem with a plot. I tend to write lyrically first, which causes problems in the plot department. So keeping the story line moving through each poem was tricky. Along the way, Double Happiness was rejected by several publishers because the book would be too hard to illustrate. Thankfully my editor, Tamra Tuller, at Chronicle Books thought outside of the box (pun intended). 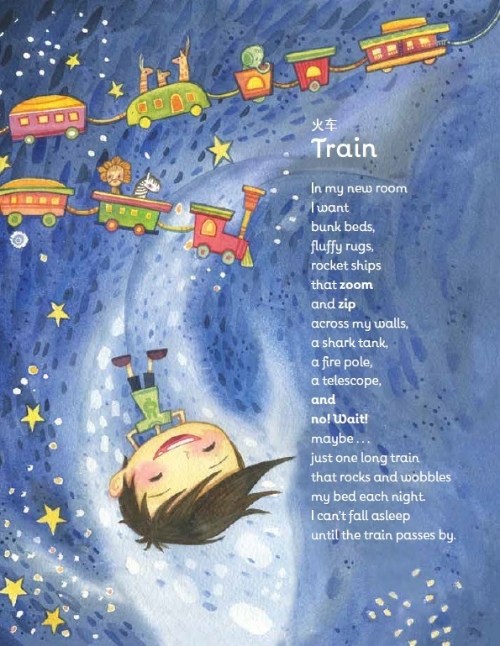 I love how the characters’ personalities come through so vividly in the poems. Are Gracie and Jake based on real people?

They are like the yin and yang of Chinese tradition—opposites that make a whole. My own girls are very similar to Gracie and Jake. I have one who finds change difficult (like Gracie) and one who is willing to take on any adventure (like Jake). I tend to lean toward Gracie’s personality myself. I would be very sentimental about what I was leaving behind. 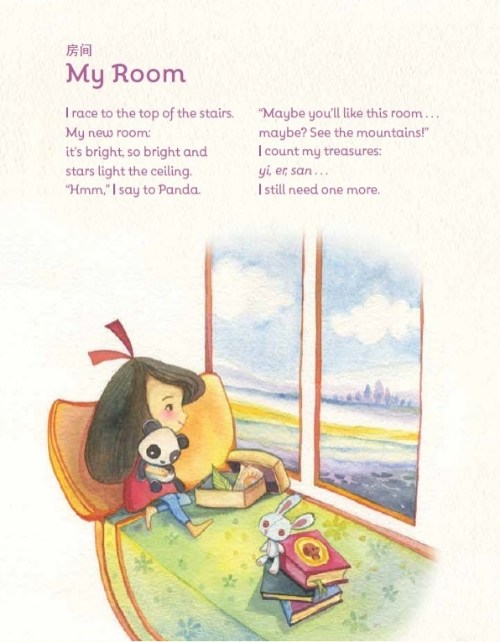 Where did the idea for the happiness boxes come from? Do you keep any special objects on or near your writing desk for inspiration?

Double happiness boxes are often given as favors at Chinese-American weddings to symbolize the joy of this special occasion. Usually they include images of the phoenix and dragon, for power and wisdom. I liked the idea of children gathering treasures in these happy boxes. The grandmother (Nai Nai) in Double Happiness is based on my husband’s grandmother, who hid her favorite treasures in a box during World War II. After I had written and revised my story, I happened into an antique shop in Ipswich, Massachusetts. When I rounded the corner, there was a black box with the phoenix and dragon etched on the top. I bought it—after all, writers need a bit of hope through all the rejection. These objects definitely inspired me and kept me going.

There are 24 poems in this book. How many poems did you actually write for this project? Please share a poem that didn’t make the cut and explain why.

Because the story was so different originally, the poems were different as well. One of the original treasures that Gracie found around her home was a leih sih, a Chinese red envelope filled with money, which Gracie received on her birthday. That didn’t make it into the final version. And that reminds me, originally the Chinese words were Cantonese, but I made the decision to switch to Mandarin because it’s more universal.

Also, the poem that began it all was called Rain:

Jake and I roll

our bodies inside rugs—

our tips and fingers

there’s nothing left to do.

Do you have any tips for those wanting to write stories-in-verse?

It sure helps to study poetry and read poetry and write poetry. I know, that probably sounds a little snarky. I have a lot to learn too, but I get frustrated when authors decide to write a story-in-verse because it’s the “thing to do.” Yet they’ve never written a poem before   DON’T DO IT PEOPLE! (Smiley face goes here, to ease the tension). It’s not easy. I have to remind myself not to shirk the poetry for the plot. The story needs to move forward but each line of poetry is important, too. A poet actually thinks about end-stops and enjambments, whether there’s a pause or push at the end of each line. Some of my favorite authors who are masters of stories-in-verse are Karen Hesse, Sharon Creech, and Nikki Grimes.

Can you give us an idea of what your poetry school visits are like?

Fun, I hope! I love visiting one classroom at a time and creating poetry with the students. To have those personal interactions are great (like when the kid tells you his dog ate his best poem). Usually I’ll read from one of my books first, ask a few questions related to the story and then work on a group poem that they can keep after I leave.

What do you like best about Alina Chau’s illustrations? Do you have a favorite?

Alina is genius! There’s a lot packed into each poem, and yet Alina’s illustrations capture the essence of each poem. One of my favorite pieces is the “Goodbye” page. Using soft colors and traditional and simplified Chinese characters, Alina portrays this bittersweet scene beautifully for the reader. Sigh! An author can’t ask for anything more!

I love the poem “Dinner” (no surprise). 🙂 Who does most of the cooking in your house, and could you please share a favorite Chinese recipe with us?

Yum! Yes, let’s talk food. My husband is a more intuitive cook, but I’ve learned so much from him. I can make a pretty mean stir-fry and noodle pancake now. That said, I’m the one who makes most of the dinners in our home (moan-groan) because he’s the last to get home at night. We get hungry. This means my girls have grown up with homemade mac ‘n cheese as well as beef lo mein.

My husband never uses measurements for his cooking, but here’s our attempt to put a Black Bean Salmon recipe together for everyone to try:

Crush and mass ingredients from black beans through the oil. Slather the mixture on top of the salmon filets. We don’t have a steamer, so we use a roasting pan. We fill the pan with an inch of water, then place the salmon on a deep, heat-resistant plate which rests on top of two ramekins. Cover and allow to the fish to steam for 20 minutes. Voila!

Thanks so much, Nancy! 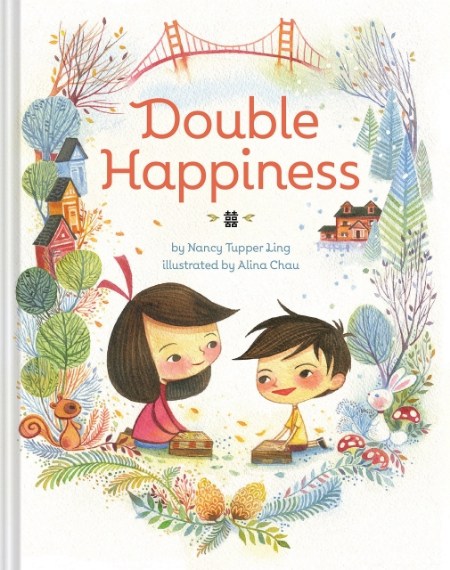 For a chance to win a brand new copy of DOUBLE HAPPINESS, please leave a comment at this post telling us what your favorite Chinese dish is no later than midnight (EDT) Wednesday, September 9, 2015. You may also enter by sending an email with “HAPPINESS” in the subject line to: readermail (at) jamakimrattigan (dot) com. Giveaway open to U.S. residents only, please. Winner will be announced September 18. Good Luck!

Please send your snail mail address so we can get the book out to you pronto :).

Thanks, Everyone, for entering. Loved hearing about your favorite Beatles songs.

La La Lovely Linda Baie is hosting the Roundup at TeacherDance. Take her some dim sum and check out the full menu of poetic goodies on today’s menu. Have a fabulous Labor Day Weekend!

61 thoughts on “Chatting with Nancy Tupper Ling about Double Happiness (+ a giveaway!)”