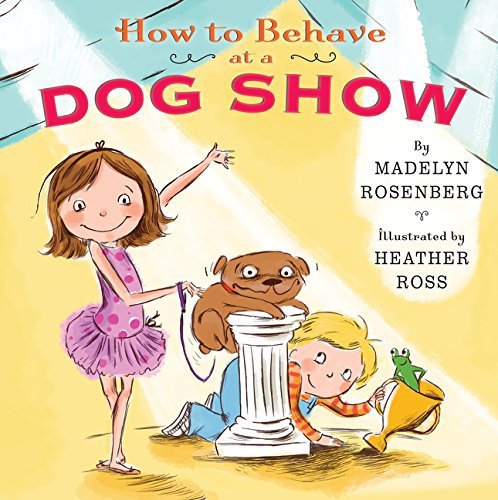 1. Virginia author Madelyn Rosenberg has two new books out! Remember when we featured How to Behave at a Tea Party (Katherine Tegen Books, 2014), a picture book about bossy Julia wanting everything just-so, while her younger brother Charles and his friends have different ideas? Well, Julia and Charles are back in How to Behave at a Dog Show!

Is Rexie cut out to be Best in Show? Probably not. Does Julia enter him in the Happy Tails Best of Breed Dog Show anyway? She sure does. This companion to How to Behave at a Tea Party offers readers more laugh-out-loud silly fun with sister-brother duo Julia and Charles and their lovably mischievous dog, Rexie.

With subtle themes of losing gracefully and celebrating the things that make each of us winners in our own ways, this book is perfect for preschool and early elementary children, for readers who enjoyed the How to Babysit a Grandpa series, and for anyone who has ever loved a less-than-perfect pet.

Julia and Charles end up hosting a pet show of their own—don’t be surprised if young readers are inspired to do the same!

Ruff ruff! Sit up and beg for this funny tail, which is again illustrated by Heather Ross. 🙂 Check out this cute trailer:

AND, Nanny X fans will be happy to know she’s back in Nanny X Returns (Holiday House, 2015):

Something fishy is up and Nanny X, an agent for Nanny Action Patrol, and her young charges plan to investigate in this sequel to NANNY X, which was called “a fun and funny blend of Spy Kids and Mary Poppins” by Kirkus Reviews.

In their second adventure, eleven-year-old Ali, eight-year-old Jake and baby Eliza go fishing with Nanny X, only there is something odd about their catch, it’s robotic! While the gang wonders about this strange occurrence, a robotic squirrel shows up and tries to steal Nanny X’s computer, which is disguised as a box of baby wipes. Meanwhile, a mysterious person known as The Angler is threatening the nation’s treasures if the President doesn’t install a statue of a fish on the White House lawn. Nanny X wonders if these weird incidents are connected, and a series of investigations surrounding a jealous artist yields non-stop action and humor.

Be sure to check out both Nanny X chapter books, written especially for ages 7-10!

2. Some of you may have noticed I have a thing for footed china. There’s just something about a cup, salt shaker or plate strolling across the table that I find irresistible. Most of my pieces wear shoes and were made by Carlton Ware back in the 70’s and early 80’s. I first began collecting them when I lived in London and they were quite affordable on a teacher’s salary.

Now that Carlton Ware is no longer making their Walking Ware line, I must look elsewhere to satisfy my foot cravings. Recently discovered these bare footed cuties by Dylan Kendall. Dylan describes herself as a self-taught ceramist by day, bartender by night, and foster grandmother to homeless youth.

She has quite a varied history, but the bottom line is her belief in compassionate homes, unbounded creativity, sustainable products, social responsibility, joy and laughter. Who can’t help but smile at her dishes and mugs, most with human feet, some with cat and dog feet? Yes, the family table should be a happy place. You can find her pieces at her website or Etsy shop. 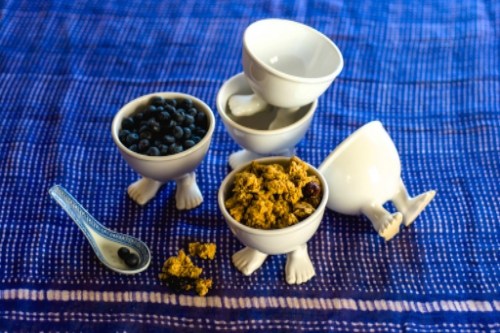 3. I’m still thinking about the Pope’s visit to the U.S. last month, how people of all denominations love him, how much we need a beacon of hope, love and peace in our very troubled world. We saw him at airports, speaking to Congress and members of the United Nations, interacting with children, riding in the Pope-mobile waving to thousands upon thousands of people. But did you ever wonder what the Pope was eating to help him sustain his grueling schedule?

We do know that while in New York, none other than Lidia Bastianich (Felidia) and Angelo Vivolo (Vivolo) provided several meals for the Pope and his 14-person entourage. In this video interview, Lidia cites the Pope’s preference for light and simple foods. While sitting in the kitchen planning the dinner menu, Lidia, Angelo and fellow chefs Fortunato Nicotra and William Gallagher were surprised when Pope Francis asked to join them for coffee. Very cool!

I had heard that he likes ice cream but stays away from pasta and heavy starches. He did eat all of his risotto, though, and couldn’t resist the apple tart. The Pope’s NYC lunch and dinner menus can be found here, which includes, appropriately, angel food cake. 🙂 Hearing about him sipping espresso and chatting informally with Lidia and Angelo just makes me love him more. Read about Lidia’s latest children’s cookbook, Lidia’s Egg-citing Farm Adventure, which I reviewed this past Spring. 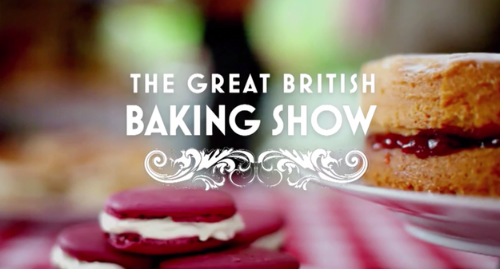 4. Are you a fan of The Great British Baking Show (airs on PBS Sunday nights)? This BBC series is called “The Great British Bake Off (GBBO)” in the UK and has been running since 2010, but it only began airing here in the U.S. this year. Anyway, it’s a fun amateur baking competition held in a lovely outdoor marquee in Welford Park, Berkshire. I confess I don’t watch many Food Network competitions anymore, but I do make time to watch The Great British Baking Show. I’m a sucker for British humor, flavor and flair; who can resist those lovely pastel baking stations and stand mixers? Besides, where else can you hear: “a good bake!” and “absolutely scrummy!”?

Anyway, by way of introducing the contestants’ bakes, they show an artist’s rendition of the finished product. Here’s an interesting interview with artist Tom Hovey, who’s been creating these wonderful illustrations since the show’s inception. He especially loved drawing Paul’s King of the Jungle bread sculpture and Flora’s Honey and Earl Grey Tea Box. Fun!

5. Just in case you’re hungry for some tasty recipes that will resonate with your munchkins, check out “26 Iconic Foods from Disney Movies You Can Actually Make.” Yes, the classic Lady and the Tramp Spaghetti and Meatballs is included, along with such interesting possibilities as Tiana’s Gumbo (The Princess and the Frog), Belle’s Porridge (Beauty and the Beast), and Kronk’s Spinach Puffs (The Emperor’s New Groove). Invite me over when you make one of these. 🙂

6. Up for a little Jane Austen shopping spree? There seems to be NO END to the fabulous wares tempting the pocketbooks of Janeites everywhere. In “Tea Cozies, Tote Bags and Colin Firth,” Kelly Faircloth reassures us that the Austen souvenir industry continues to thrive, branching out from the usual bookmarks, mugs, and totes to bottles of gin, feather quills, wrapping paper and Mr. Darcy paper dolls (want!).

I confess that thus far I have exercised utmost restraint — having in my possession only one Mr. Darcy mug (which pictures Colin Firth as Mr. Darcy of course). But those pretty china cups and saucers and tea cozies are calling my name. I will resist. I. will. resist. I  w – i  – l – l . . . 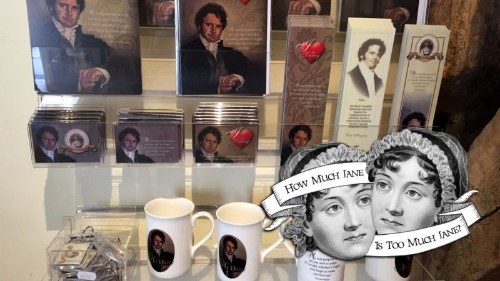 7. Every once in awhile, you might feel like rocking your mid-day meal. How about this cool guitar case lunch box? Imagine how much fun your sandwich, fruit and snacks will have jammin’ together! It could get a little noisy, though, especially if you work in a library or museum. Best not to pack any musical fruit to add to the cacophony. Bean there, done that. 😀

8. Author, Poet, and part-time Pirate Mary Quattlebaum has gone underground — for her latest book that is. Check out Mighty Mole and Super Soil (Dawn Publications, 2015), illustrated by Chad Wallace: 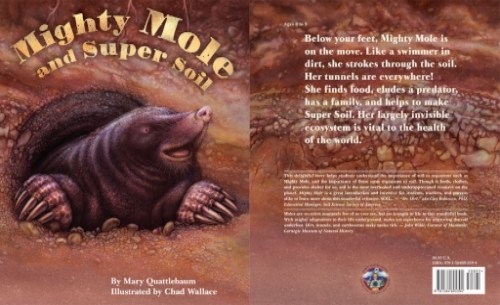 Below your feet, Mighty Mole is on the move. Like a swimmer in dirt, she strokes through the soil. Her tunnels are everywhere! She finds food, eludes a predator, has a family, and helps to make Super Soil. Moles live almost everywhere yet are rarely seen. Similarly, soil is a largely invisible ecosystem and yet is vital to the health of the world. Following the story, two “Explore More for Kids” pages offer a matching challenge and a review of some of the remarkable traits that make moles “mighty.” Two additional pages of “Explore More for Teachers and Parents” offers activities in visual and language arts, science, technology, and math.

Definitely a cool way to learn about the underground ecosystem and discover the fascinating “superpowers” of this undersung hero, who helps make our soil healthy — and we all know that nutrient rich soil is necessary to grow plants (food! oxygen!). Don’t miss the free downloadable activities at the publisher’s website!

9. As a longtime fan of “The Waltons,” I was pleased to learn that a new documentary about Earl Hamner is now available. Just released in September, Earl Hamner Storyteller highlights not only the work for which he is best known as creator, producer and narrator of “The Waltons,” but also his screenwriting credits for such series as “Falcon’s Crest” and “The Twilight Zone.” Did you know he also wrote the animated film adaption of E.B. White’s “Charlotte’s Web”?

The story behind the genesis of the documentary is interesting too — years ago Earl appeared on “Good Morning, America” with cast members from “The Waltons.” He was seated way in the back, out of sight of the actors. He was hurt at not being identified or acknowledged. Can you imagine? They ignored the real “John Boy”! Earl considers this to be “the most humiliating experience of my life.”

Luckily, sometimes good things can come from bad experiences, as New Jersey producer Ray Castro had watched the show and found the whole thing very disrespectful. He then met with two other producers a few days later and they all decided to film a documentary about Earl’s life and work. Partially crowd funded via Indiegogo, this effort was truly a labor of love to honor a consummate storyteller and national treasure whose writing has entertained and inspired people all over the world for 70 years. 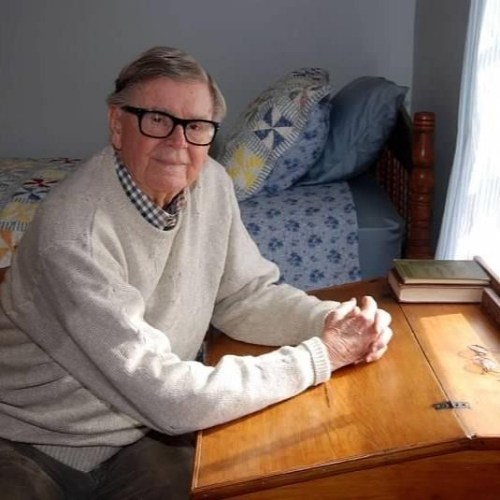 Earl Hamner Storyteller contains interviews with producers, directors, actors, family and friends. Earl travels back to his childhood home in Schuyler, Virginia, and talks with three of his siblings. I’ve been fortunate enough to visit Schuyler and the Walton’s Mountain Museum (click here) and even bake Olivia Walton’s famous Applesauce Cake. For more, including information about how to purchase the video, visit the Earl Hamner Storyteller Website. Watch the official trailer here.

10. Are you starting to feel the heat? I’m having fun scoping out suitable candidates for our new hotTEAs of Children’s Literature series. Really tough work, but somebody’s gotta do it :). Interestingly enough, some of these hotTEAs have asked whether any females will be featured. After all, they deserve a little restorative eye candy too. So, by popular demand, and because we’re equal opportunity tea pushers here at Alphabet Soup, we’ll be adding some feminine beauTEA to the pot every now and then. As Penny Parker Klostermann likes to say, brew-la-la!! 🙂

Alrighty, then. What’s on tap for you today? 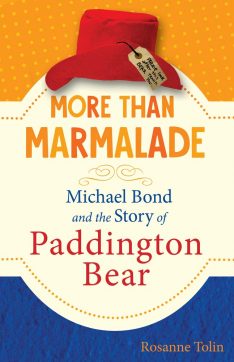 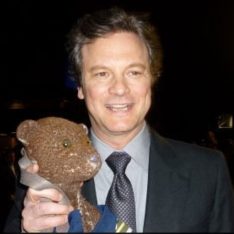