#52 in an ongoing series of posts celebrating the alphabet.

Tear the ticket.
Load the freight.
Sound the whistle.
Raise the gate.

All Aboard, Letter-lovin’ Railroad Buffs!

Author Samantha R. Vamos is here to tell us all about her clickety-clack-cool new rhyming picture book Alphabet Trains (Charlesbridge, 2015)!

Not too long ago, we had so much fun cruising and vrooming through Alphabet Trucks (Charlesbridge, 2013), that we were pretty excited when this shiny new book hit the rails.

Since I’m especially fond of trains (blame it on the Beatles’ “A Hard Day’s Night” and the fact that I met my husband in London while he was designing a railroad in Algeria), I was anxious to ask Samantha a few questions about writing and researching this 26-track gem. 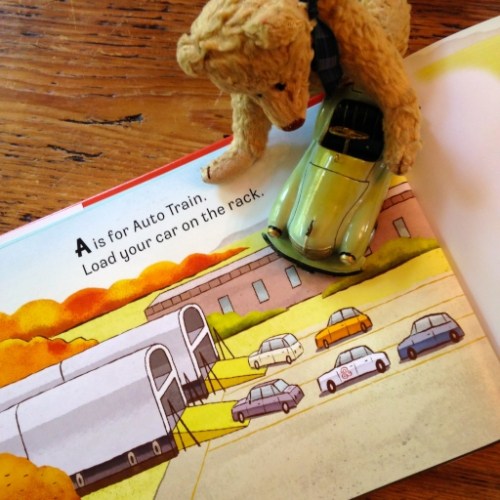 A is for Auto Train,
Load your car on the rack.

B is for bullet train —
high speed on welded track.

With pitch perfect rhyming couplets once again illustrated by Ryan O’Rourke, Samantha features a different train for each letter of the alphabet, succinctly defining it by the job it performs (auto train, freight train, snowplow train), its structural/mechanical uniqueness (monorail, incline train, narrow-gauge) or its location-specific route (Rocky Mountaineer, Victoria Express, California Zephyr). She also includes a bit of history with the Jupiter (part of the Golden Spike ceremony in 19th century Utah).

Budding choo-choosers will have a blast riding the rails in the Swiss Alps, catching some zzzzz’s between Germany and Switzerland aboard the Komet, or waving their white flags to board the Hurricane Turn in Alaska.

Whether climbing steep hills or zooming along coastlines, past cityscapes or breathtaking natural vistas, young readers will have fun meeting the trains, practicing their alphabet, counting the upper and lowercase letters cleverly incorporated in the pictures, learning new words, and maybe even making up their own stories from scene to scene. Grown-ups will enjoy sharing their own railway memories (how many of the trains in the book have you ridden, Mom and Dad?). More information about each train type is included at the end.

Oh, there’s the whistle. Time to chat with Samantha. Full steam ahead!

🚂 ON THE WRITE TRACK WITH SAMANTHA R. VAMOS 🚃

What was the best part of writing this book?

The research! Writing Alphabet Trains required that I research the incredibly diverse world of trains. My editor (Yolanda Scott, Charlesbridge Publishing) wanted trains that were geographically well distributed. Between that instruction and the format of Alphabet Trains and its companion book, Alphabet Trucks with rhymes about a vehicle’s purpose, function, or feature, I reviewed a lot of trains! With the exception of one historic locomotive – the Jupiter – all the trains are operational today.

Can you share a few tidbits from your research that you found especially interesting or surprising?

I’ve been hoping someone would ask this question! I’ll categorize them as: 1) express trains; 2) luxury trains, including two very different “blue” trains, and 3) terrifying routes. I’m by no means mentioning all trains that fit into these categories.

First, a number of train titles include the word “express.” Alphabet Trains features three such trains including Switzerland’s Glacier Express, which offers panoramic views of the Swiss Alps. I especially like the Glacier Express title because it’s an oxymoron. The train is touted as “the world’s slowest express train” taking 7.5 hours to travel a 169-mile route at approximately 23 miles per hour.

Devastating stories behind construction of the “Lunatic Express” (the colloquial title for the Uganda Railway) intrigued, but I wasn’t able to incorporate the train into the manuscript. The titles “Lunatic Express” or “Lunatic Line” (Africans called it the “Iron Snake”) seemed fitting because of innumerable obstacles – some fatal – related to the railway’s 1896-1901 construction, including a pair of lions dragging workers from their tents at night (estimated 28-35 victims), workers being infected by diseases, encounters with hostile tribes, high cost, and challenging construction problems.

While Alphabet Trains includes one luxury train (the Victoria Express), there are many more around the world. An early (1902) luxury express train titled the “20th Century Limited” traveled nightly between New York and Chicago. The New York Central Railroad welcomed 20th Century Limited passengers by rolling out a crimson carpet. It is believed that the phrase “red carpet treatment” originated with this train. The 20th Century Limited offered secretarial services, a barbershop, and sleeper coaches, among other amenities. 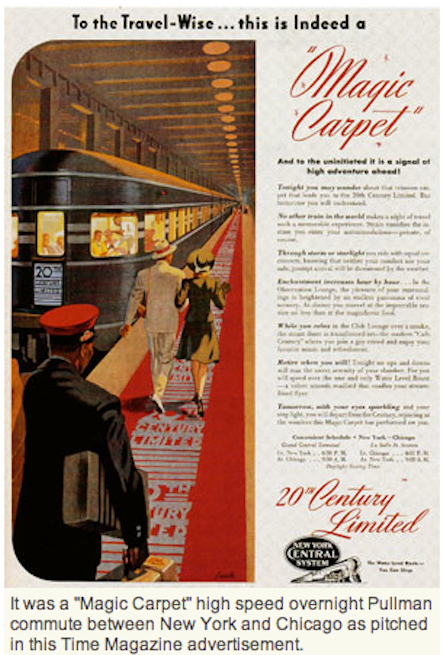 The Flying Scotsman, which in 1928 offered the first ever non-stop rail travel between London, England and Edinburgh, Scotland, featured amenities such as a theatre (“cinema coach”) and a hair salon. British Rail retired the Flying Scotsman in 1963. The train is in the process of being restored and expected to run again in February 2016. 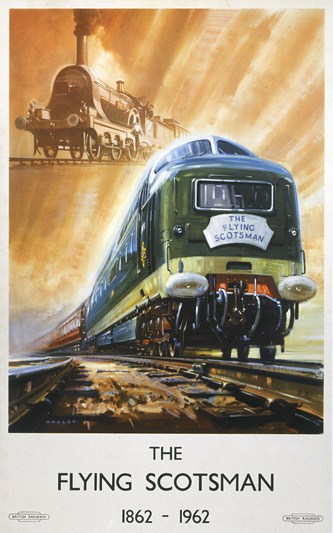 South Africa’s historic and luxurious The Blue Train with its blue locomotives, railroad cars, and blue leather seats looks incredible, and who can decline fine dining and butler service?

A world away from South Africa, another blue train was dubbed “The Seashore’s Finest Train.” That train, the Blue Comet, was a 1930’s luxury train that ran from Jersey City to Atlantic City. The Blue Comet’s exterior was designed to highlight the blue and cream color scheme of the New Jersey seashore. In addition, passenger cars, upholstery, porters’ uniforms, schedules, menus, and tickets were all blue. Each train car was named after a comet (including Halley’s Comet) and the windows were etched with comets and stars. The Blue Comet ran until 1941, but its introduction coincided with the onset of the Great Depression and the Blue Comet’s success was short-lived. If I could have ridden any historic train, it would have been this one.

In the 1930’s Lionel Trains sold a standard gauge model of the Blue Comet (because Joshua Lionel Cowen, Lionel Corporation founder, rode the train and was a Blue Comet fan). You can view an actual model on PBS’s “Antiques Roadshow,” during which the appraiser estimates that the Lionel Train model could sell as high as $10,000 at auction.

In terms of entwining history with popular culture, while reading about the Blue Comet, I came across a reference to the HBO series “The Sopranos.” Season 6, Episode 20 is titled, “The Blue Comet” and features character Robert Baccalieri, Jr. (a/k/a “Bobby Bacala”) in a model train store with a replica of the Blue Comet (on sale for apparently $8,000). I can’t say that good things happen to Bacala at the train store, but it was entertaining to discover the reference.

Third, there were trains with rides that sounded slightly terrifying – including, for example, the Peruvian Central Railway (Ferrocarril Central del Perú (FCC)), described as the world’s second highest railway, climbing 13,000 feet and the Lhasa trains on the high-elevation railway in Tibet. Both railways include onboard physicians and the Lhasa trains carry an oxygen supply for each passenger.

W is for wilderness train,
a wildlife tour on rails.

X is for Xplorer,
a trip through New South Wales.

Do you find it easy or difficult to write in rhyme?

I enjoy writing rhyme, but I need to count syllables on my fingers when I’m structuring a phrase and I also say the phrase aloud in order to learn where to place emphasis. What I’ve especially enjoyed about writing this alphabet transportation series is working through the challenge of creating rhymes that reveal either the purpose or a unique feature of two different vehicles. It’s interesting to think about which two words will emerge as central.

Why are the bullet train and Pacific Surfliner your favorites?

My mother, who lived in Southern California for 22 years, introduced me to the Pacific Surfliner. Recalling those memories, I feel especially connected to that train. We rode the Pacific Surfliner to Santa Barbara and to Los Angeles on different trips. I love that the train reveals the gorgeous coast, showcasing beach and ocean views, palm trees, flowers, and hills. When I realized that the train has a rack for both bicycles and surfboards, I was charmed. I like the fact that technology is embracing culture – surfers can pack their board and ride the rails. 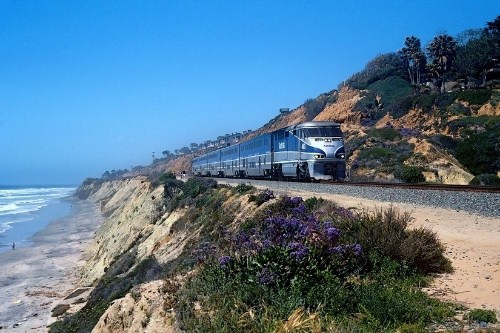 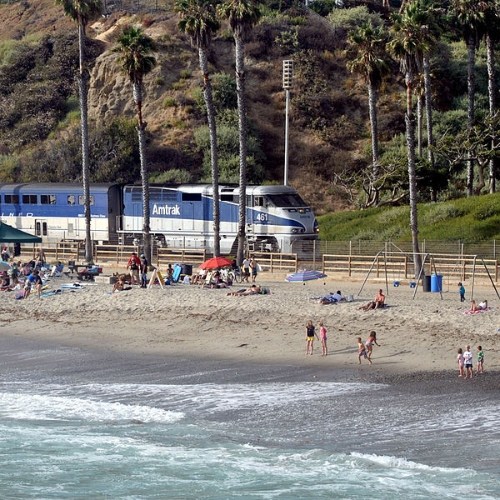 Which of the other trains featured in the book have you personally ridden on? Have you ever ridden in a dining car?

E: I’ve ridden on elevated trains in many cities. The trains that I’ve ridden most frequently include Chicago’s “L” train, which was the first rhyme I wrote for Alphabet Trains, and Vancouver, BC’s SkyTrain.

I have never ridden in a formal dining car (three summers ago, we rode a Eurostar train through the Chunnel and had breakfast, but we were not in a formal dining car). If I could select any dining car in which to ride it would be the Venice Simplon-Orient-Express (“VSOE”). I’d love to ride a signature journey on the VSOE from Paris to Budapest to Bucharest to Istanbul.

Did you ride on trains when you were growing up?

Yes. I lived in the Washington, DC area for twenty-five years, riding the DC Metro and Amtrak trains up and down the east coast. When I was thirty, I moved to Chicago and rode Chicago’s L with regularity – to work, going out, to the airport – everywhere. My husband and I bought our first car after I turned 40 so there were many years of public transportation!

Which of Ryan O’Rourke’s illustrations is your favorite and why?

That’s a difficult question to answer. I love the E/F spread because in a single scene, Ryan seamlessly combined two, very different trains. I’m also a fan of K/L – not just because I’d love the opportunity to ride the Leonardo Express, but also because I like the contrasting night scene with the Komet train. I love the two coloring pages Ryan created – one for each of Alphabet Trucks and Alphabet Trains that complement the respective books. I have colored each page!

What is your favorite letter of the alphabet and why?

I like that there is a letter that symbolizes sleep. Z seems like the letter that would have the most dashing and robust personality and truly, Z needs a lot of confidence as it’s the 26th letter. In addition, there are so many great words beginning with Z: zeitgeist, zephyr, zodiac, zoological, zelophobia (a dreadful fear of jealousy!), and zinnia, among others.

Will there be another book in this series?

Yes! The third book in this alphabet transportation series, Alphabet Boats releases in 2017. I’m actually in the midst of edits right now.

Thanks so much, Samantha!!

I’ve always wanted to eat in a formal dining car — white linen tablecloths and napkins, lovely china in the railroad’s unique pattern, gorgeous vistas right outside the window. Since this won’t be happening anytime soon, and Mr. Cornelius felt sorry for me, he created his own snack time train made from peanut butter and strawberry jam sandwiches, round butter crackers, extra sharp cheddar, and mini breadsticks. He invites you to take a nibble or two. 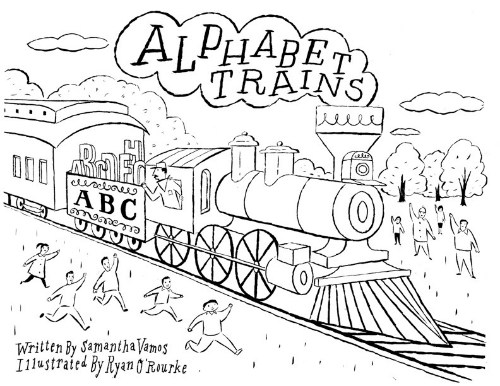 Katya is hosting today’s Roundup at Write. Sketch. Repeat. Climb aboard a bullet train and zip over to check out the full menu of poetic goodness on this week’s menu.

Certified authentic alphabetica. Made by hand especially for you with love, chug-a-lugs, and choo-choo’s.