I’ve been an oatmeal-for-breakfast girl for quite some time. Sure, I dallied with cold cereal and Pop-Tarts® in my reckless youth, and even went through a yogurt, fruit, and granola phase. But now, I look forward to starting each day with a warm, comforting bowl of quick cooking oats.

When you live with more than a few bears (300+ and counting), you can’t help but channel Goldilocks. You bask in the fairy tale dimension of porridge, by now having perfected cooking time, addition of milk, maple syrup, berries and nuts to an enviable “just right.”

Some consider oatmeal bland and boring, ooey gooey pablum for the unimaginative. Fie on them, I say! Obviously they haven’t considered oatmeal’s poetic possibilities. Think of Galway Kinnell, who eats his oatmeal with charming companions like John Keats. And then there’s the inimitable Stephen Dobyns, whose tragicomic oatmeal fantasy reads like the magic porridge pot meets roguish Rodin. While some may sow their wild oats, others sculpt them. No time for mushy romance.

Love me, love my oatmeal. How will you shape your destiny?

This morning, because the snow swirled deep
around my house, I made oatmeal for breakfast.
At first it was too runny so I added more oatmeal,
then it grew too thick so I added water.
Soon I had a lot of oatmeal. The radio
was playing Spanish music and I became
passionate: soon I had four pots of oatmeal.
I put them aside and started a new batch.
Soon I had eight pots. When the oatmeal cooled,
I began to roll it with my hands, making
small shapes: pigs and souvenir ashtrays. Then
I made a foot, then another, then a leg. Soon
I’d made a woman out of oatmeal with freckles
and a cute nose and hair made from brown sugar
and naked except for a necklace of raisins.
She was five feet long and when she grew harder
I could move her arms and legs without them
falling off. But I didn’t touch her much –
she lay on the table – sometimes I’d touch her
with a spoon, sometimes I’d lick her in places
it wouldn’t show. She looks like you, although
her hair is darker, but the smile is like yours,
and the eyes, although hers are closed. You say:
what has this to do with me? And I should say:
I want to make more women from Cream of Wheat.
But enough of such fantasy. You ask me
why I don’t love you, why you can’t
live with me. What can I tell you? If I
can make a woman out of oatmeal, my friend,
what trouble could I make for you, a woman? 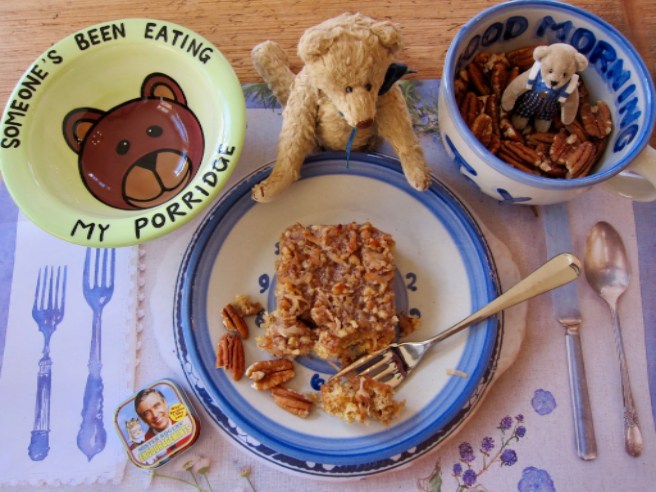 Much as we love our standard bowl of oatmeal each morning, there’s certainly nothing wrong with throwing caution to the wind now and again, and splurging on our own version of Oatmeal Deluxe.

Mr. Cornelius suggested oatmeal cake for breakfast. This sounded very respectable to him (not as naughty as eating oatmeal cookies for breakfast). He found just the recipe at For the Love of Cooking. Apparently the coconut pecan frosting cinched the deal.

The recipe starts out with combining 1/2 cup of oatmeal with 3/4 cup boiling water, then covering the mixture for a bit. Since this was the same thing he usually does every morning, it made him feel considerably less guilty. Oh, a “healthy” cake!

The little rascal didn’t even raise an eyebrow when combining the remaining ingredients (not even for the brown and granulated sugars). Then the cooked oatmeal was mixed in the batter before baking.

The coconut pecan “frosting” is actually a topping consisting of chopped nuts, shredded coconut, brown sugar, melted butter, and a little milk and vanilla. This was spread on the baked cake before putting it under the broiler for a few minutes until the coconut was nicely toasted.

I suppose one could categorize this as a coffee cake, and it would certainly be welcome at brunch or for a quick and easy dessert any time. Still, we enjoyed a piece for breakfast with a tall glass of milk, happy with the thought of giving ourselves a treat. The cake was nice and moist, the added oatmeal gave it a pleasant chewiness, and the topping reminded me of carrot cake without the cream cheese. We have a feeling Mr. Dobyns wouldn’t mind having oatmeal cake for breakfast either. Enjoy!

Mix the oatmeal with the boiling water, stir and cover. Mix the remaining ingredients, then stir in the oatmeal mixture. Grease and flour an 8″x8″ pan. Pour batter into pan and bake at 350 for 23-25 minutes.

Combine all ingredients and mix thoroughly. Carefully spread frosting over the top of the cake. Broil until coconut is just brown. Watch very closely — it doesn’t take long. Cool, slice and serve.

Credit: For the Love of Cooking (original recipe from Coleen Nelson and Julia)

Thanks for all your good comments here and on Facebook! So nice to hear from so many Emily fans. Monsieur Random Integer Generator, who has been enamored of Ms. Dickinson for years and years (he can’t resist a woman who bakes good gingerbread), was honored to pick the winner for this giveaway, who is:

Please send your snail mail address to: readermail (at) jamakimrattigan (dot) com so we can get your prize out to you lickety split.

Thanks again to everyone for entering!

Katie is hosting the Roundup at The Logonauts. Scamper over and check out the full menu of poetic goodness being served up in the blogosphere this week. Enjoy your weekend!

This post is also being linked to Beth Fish Read’s Weekend Cooking, where all are invited to share their food related posts. Put on your best aprons and bibs and come join the fun!