So begins one of the most famous folk songs of the twentieth century. Here in America, many of us grew up hearing it on the radio or at music festivals, or maybe even in the classroom.

Though I was familiar with the popular renditions of “Freight Train” by Peter, Paul and Mary, Pete Seeger, and Joan Baez, I never really knew who wrote the song, nor had I heard of African American folk musician, singer and songwriter Elizabeth Cotten before reading this fabulous new picture book.

In Libba: The Magnificent Musical Life of Elizabeth Cotten by singer-songwriter Laura Veirs and debut illustrator Tatyana Fazlalizadeh (Chronicle Books, 2018), we see how Libba ultimately accomplished “what she was born to do” despite the many ups and downs in her life.

Libba grew up poor in the segregated South, but she was blessed with a musical gift. Early on, her natural ear was attuned to the unique melodies she heard all around her.

She was born into a musical family near Chapel Hill, North Carolina, in 1893. As a child, she liked to make up songs with her older brother Claude. While he was at work, she snuck into his room and taught herself to play his guitar, which was strung for a right-handed player. But Libba was left handed, so she had to turn the guitar upside down and play it “backwards.” She invented her own way of playing, a way that felt right to her.

When Claude moved away from home, he took his guitar with him. So Libba worked as a domestic helper to earn money to buy her own instrument. She made 75 cents a month and eventually bought a Stella guitar for $3.75. 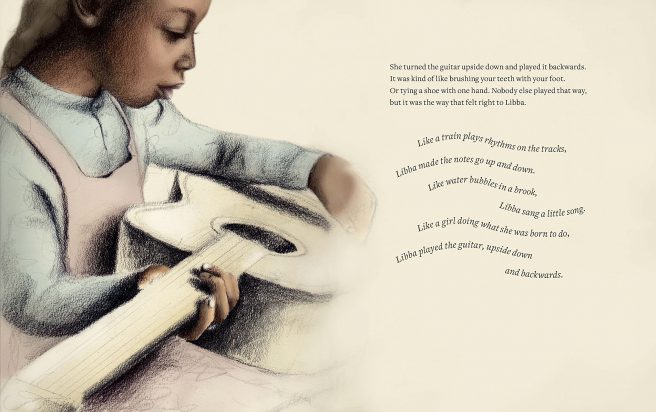 Then she practiced. And practiced — staying up late learning new songs after hearing them just once or twice. She became very proficient at the guitar and began writing her own songs.

Her first, “Freight Train,” was written when she was just 11, and was inspired by the sound of a train she often heard while lying in her bed at night.

But life happened, and her musical aspirations were temporarily derailed for decades. She did domestic work, got married as a teen, had a daughter, and moved with her family around the eastern U.S. When her daughter married, Libba divorced her husband and moved to Washington, D.C., to live with her.

Now a grandmother, Libba took a job working at a department store selling dolls. One fortuitous day, she helped a little girl who was lost in the store find her mother. That woman turned out to be Ruth Crawford Seeger, an eminent composer and music teacher (and stepmother to Pete Seeger). The two women took to each other instantly, and soon after, Libba accepted Ruth’s offer to work as her housekeeper.

Libba couldn’t have found a better family to live with, since the Seeger family home was always filled with music.

While Libba was busy cooking, baking, and taking care of the children, she heard “banjos in the bedrooms, pianos in the parlor, and bass drums in the basement.” Musicians like Lead Belly, Woody Guthrie, and Muddy Waters passed through. Libba listened and joyfully rediscovered her passion for music.

One day the family heard beautiful sounds coming from the kitchen. Libba was singing and playing! They all asked to hear more and soon some of the bluesmen were playing Libba’s songs, too. 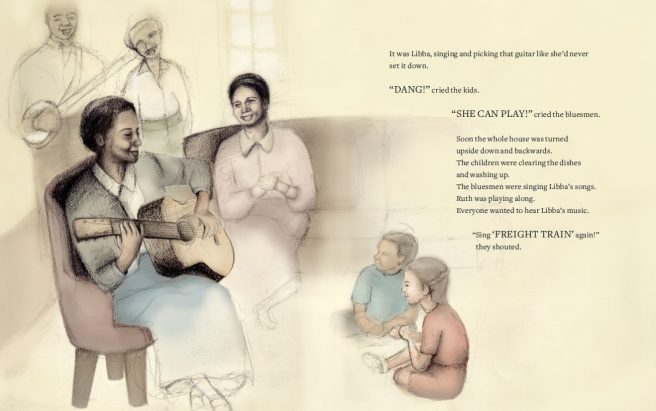 The Seegers believed in Libba and her natural, God-given talent. Though they helped spread the word about her music, “it was Libba’s perseverance, her love of music, and her belief in herself that gave the world her voice.”

Libba’s “Freight Train” was soon being sung around the world. She performed all over the U.S. and Europe in her sixties, seventies, and eighties, and earned a Grammy when she was in her early nineties.

Veirs’s lyrical narrative will captivate young readers, who’ll be inspired to listen to Libba’s music and learn more about her. Veirs makes good use of the train metaphor throughout to describe the rhythms of Libba’s life and her resilience and determination: “Libba Cotten never stopped in her tracks. She kept rolling.” 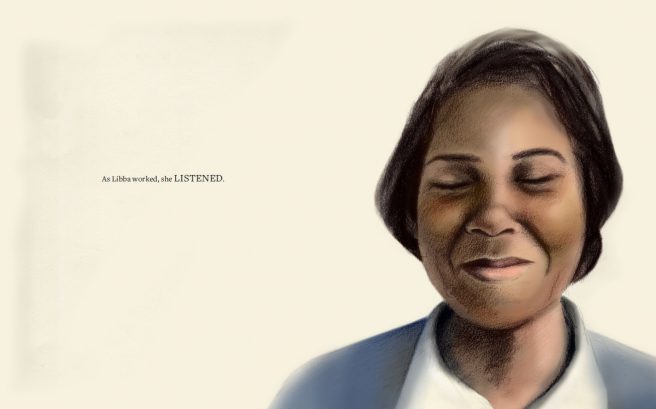 Tatyana Fazlalizadeh’s gorgeous graphite and digitally colored illustrations lovingly evoke days gone by and the humble but enduring roots of folk music. Her portraits of Libba as a girl and a woman are especially luminous, as they capture her gentle spirit, warmth, and grace. With her eyes closed and a smile on her face, Libba listens deeply, joyfully attuned to the music without and within.

It’s good to be reminded that you’re never too young or too old to follow your dreams and fulfill your potential. For many years, Libba had to give up the one thing she loved the most, but through lucky happenstance, she later found herself at precisely the right place with the right people at the right time.

The little girl who taught herself to play the guitar “upside down and backwards” launched a professional career in her late 60’s and became an American folk music icon. Her unique style of picking the bass strings with her fingers and the melody (treble) strings with her thumb (aptly named “cotten-picking”) has inspired and influenced generations of younger musicians. Libba was also a key figure in the 60’s folk revival.

Veirs has included a lengthy Author’s Note with more details about Cotten’s life and her relationship with the Seegers. Libba had quite an extensive musical repertoire that included “standards, dance tunes, and rags,” and she was also self taught on the banjo since childhood.

Veirs mentions hearing “Freight Train” as a child growing up, learning the complex fingerstyle technique of the song while studying country-blues guitar in her twenties, and finally discovering the story of Libba’s chance meeting with Ruth Seeger while recording her first album of songs for children.

Truly a magnificent musical life, Libba’s story is well worth reading, a natural choice for Black History and Women’s History months, and a must read for folk music aficionados.

There are many good Elizabeth Cotten videos available online. Here are two of my favorites. In the second one, Libba tells Pete Seeger about when she met his stepmother Ruth Seeger in the department store. Check out her impressive picking technique in the Wilson Rag! 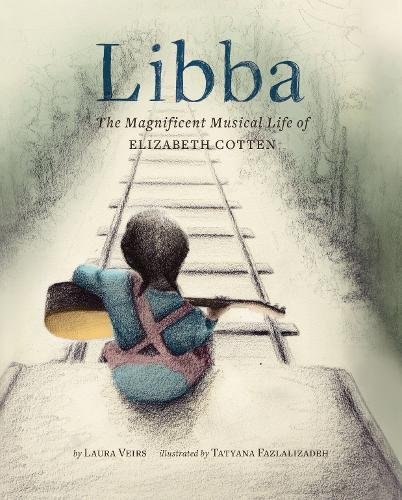 The publisher is generously donating a copy of LIBBA for one lucky Alphabet Soup reader. For a chance to win, simply leave a comment at this post no later than midnight (EST) Wednesday, March 7, 2018. You may also enter by sending an email with LIBBA in the subject line to: readermail (at) jamakimrattigan (dot) com. Giveaway open to residents of the U.S. and Canada only, please. Good Luck!

The beautiful and multi-talented Renée LaTulippe is hosting the Roundup at No Water River. Sail on over to check out the full menu of poetic goodness being served up in the blogosphere this week. Happy March!

**This post contains Amazon Affiliate links. If you purchase something using a link on this site, Jama’s Alphabet Soup will receive a small referral fee (at no extra cost to you). Thank you for your support.