“Pie, in a word, is my passion. Since as far back as I can remember, watching my mom and dad make their apple pies together every fall as a young boy, I have simply loved pie. I can’t really explain why. If one loves poetry, or growing orchids, or walking along the beach at sunset, the why isn’t all that important. To me, pie is poetry that makes the world a better place.” ~ Ken Haedrich (Pie: 300 Tried-and-True Recipes for Delicious Homemade Pie)

Imagine what it must be like to have everyone squeal with delight upon seeing you.

You look soooooo good, they all say, you’re exactly what we wanted! You remind us of Grandma and all that is right with the world.

So you bask in the glory, maximize your flake. Living a life of applause is the only way to go.

PERFECT FOR ANY OCCASION
by Alberto Ríos

Pies have a reputation.
And it’s immediate — no talk of potential

Regarding a pie. It’s good
Or it isn’t, but mostly it is — sweet, very sweet

Right then, right there, blue and red.
It can’t go to junior college,

Work hard for the grades,
Work two jobs on the side.

It can’t slowly build a reputation
And a growing client base.

A pie gets one chance
And knows it, wearing as makeup

Those sparkling granules of sugar,
As a collar those diamond cutouts

Bespeaking Fair Day, felicity, contentment.
I tell you everything is great, says a pie.

Great, and fun, and fine.
And you smell nice, too, someone says.

A full pound of round sound, all ahh, all good.
Pies live a life of applause.

But then there are the other pies.
The leftover pies. The ones

Nobody chooses at Thanksgiving.
Mincemeat? What the hell is that? people ask,

Pointing instead at a double helping of Mr.
“I-can-do-no-wrong” pecan pie.

But the unchosen pies have a long history, too.
They have plenty of good stories, places they’ve been —

They were once fun, too —
But nobody wants to listen to them anymore.

That’s never the end of the story, of course.
Some pies make a break for it —

Live underground for a while,
Doing what they can, talking fast,

Trying to be sweet pizzas, if they’re lucky.
But no good comes of it. Nobody is fooled.

A pie is a pie for one great day. Last week,
It was Jell-O. Tomorrow, it’ll be cake.

Are you swooning over “A full pound of round sound, all ahh, all good”? 🙂

Must say, haven’t seen rhyme used to such tantalizing effect in a long time . . .

This poem made me an instant Alberto Ríos fan. Nothing more delightful than celebrating pie while contemplating larger truths tucked beneath the crust, such as — seize the day, easy come-easy go, aging and invisibility, the inevitability of change.

I’ve been thinking about the leftover pies, the unchosen ones. “Leftover pie” is not really part of the Alphabet Soup vocabulary — “disappearing pie” is more like it. 😀 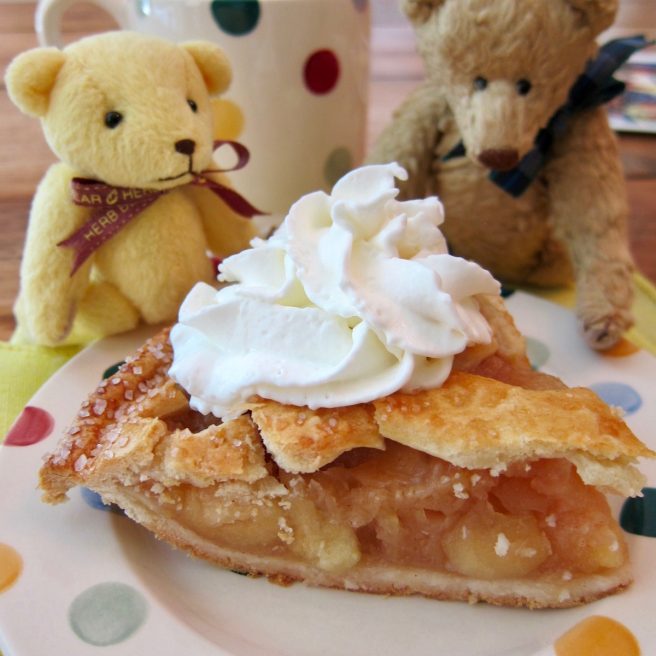 The poet also implies that there are some pies that have fallen out of favor — once chosen and enjoyed, but somehow no longer appreciated. I suppose there are some vintage pies we don’t see as often anymore — remember lemon chiffon, grasshopper, vinegar, or chess pie?

And I don’t really mind mince pie because it makes me think of British Christmases. 🙂

BUT. The thing about pie is that the more “old fashioned” it is, the more we love it. Sure, there are some cute ‘n sassy hand pies making the rounds these days, but nothing comes close to a homemade deep dish apple pie, or other perennial faves like pumpkin, blueberry, peach, chocolate cream, and lemon meringue.

Because pies, are, you know, FOREVER.

What’s your favorite pie? Do you have a fond pie memory to share?

Alberto Ríos is the author of 11 collections of poetry, including Whispering to Fool the Wind (1982), which won the Walt Whitman Award; The Smallest Muscle in the Human Body (2002), which was nominated for a National Book Award; and, most recently, A Small Story About the Sky (2015). He has also written three collections of short stories and one memoir. Ríos’s work has been included in over 300 journals and over 250 anthologies, and he was featured in the documentary Birthwrite: Growing up Hispanic. His awards include fellowships from the Guggenheim Foundation and the National Endowment for the Arts, as well as the Walt Whitman Award, six Pushcart Prizes, the PEN Open Book Award, and the Latino Literary Hall of Fame Award. In 2014, he was elected a Chancellor of the Academy of American Poets. Currently the first state poet laureate of Arizona, Ríos is also the Regents Professor of English and the Katharine C. Turner Endowed Chair in English at Arizona State University in Tempe.

The lovely, lithe, literary and eminently likable Linda Baie is hosting the Roundup at TeacherDance. Tiptoe on over to check out the full menu of poetic goodness being shared in the blogosphere this week. Enjoy your weekend. 🙂

“The sandy beach reminded Harold of picnics. And the thought of picnics made him hungry. So he laid out a nice simple picnic lunch.

There was nothing but pie. But there were all nine kinds of pie that Harold liked best.

When Harold finished his picnic there was quite a lot left. He hated to see so much delicious pie go to waste.

So Harold left a very hungry moose and a deserving porcupine to finish it up.”

47 thoughts on “wrap your lips around this: “Perfect for Any Occasion” by Alberto Ríos”