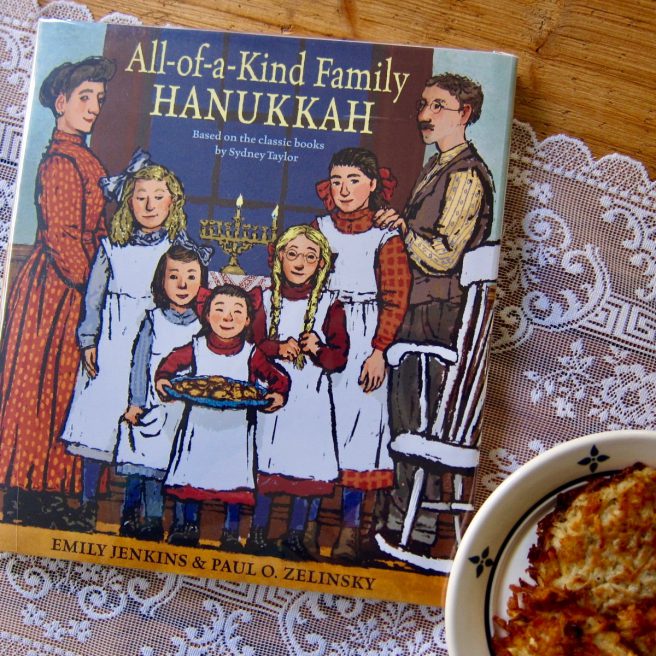 When I was nine, there was nothing I wanted more than to belong to the All-of-a-Kind Family.

I loved the idea of having four sisters, all of us wearing our white pinafores as we traipsed to the library Friday afternoons and spent our pennies for treats on Rivington Street. Would I get a warm sweet potato like Ella, hot chick peas like Sarah, or candied fruit on sticks like Charlotte and Gertie? I don’t think I’d opt for a fat, juicy sour pickle like Henny did. 🙂

I’m guessing most of us who loved Sydney Taylor’s classic AOAKF books imagined ourselves as one of these girls, perhaps the one closest to our own age. But since we got to know them all so well, we were probably able to find parts of ourselves in each of them.

Months ago, when I first learned that Emily Jenkins and Paul O. Zelinsky were publishing a new picture book based on Taylor’s series, I reread all five books and fell in love with them all over again. So wonderful to feel the comforting embrace of this close-knit family and immerse myself in their turn-of-the-century world. I was once again charmed and captivated by Taylor’s writing, appreciating anew her ability to speak of and to a child’s heart with such candor and truth.

But I did wonder how Emily and Paul would be able to create the same kind of magic in a 40-page picture book. I needn’t have worried. I love All-of-a-Kind Family Hanukkah. In fact, it’s my favorite food-related picture book of 2018! 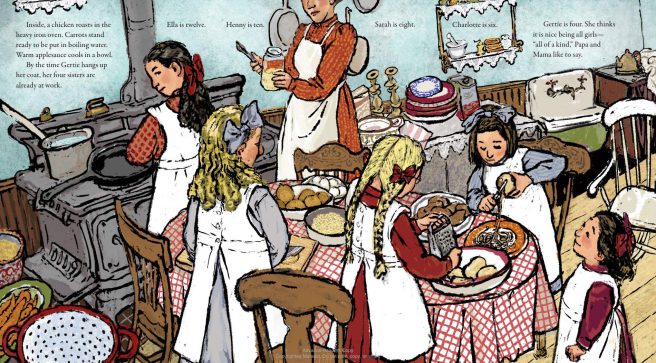 In this heartwarming story, four-year-old Gertie takes center stage. It’s the first night of Hanukkah, and the family is busy making latkes together. Each of the sisters has a job –Charlotte peels the potatoes, Sarah grates them, Henny chops the onions, and Ella, the oldest at age twelve, will be frying them. Mama has cracked the eggs and mixed them with salt and matzo meal. 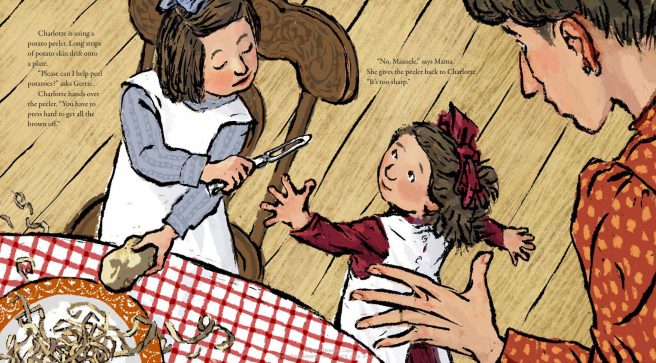 But what about Gertie? All she wants to do is help, but she’s told she’s too little. The potato peeler and grater are too sharp, the knife, far too dangerous, and of course Gertie must keep a safe distance from the big frying pans on the stove, since “the grease could spit and burn her.” No, no, no, is all she hears, until she can’t stand it anymore. “I want to help!” she shouts, stomping her boots on the kitchen floor.

Everyone stares at tantrum-throwing Gertie. Then Mama quietly takes Gertie to the bedroom and tells her to stay there until it’s time to say the blessings. Miserable, Gertie crawls under the bed.

It is cold on the floor.

They will miss her when they can’t find her.

Mama will be sorry she didn’t let Gertie help. She will wish she’d been nicer to her Mäusele.

Poor Gertie. She can hear her sisters having so much fun working together in the kitchen. They’re laughing as they set the table. And the heavenly smell of latkes is definitely making her hungry. Potatoes and onions frying in schmaltz! Mmmmm! Will Mama ever call for her?

Finally, “Papa’s feet appear by the bed.” He gently coaxes Gertie out from under the bed with funny talk and a gingersnap. As she throws her arms around Papa’s neck, he tells her how glad he is to see her, sorry that she’s had a hard day. He asks her if she’s old enough to help light the menorah. Of course she is!

Then, when they’re all at the table, Mama gives the first latke to Gertie! They have roast chicken, carrots and applesauce with their latkes, “which taste of history and freedom, of love and crispy potato.”

Jenkins’s deftly crafted narrative captures the essence of the family dynamic we’ve come to cherish, spotlighting Gertie’s passionate nature while acquainting us with the other characters in just a few lines of dialogue and telling action.

Love how she effortlessly weaves in facts about Hanukkah, reinforcing the sequence of the latkes recipe without distracting from the inherent drama of key moments. My favorite part of the story is when Papa appears in the bedroom and talks to Gertie. We learn so much about his sense of humor, playfulness, and adoration for his little girl in a very short exchange. So endearing!

And a Papa with a gingersnap in his palm is a Papa to love. 🙂

As a big fan of Zelinsky’s work, I remain in awe of his ability to masterfully evoke time, setting, character, mood, and every nuance of emotion via his chosen style. For this book, he used bold strokes and looser lines with a warm, earthy palette of browns, rusts, magenta and dark blues. Textural elements, from big, fat snowflakes, to rough hewn floorboards, to hot vapors rising from frying pans, to curly potato peelings, to the crackly surface of a gingersnap, all add richness, immediacy and sensory realism. 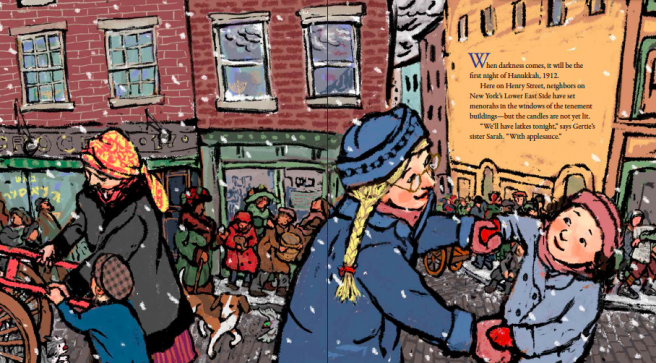 From the opening spreads showing Sarah and Gertie walking in the snow amid the bustle of Henry Street in the Lower East Side, we are so there, and absolutely want to be. Of course I love all the kitchen scenes with the cast iron stove and girls busy around the table making latkes. We’re right in the middle of the action.

All the characters are beautifully drawn, the sisters portrayed as distinct individuals, and Zelinsky uses close-ups to great effect: Ella hugging Gertie, Gertie laughing at Papa’s hand reaching under the bed, Gertie in Papa’s arms lighting the menorah. Pure joy and love, palpable and reassuring.

All-of-a-Kind Family Hanukkah is the perfect introduction for a new generation of younger readers, sure to make them want to read the chapter books. It’s also a treasure for AOAKF diehard fans of any age. The Author’s Note discusses Sydney Taylor’s background and how she came to write the AOAKF stories, as well as information about Hanukkah and New York’s Lower East Side. In his Illustrator’s Note, Zelinsky explains why he chose this particular style of art for this book. 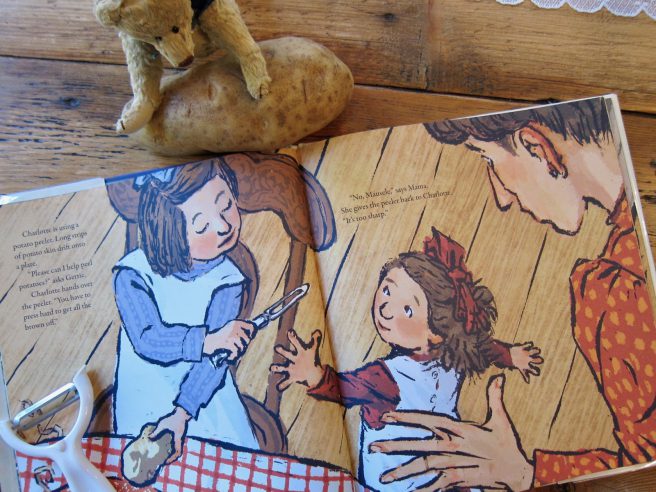 It is good to be reminded of the enduring appeal of family stories written from a well of authenticity. Taylor’s books were the first with Jewish characters to appeal to a mainstream audience. Non-Jewish readers were able to learn about Jewish traditions, while Jewish readers could see themselves mirrored in these books. This broke through prevailing barriers, ultimately paving the way for more children’s books celebrating other ethnicities and religions. 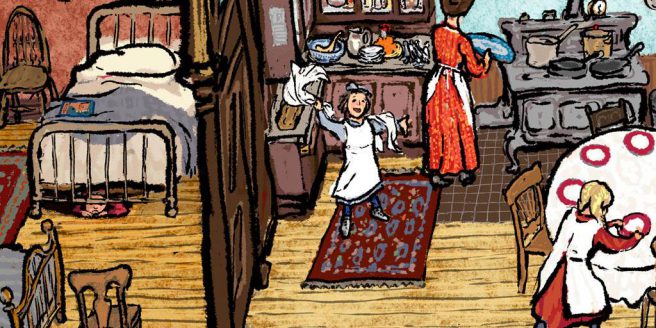 I remember first seeing All-of-a-Kind Family in the public library. Since I didn’t have any Jewish friends, I knew nothing about Jewish culture or the huge immigrant population in the Lower East Side. But I saw those five girls on the cover of the book and knew I had to read it.

Here was a family who lived in a crowded tenement neighborhood. They were poor, but thrived on simple pleasures and doing everything together. How fascinating to learn about Hanukkah and Passover, and to read all the wonderful descriptions of food!

Nothing was ever taken for granted; penny candy was a treasure, and how I longed to eat chocolate babies in the middle of the night, or Mama’s bread and butter sandwiches or chicken soup! And the luxury of store-bought cake! Reading these books made me appreciate the food I ate even more because I wanted to be just like those girls. New York became a faraway dream place I wanted to visit, and to this day it’s never lost its magic.

I do think we gravitate to books that satisfy deep needs. Having grown up with one older brother, I envied my mother, who had four sisters. The All-of-a-Kind Family girls were the closest I would ever come.

Now, in case you’re thinking I’d forgotten about the delicious latkes so lovingly prepared in this new picture book, rest assured that Mr Cornelius (who wants to remind everyone that Hanukkah begins on Sunday, December 2), insisted we make some.

We made “Emily’s Favorite Latke Recipe” from the publisher’s All-of-a-Kind Family Hanukkah webpage (available as a free download). Paul has added comments about how he and his family make latkes too. There are a few differences as to whether to peel the potatoes or not before grating them, how to drain the liquid from the grated potatoes, what kind of oil to fry the latkes in, etc.

Bottom line is that this is a standard but flexible recipe; as long as you adequately drain the liquid from the grated potatoes before frying you really can’t go wrong. What’s not to love about fried potatoes with salt, egg, onion, and matzo meal (or flour)?

We opted to peel our potatoes, then drained the grated potatoes and onion in a colander for about 20 minutes before combining with the rest of the ingredients and frying in canola oil.

They were yummy with applesauce and sour cream — really, a meal in itself.

I have adapted Emily’s and Paul’s recipes here for convenience, but do click through to read the instructions in their own words. Emily’s recipe includes a few safety tips for kid cooks. 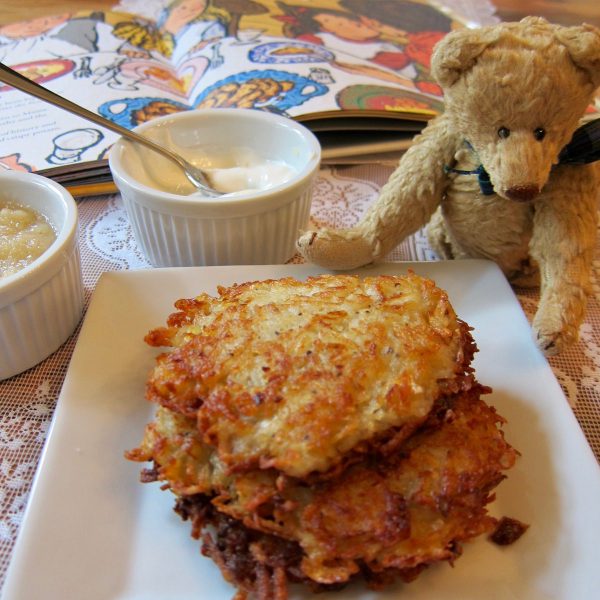 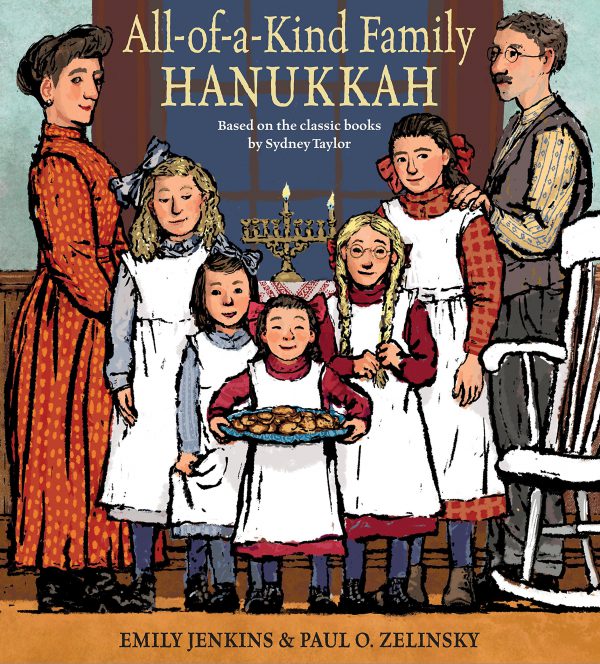 ♥️ Click here for the New York Times FB Live Video with Emily and Paul. There’s interesting backstory and Paul demonstrates how he made the pictures in Photoshop. I was surprised to discover the illustrations were all digital — he brilliantly made them look like paintings.

♥️ And here’s a tasty recipe for Sweet Potato Apple Latkes we previously featured from The Apple Lover’s Cookbook!

This post is being shared with Beth Fish Read’s Weekend Cooking. Put on your best aprons and bibs and come join the fun!

** This post contains Amazon Affiliate links. When you purchase something using a link on this site, Jama’s Alphabet Soup receives a small referral fee at no cost to you. Thanks for your support!