Origami and Poetry: Inspired by Nature (Nosy Crow, 2019), was just released in mid March, and is a wonderful way for kids to extend their enjoyment of poetry with hands-on fun.

This stunning book features nature-inspired poems and origami. For each animal or object, children will be able to read a poem and then make a corresponding origami figure! With clear, simple directions and links to helpful videos for how to make thirteen animals or objects and fifty sheets of origami paper, this is the perfect introduction to the art of paper folding.

You may remember we featured Clover Robin’s work not too long ago; she is brilliant and her love of nature shines through in all her projects. Snip snip snip!

2. Look what’s coming out later this year: Sesame Street postage stamps! In honor of Sesame Street’s 50th Anniversary, the U.S. Postal Service is issuing 16 Forever stamps featuring some of the beloved characters from the show, including Big Bird, Cookie Monster, Bert, Ernie, Oscar the Grouch, Elmo and Grover. Nice to see that Julia, a new character with autism who was introduced in 2017, is also part of the line-up.

My favorite has always been Elmo, though when I get some of these stamps I will use Oscar the Grouch to mail all my bills. 🙂

3. New Book Alert! Check out When a Tree Grows by Cathy Ballou Mealey and Kasia Nowowiejska (Sterling, 2019). We are especially excited because this is Cathy’s first picture book!!

This humorous picture book tells a sweet story of friendship, generosity, and how one fun thing leads to another.

When Moose sees the inviting tree where Squirrel has built his nest, he rubs his itchy antlers against the trunk—and sets in motion a chain of comic catastrophes. The tree falls and wakes Bear, who stumbles into Moose, who causes a truck driver to swerve off the road. But then Squirrel jumps onto that truck and ends up in the city, all alone. Who will help him get home? And how will Squirrel thank them? Kids will love this adorable picture book, with its irresistible animal characters and rhythmic text that’s made for reading out loud. 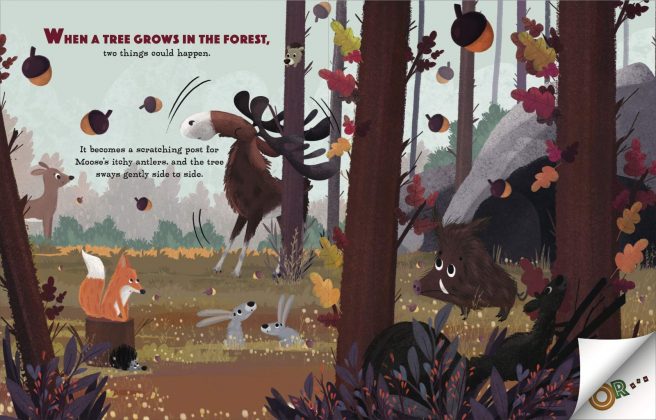 Learn more about Cathy and the book at this Kidlit 411 Author Spotlight, and by checking out Susanna Leonard Hill’s Tuesday Debut.

This story sounds like a riot and I can’t wait to read it. 🙂

4. Any fellow Baby Boomers out there today? Here is something too, too cool: To celebrate the 50th Anniversary of Woodstock, Arlo Guthrie will be playing a free concert on Thursday, August 15, at the original site in Bethel Woods. At this writing, details are still being worked out as to exact time, who else will perform, etc. The Woodstock movie will also be shown for free that day.

There will be other celebrations in other venues (the Official Woodstock 50th Anniversary Concert will be held August 16-19 in Watkins Glen), but Arlo had his heart set on being in the original place, on the same date he performed there 50 years ago, and he wanted the event to be free to the public. Looks like he’ll be getting his wish.

I remember being bummed that I couldn’t attend the festival — New York was a world away for a high school student from Hawai’i. I wore out my “Alice’s Restaurant” album and loved the movie, and have seen him perform live several times in smaller venues. I’ll always remember something he said once about when he was growing up: his family would all sit around the dinner table every night and each of them would share what they did that day to make the world a better place. I so admire the Guthrie family’s principles and amazing musical legacy. At 71, Arlo continues to tour alone or with his family, stopping to relax in Hawai’i on occasion.

There will always be only one Woodstock. Despite all the characteristics of a disaster (bad weather, mud, logistical screw-ups, traffic nightmares, etc.), it’s mostly remembered as an event where half a million people gathered in the spirit of peace, love, and compassion in the midst of turbulent times. It certainly symbolizes something much bigger than itself — anything seemed possible then, and it gave people hope.

Enjoy this clip from the movie (stoned city):

Follow Arlo on FB for concert updates. I love that he writes his own posts (and he loves to take sunrise photos).

5. Hungry yet (silly question)? Today, we have hot dogs. How do you usually cook them — grill, fry, boil, steam, microwave? Although we don’t eat a lot of hot dogs, I enjoy them on occasion. It seems the right thing to do on July 4, for example.

Though grilling is our cooking method of choice, this Maverick HC-01 Hero Electric Hot Dog Steamer is awfully cute. Just fill the base with water and you can steam up to 6 hotdogs at a time in under 9 minutes. Auto shut-off guarantees you don’t overcook them, and best of all — when your dogs are done, the unit barks! 🙂

Includes a dishwasher safe food tray and measuring cup. I imagine you could steam other small items in there as well, like potstickers. Kids would probably go crazy over this thing. Fun gift idea. Hot diggity!

6. Speaking of food, I’ve always been interested in what goes on in the White House kitchens. I did a series of posts years ago on Presidential food and shared old photos of the WH kitchens and dining rooms. Though I’ve read a fair bit about what different Presidents liked to eat, etc., I know very little about the many African American cooks, stewards, and butlers who worked in presidential food service. Enter what looks like a fascinating book:

The President’s Kitchen Cabinet: The Story of the African Americans Who Have Fed Our First Families, from the Washingtons to the Obamas, by Adrian Miller (University of North Carolina Press, 2017).

James Beard award–winning author Adrian Miller vividly tells the stories of the African Americans who worked in the presidential food service as chefs, personal cooks, butlers, stewards,and servers for every First Family since George and Martha Washington. Miller brings together the names and words of more than 150 black men and women who played remarkable roles in unforgettable events in the nation’s history. Daisy McAfee Bonner, for example, FDR’s cook at his Warm Springs retreat, described the president’s final day on earth in 1945, when he was struck down just as his lunchtime cheese souffle emerged from the oven. Sorrowfully, but with a cook’s pride, she recalled, “He never ate that souffle, but it never fell until the minute he died.”

A treasury of information about cooking techniques and equipment, the book includes twenty recipes for which black chefs were celebrated. From Samuel Fraunces’s “onions done in the Brazilian way” for George Washington to Zephyr Wright’s popovers, beloved by LBJ’s family, Miller highlights African Americans’ contributions to our shared American foodways. Surveying the labor of enslaved people during the antebellum period and the gradual opening of employment after Emancipation, Miller highlights how food-related work slowly became professionalized and the important part African Americans played in that process. His chronicle of the daily table in the White House proclaims a fascinating new American story.

Sounds good, no? It’s gotten great reviews so far and is supposedly meticulously researched. About time the forgotten stories of the overlooked men and women who nourished and sustained our first families are being shared. Will be reading soon. Can’t wait!

7. Tea, tea, it’s always time for tea! If you’re looking for an extra special gift, check out these personalized children’s tea sets made by Holly Slay. 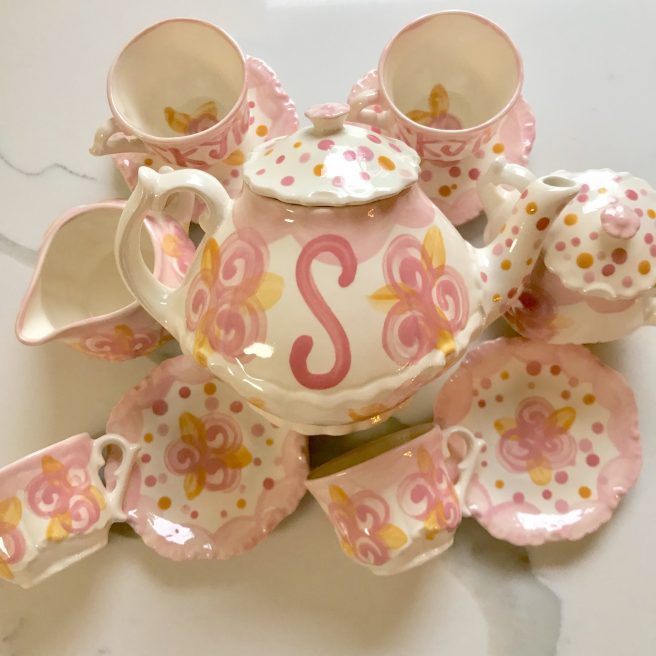 All pieces are hand painted using food-safe, dishwasher safe paints and glazes and fired in Holly’s kiln. Holly makes these to order — your choice of colors, design, and personalization. You can purchase extra tea cups to use as party favors if you like.

Perfect for little hands! {child sized tea cups are child-sized but not mini.} Teacups are 1.75″ tall and nicely hold 1.75 ounces of liquid. Saucers are 3.25″ in diameter. The child’s sized tea pots are 6.25″ from handle to spout and hold 12 ounces of liquid. Creamer is 2″ tall and sugar bowl is 3″ tall. 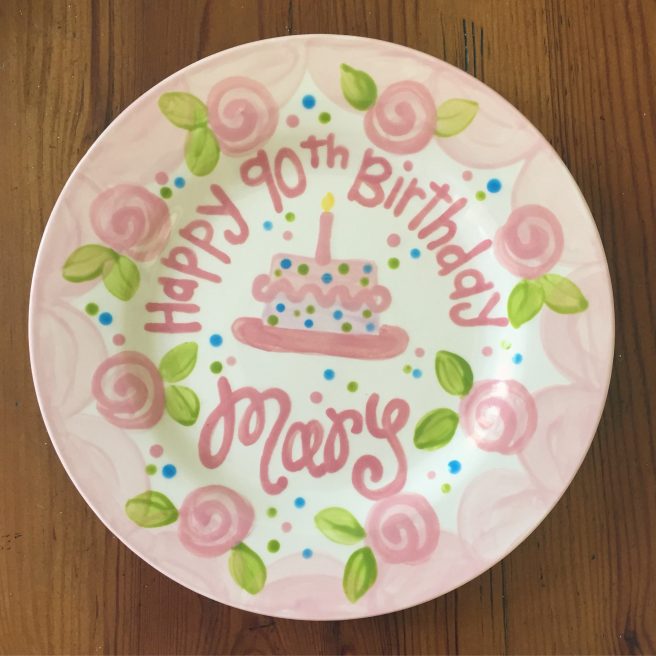 8. Let’s hear it for Girl Power! Perhaps you’ve read then 10-year-old Alice Paul Tapper’s New York Times Op-Ed back in October 2017, where she discussed being upset on a school field trip because “all the boys stood in the front and raised their hands while most of the girls politely stayed in the back and were quiet.”

She thought this was wrong and mentioned it to her Mom, a women’s rights advocate who had spoken to her about the ways women are often treated differently from men. They decided to bring up the issue with Alice’s Girl Scout troop, who agreed that they noticed the same thing, and that something should be done about it. Alice suggested they create a special Girl Scout patch, which they named the Raise Your Hand Patch. “Its message is that girls should have confidence, step up and become leaders by raising our hands.”

Girls Scout troops all over the country are now earning the patches and proudly wearing them on their vests and sashes.

When Alice Tapper noticed that the girls in her class weren’t participating as much as the boys, she knew she had to do something about it. With help from her Girl Scout troop and her parents, she came up with a patch that other girls could earn if they took a pledge to be more confident in school. Alice even wrote an op-ed about the experience for the New York Times! Inspired by that piece, this picture book illustrates her determination, bravery, and unwillingness to accept the status quo. With Marta Kissi’s delightful illustrations depicting Alice’s story, young readers everywhere will want to follow Alice’s lead and raise their hand!

In case you’re wondering, Alice is the daughter of CNN’s Jake Tapper, and was named after women’s rights activist Alice Paul. At age 11, she’s certainly doing her namesake proud. Way to go, Alice!

9. Many of you know how much I love the work of UK artist and illustrator Emily Sutton (we just featured her latest picture book, Ernestine’s Milky Way, written by Kerry Madden-Lunsford), and I had previously featured her work in this post.

In addition to her children’s books and personal painting and printmaking projects, Emily designs textiles and does illustration work for such clients as the V&A, Fortnum and Mason, and Bettys of Harrogate.

If you’re familiar with or have visited York, you know that Bettys Café Tea Rooms are a big deal — there are currently six locations in the area. For Bettys’s centenary this year, Emily created a special illustration featuring all six cafés on the same street.

Love how she blended all the different architectural styles! This elegant, classical design is featured on a variety of 100th Anniversary merchandise (teapot, mug, cake tin, tea caddy, etc.), and of course, as a diehard anglophile and fan of all things Yorkshire, I had to order a few items. Another nice way to “collect” Emily’s art. 🙂 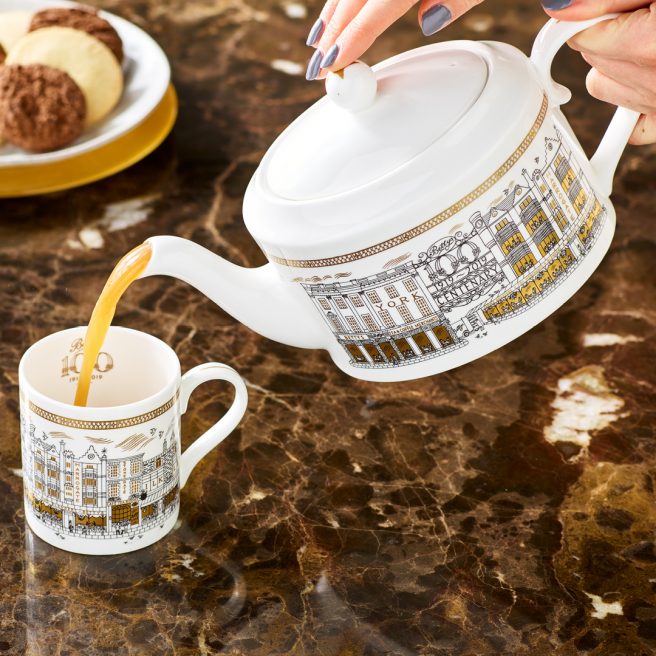 Visit the Bettys website to learn more about the history of the tea rooms, the various Centenary Events being held this year, and to check out the Bettys Special Edition Centenary Collection.

For our blue song, we’re staying in the Arlo spirit with a clip from the short-lived TV series he co-starred in, “Byrds in Paradise” (1994). Filmed in Hawai’i, the scenes I enjoyed most from this show were when Arlo played slack key guitar music with local artists. “Waimanalo Blues” was written by Liko Martin and Thor Wold, and was included on Arlo’s Power of Love album (1981). Other musicians in the video are (left to right): Charlie Kealoha, Robert Kekaula, and the late slack-key guitar master Cyril Pahinui.

19 thoughts on “nine cool things on a tuesday”