l. In celebration of Women’s History Month, here are a few portraits by the one and only Joan Baez, who turned 80 in January. I didn’t realize she was such an accomplished painter till I began following her on FB last year — initially for the music videos she posted as the pandemic raged on. It was wonderful seeing her singing in her kitchen!

Then she began sharing pieces from her first solo exhibition, “Mischief Makers,” featuring “risk-taking visionaries who have brought about social change through nonviolent action.”

Her debut album in 1960 was basically my introduction to folk music and activism. I shouldn’t be surprised, but I always marvel at multi-talented creatives who thrive on a cross fertilization of genres.

See more Mischief Makers as well as portraits of Friends and Icons at Joan Baez Art. I like all the little backstories for each painting. You can also purchase prints or catalogs there.

END_OF_DOCUMENT_TOKEN_TO_BE_REPLACED

“America is made of ordinary people capable of extraordinary things.” ~ Certified Bidenism 🙂

We soon see how this memorable refrain aptly characterizes his competitiveness and willingness to take the lead and carry the burden — whether playing a childhood game of pick-up football or diligently working on behalf of his constituents.

Reading this book is like sitting down with a good friend who’s sharing favorite family stories about someone she knows only too well. Kids have likely seen Joe Biden on TV; they know he’s running for President, and now, thanks to Jill, they have a chance to view this larger-than-life public figure in a more personal, relatable way.

We first meet Joey as an active 8-year-old, on the move and not the least bit intimidated by a group of older boys playing football. It didn’t matter that he was smaller than all of them, he taunted them anyway. When they couldn’t catch him, “they welcomed him into their game.” 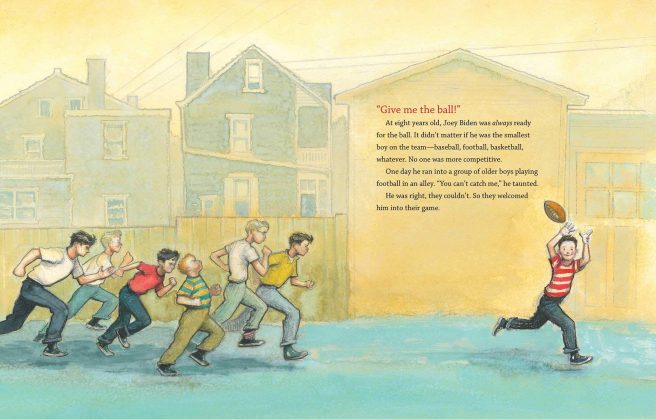 Joey had such great adventures with his best buddies, Charlie, Larry, and Tommy. Typical boys, everything was a competition. They went to the movies and reenacted their favorite scenes, romped through the neighborhood with Joey’s dogs, and visited the monkey at the candy store. But Joey was also a peacemaker who looked out for others, a natural leader who drew people together by focusing on what they had in common.

Did you know Joey could never refuse a dare? Risk taker extraordinaire, he once “climbed atop a mountain of still-burning coal,” “raced along the pipes high above a river,” and even “grabbed a heavy rope and swung over a construction site, imitating Tarzan — without a net.”

END_OF_DOCUMENT_TOKEN_TO_BE_REPLACED

Kamala Harris is precisely the vice presidential nominee we need at this particular moment in time. Being chosen to run alongside Joe Biden in the most consequential election of our nation’s history is a notable, glorious, glass-ceiling-shattering triumph.

Senator Harris hadn’t fully entered my radar until I  saw her grill Brett Kavanaugh in the Supreme Court Senate Confirmation Hearings in 2018. Wow! She was tough, articulate, whip smart, and definitely someone to watch. Early last year, I eagerly read her memoir, The Truths We Hold: An American Journey (Bodley Head, 2019), and was wholly inspired by her compassion, work ethic, professional accomplishments, and steadfast commitment to social justice and public service.

But then, everything about Kamala’s life story (her immigrant background, family history of political activism, impressive barrier-breaking, step-by-step rise in the ranks) suggests she was almost divinely destined to be the first African-American and first South Asian-American female candidate to run on a major party ticket during these turbulent times of systemic racism, economic inequities, public health crises, criminal injustices, and gender discrimination.

Thanks to Nikki Grimes’s succinct, artfully crafted free verse narrative, and Laura Freeman’s vibrantly gorgeous art, young people not only have an engaging overview of Harris’s life from birth to her withdrawal from the 2020 presidential nomination, but also an inspiring portrait of her character and true essence as a human being.

Grimes frames Kamala’s story as a conversation between a black mother and daughter. First grader Eve is upset because a boy in her class called her stupid for wanting to be President when she grows up. Eve’s mom says he’s wrong, and proceeds to tell her all about Kamala, a girl from right there in Oakland who hopes to be President one day.

Life is a story
you write day by day.
Kamala’s begins with a name
that means “lotus flower.”
See how her beautiful smile
opens wide, like petals
fanning across the water’s surface?
But you don’t see the flower’s roots. Her roots.
They grow deep, deep, deep down.
Let me show you.

Freeman’s beautiful double page spread provides a dramatic entrée into Kamala’s world, depicting her amidst pink lotus blossoms as a happy toddler, sensitive child, intent student, and an adult glowing with confidence. Grimes uses the floral/roots metaphor to great effect, as it prepares the ground for tracing the origins of Kamala’s ancestry, guiding principles and political aspirations. We sense this story will be an edifying blossoming, as we dig below the surface to learn how Kamala grew into the strong, determined leader, truth seeker, trail blazer, and role model she is today.

Young readers will especially appreciate the many pages devoted to Kamala’s early formative years: how her Jamaican father met and married her Indian mother in Berkeley before Kamala was born in Oakland, how they took her with them on civil rights marches, where she repeatedly heard words like “freedom,” “justice,” and “peace” even before she understood what they meant.

After her sister Maya came along, they enjoyed “faraway adventures together,/like visiting their grandparents in Zambia,” soon learning that “fighting for justice/ran in the family.”

END_OF_DOCUMENT_TOKEN_TO_BE_REPLACED

1. Isn’t it amazing how six months ago, face masks were the farthest thing from our minds, and now they’ve become an essential part of our daily lives? Such an important (and simple) way of showing care and respect for others.

No matter who you are, or what your tastes or needs may be, there’s a mask for you, from disposable surgical ones to different styles of fabric masks in every conceivable color and print, to those with funny pictures or sayings on them, to beautiful pieces of wearable art. With the right mask, you can even make a bold fashion or political statement. 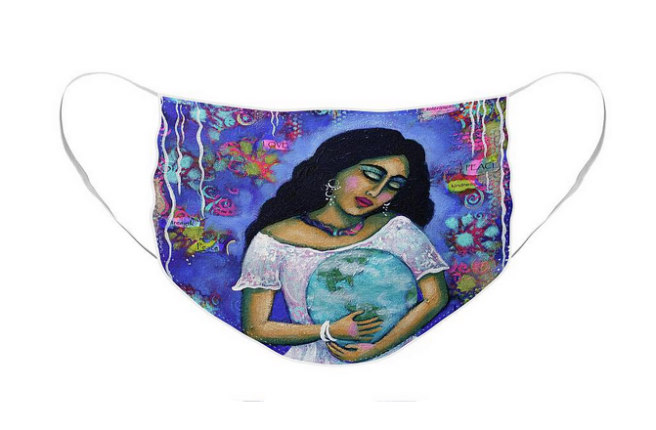 In the beautiful art category, behold these masks featuring the exquisite work of award winning painter, illustrator and teacher Carla Golembe. Been a Carla fan since she illustrated my third picture book, The Woman in the Moon (Little, Brown, 1995), and I can’t get enough of her color saturated jewel-tone pictures, which embrace spirituality, female empowerment, the wonders of nature, and stewardship of the planet Earth. Love the mystical, magical, mysterious quality of her images.

If you must wear a mask, why not feel beautiful while doing it? Think also of the pleasure you afford those who see you. And of course it’s always great to support indie artists whenever possible. Win-win!

Do check out Carla’s wonderful designs at Fine Art America — all can be purchased as face masks. Don’t be surprised if you turn heads wherever you go . . .

Learn about seven groundbreaking women in math and science in this gorgeously written biographical novel-in-verse, a companion to the “original and memorable” (Booklist, starred review) Finding Wonders: Three Girls Who Changed Science.

After a childhood spent looking up at the stars, Caroline Herschel was the first woman to discover a comet and to earn a salary for scientific research. Florence Nightingale was a trailblazing nurse whose work reformed hospitals and one of the founders of the field of medical statistics. The first female electrical engineer, Hertha Marks Ayrton registered twenty-six patents for her inventions.

Marie Tharp helped create the first map of the entire ocean floor, which helped scientists understand our subaquatic world and suggested how the continents shifted. A mathematical prodigy, Katherine Johnson calculated trajectories and launch windows for many NASA projects including the Apollo 11 mission. Edna Lee Paisano, a citizen of the Nez Perce Nation, was the first Native American to work full time for the Census Bureau, overseeing a large increase in American Indian and Alaskan Native representation. And Vera Rubin studied more than two hundred galaxies and found the first strong evidence for dark matter.

Told in vibrant, evocative poems, this stunning novel celebrates seven remarkable women who used math as their key to explore the mysteries of the universe and grew up to do innovative work that changed the world.

I’m ashamed to admit I was only familiar with two of the seven women included in this book — Florence Nightingale and Katherine Johnson. Thank goodness for Jeannine’s ongoing efforts celebrating the accomplishments of brilliant, fascinating, courageous, innovative women. Always a revelation to read about yet another female breaking gender stereotypes (yay for girl power!). And what better way to learn something new than by reading Jeannine’s exquisitely crafted verse? Of course, enough cannot be said about the importance of having strong female role models for today’s readers.

END_OF_DOCUMENT_TOKEN_TO_BE_REPLACED 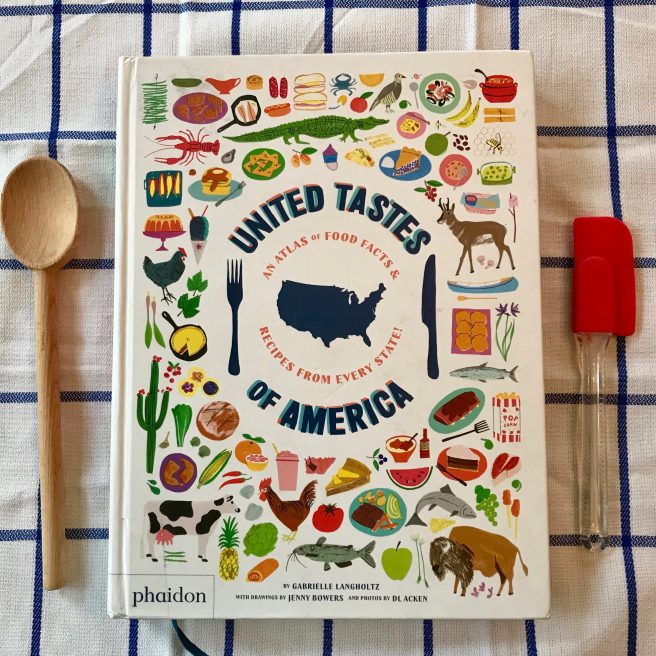 If you’re craving something savory, perhaps we should zip on over to Illinois for some deep dish pizza and pierogies. Something a little more substantial? Well, we could feast on chicken fried steak in Oklahoma and bison burgers in Wyoming, before topping everything off with a platter of Norwegian meatballs in South Dakota.

What’s for dessert? May I tempt you with a slice of St. Louis Gooey Butter Cake, Key Lime Pie from Florida, or some of South Carolina’s Buttermilk Pie? Oh, you want it all? Can’t say I’m surprised — I’d recognize your drool anywhere. 🙂

The good news is, we can sample all of these foods and lots more by simply digging into this new book, which takes us on a delicious culinary tour across the country — all 50 states + Washington, D.C. To sweeten the pot, we’re also invited to three U.S. territories: Guam, the Virgin Islands, and Puerto Rico!