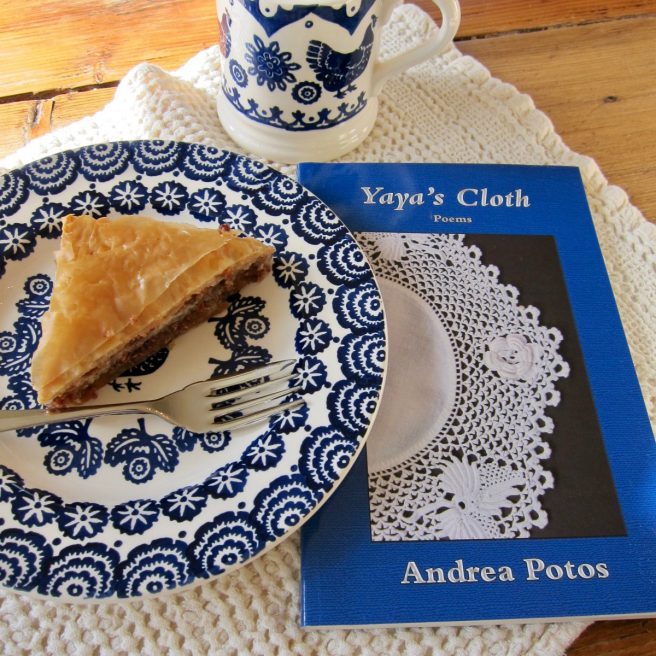 At this very moment, I’m sipping tea from a favorite mug, nibbling on baklava, and reading a fine book of poems: Yaya’s Cloth by Andrea Potos (Iris Press, 2007).

I’m loving Andrea’s family stories and the celebration of her Greek heritage. I appreciate the nod to domesticity and strong women — matriarchs who passed on their skills and knowledge to each succeeding generation.

Andrea had a very special relationship with her grandmother (Yaya). As I read Andrea’s lyrical depictions of their time together, I can picture them baking, chatting, and laughing in floured aprons, bonding over loaves of bread and batches of cookies. It is easy to feel the love.

Today, I’m honored to feature a poem from Yaya’s Cloth that I’m sure will whet your appetite for more. Andrea has graciously shared a bit of backstory as well as Yaya’s recipe for baklava. And special thanks to her for the wonderful personal photos. Yum!

END_OF_DOCUMENT_TOKEN_TO_BE_REPLACED

I’ve been an oatmeal-for-breakfast girl for quite some time. Sure, I dallied with cold cereal and Pop-Tarts® in my reckless youth, and even went through a yogurt, fruit, and granola phase. But now, I look forward to starting each day with a warm, comforting bowl of quick cooking oats.

When you live with more than a few bears (300+ and counting), you can’t help but channel Goldilocks. You bask in the fairy tale dimension of porridge, by now having perfected cooking time, addition of milk, maple syrup, berries and nuts to an enviable “just right.”

Some consider oatmeal bland and boring, ooey gooey pablum for the unimaginative. Fie on them, I say! Obviously they haven’t considered oatmeal’s poetic possibilities. Think of Galway Kinnell, who eats his oatmeal with charming companions like John Keats. And then there’s the inimitable Stephen Dobyns, whose tragicomic oatmeal fantasy reads like the magic porridge pot meets roguish Rodin. While some may sow their wild oats, others sculpt them. No time for mushy romance.

Love me, love my oatmeal. How will you shape your destiny?

This morning, because the snow swirled deep
around my house, I made oatmeal for breakfast.
At first it was too runny so I added more oatmeal,
then it grew too thick so I added water.
Soon I had a lot of oatmeal. The radio
was playing Spanish music and I became
passionate: soon I had four pots of oatmeal.
I put them aside and started a new batch.
Soon I had eight pots. When the oatmeal cooled,
I began to roll it with my hands, making
small shapes: pigs and souvenir ashtrays. Then
I made a foot, then another, then a leg. Soon
I’d made a woman out of oatmeal with freckles
and a cute nose and hair made from brown sugar
and naked except for a necklace of raisins.
She was five feet long and when she grew harder
I could move her arms and legs without them
falling off. But I didn’t touch her much –
she lay on the table – sometimes I’d touch her
with a spoon, sometimes I’d lick her in places
it wouldn’t show. She looks like you, although
her hair is darker, but the smile is like yours,
and the eyes, although hers are closed. You say:
what has this to do with me? And I should say:
I want to make more women from Cream of Wheat.
But enough of such fantasy. You ask me
why I don’t love you, why you can’t
live with me. What can I tell you? If I
can make a woman out of oatmeal, my friend,
what trouble could I make for you, a woman?

END_OF_DOCUMENT_TOKEN_TO_BE_REPLACED

1. “Be Kind” by Michael Blumenthal

3. TOO MANY TOMATOES by Eric Ode and Kent Culotta

4. “To Blueberries” by Adele Kenny

6. FRESH DELICIOUS: Poems from the Farmers’ Market by Irene Latham and Mique Moriuchi

7. MY VILLAGE: Rhymes from Around the World by Danielle Wright and Mique Moriuchi

9. MORE THAN ENOUGH by April Halprin Wayland and Katie Kath

11. Four Poems from WHEN GREEN BECOMES TOMATOES by Julie Fogliano and Julie Morstad

12. “On How to Pick and Eat Poems” by Phyllis Cole-Dai

14. THE LAST FIFTH GRADE OF EMERSON ELEMENTARY by Laura Shovan

15. A MOOSE BOOSH: A Few Choice Words About Food by Eric-Shabazz Larkin

18. Breakfast Poetry Buffet: “A Litany of Toast” by Cathy Lentes, “Breakfast” by Merrill Leffler, “The Life of Man” by Russell Edson, “Rendering” by Seth Bockley, “Imaginary Conversation” by Linda Pastan.

20. “For the Chocolate Tasters” by Diane Lockward

23. “The Self-Playing Instrument of Water” by Alice Oswald

24. SOMOS COMO LAS NUBES/WE ARE LIKE THE CLOUDS by Jorge Argueta and Alfonso Ruano

25. “Ode to Chocolate” by Lesléa Newman

26. MISS MUFFET, OR WHAT CAME AFTER by Marilyn Singer and David Litchfield

27. On Bob Dylan winning the Nobel Prize in Literature

28. NO FAIR! NO FAIR! by Calvin Trillin and Roz Chast

29. ARE YOU AN ECHO? THE LOST POEMS OF MISUZU KANEKO by David Jacobson, Sally Ito, Michiko Tsuboi, and Toshikado Hajiri

30. “Poetry is the Art of Not Succeeding” by Joe Salerno + Roundup

34. “Eating a Herd of Reindeer” by Kevin Pilkington, “Reindeer Report” by U.A. Fanthorpe

*A link to this archive can be found in the sidebar of this blog.

Will you be my Valentine?

According to my highly scientific research of the last 8 years, most writers claim chocolate inspires their best work. Is it all those mood altering chemicals creating an instant high (the same feeling we get when we fall in love)? Or maybe that pure, eyes-roll-back-in-the-head pleasure when a piece of velvety smooth chocolate brazenly yields to our body heat and melts in our mouths, ever-so-slowly releasing its deep, rich flavor? Yes, and Yes.

Whatever your pleasure — brownies, fudge, ganache, chip, bonbon, bark or bar — chocolate is the language of love. When it speaks, I listen. Chocolate gets my creative juices flowing, makes me fall in love with books, words, reading and writing all over again. I like having a little cacao in my corner, whispering, “You can do it!” 🙂

Today we’re serving up three delectable chocolate poems for your Valentine’s Day pleasure. Gary Hanna offers a bit of sweet seduction, Ed Zahniser rhapsodizes about his intense love for chocolate, while Rita Dove speaks the plain truth: when it comes to chocolate, it’s hopeless to resist.

END_OF_DOCUMENT_TOKEN_TO_BE_REPLACED

“The joys of the table belong equally to all ages, conditions, countries and times; they mix with all other pleasures, and remain the last to console us for their loss.” (Jean Anthelme Brillat-Savarin)

Talk about a kid in a candy store. As soon as my copy of Joys of the Table arrived, I polished my silver soup spoon, donned my nattiest bib (velvet trim, don’t you know), licked my chops, then ever so intently sipped, munched, chewed, relished and savored each and every poem in this tasty tome.

What a marvelous feast! The 100 or so poems (some with recipes) by 75 poets from around the country are served up in six courses: Amuse Bouche, What We Eat, Food and Love, Geography of Food, Kitchen Memories, and Food and Mortality. It was nice to see quite a few familiar favorites (Diane Lockward, Sharon Auberle, Barbara Crooker, Andrea Potos, Jacqueline Jules, Susan Rich, Annelies Zijderveld), as well as discover many new-to-me poets whose delicious verses left me craving more of their work (Lisa Kosow, Eric Forsbergh, Katharyn Howd Machan, Dianne Silvestri, Anne Meek, and Christie Grimes to name a few).

In a publisher’s interview, Editor Sally Zakariya was asked why she decided to put together an anthology of food poems:

I wondered that myself more than once! But really, food in its many aspects—personal, sentimental, sensual, universal—is a natural subject for poetry. I realized I had written a number of poems about remembered meals, nurturing cooks, and food as a symbol of communion and contentment, and I found that other poets I know had, too. And because food is so basic to our relationships with family and friends and lovers, I thought many poets would like to have such an anthology on their own shelves—and perhaps to give copies to their favorite cooks.

There certainly was no shortage of submissions — Sally received hundreds of additional poems worthy of being included — but ultimately her criteria for selection was subjective. I do like her taste in poems, noting that there was a higher percentage of poems that resonated with me in this anthology than in others.  END_OF_DOCUMENT_TOKEN_TO_BE_REPLACED