1. A monocle, a top hat, a mustache? Definitely the cat’s meow! Am loving Vickie Liu’s adorable donuts and cookies. Based in Melbourne, Australia, Vickie calls herself an amateur baker and professional eater. She started baking in high school and studied architecture and interior design in college. 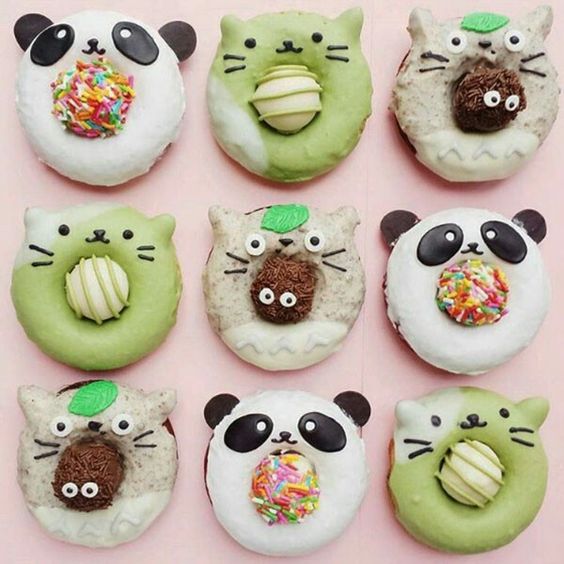 It was only after getting her degree that she was finally able to devote more time to indulging her passion for decorating sweets. She’s developed quite a following on Instagram and her future plans include launching a lifestyle blog and running a home bakery. Her creations fall into the category of “too cute to eat,” but I think I could be convinced. Yum.

2. Heads up, unpublished children’s book authors of color: check out the Roll of Thunder Publishing Contest sponsored by Penguin Random House in partnership with We Need Diverse Books.™

“In 1974, the Council on Interracial Books sponsored a writing contest seeking out diverse voices. Mildred D. Taylor was the winner of the African-American segment for the manuscript that became Song of the Trees (Dial, 1975), her first book. It introduced the Logan family and was followed by Roll of Thunder, Hear My Cry (1976), which won the Newbery Medal.

Submit your manuscript for a book about diversity for ages 8-14 and you could receive a publishing contract from Penguin Random House LLC!

NO PURCHASE NECESSARY. Enter between 12:01:01 AM Eastern Time on April 26, 2016 and 11:59:59 PM Eastern Time on June 21, 2016. Open to people of color (or those who self-identify as other than white) who are residents of the fifty United States, the District of Columbia and U.S. territories and possessions, aged 18 and older.

Judging will begin on or about June 28, 2016, and one winner will be chosen from the final group of ten (10) submissions narrowed down from all entries received. Entries will be judged based on (i) overall storytelling; (ii) creativity; (iii) originality; and (iv) writing ability, with equal weight given to each criterion.”

A gorgeously written novel in verse about three girls in three different time periods who grew up to become groundbreaking scientists.

Maria Merian was sure that caterpillars were not wicked things born from mud, as most people of her time believed. Through careful observation she discovered the truth about metamorphosis and documented her findings in gorgeous paintings of the life cycles of insects.

More than a century later, Mary Anning helped her father collect stone sea creatures from the cliffs in southwest England. To him they were merely a source of income, but to Mary they held a stronger fascination. Intrepid and patient, she eventually discovered fossils that would change people’s vision of the past.

Across the ocean, Maria Mitchell helped her mapmaker father in the whaling village of Nantucket. At night they explored the starry sky through his telescope. Maria longed to discover a new comet—and after years of studying the night sky, she finally did.

Told in vibrant, evocative poems, this stunning novel celebrates the joy of discovery and finding wonder in the world around us.

I’m a huge Jeannine fan in general and loved Borrowed Names to pieces, so I’m really excited to read Finding Wonders. Her books are meticulously researched and she is brilliant at excavating and fashioning telling detail to masterful effect, giving the reader an intimate, uniquely nuanced view of her subject(s). She has such a beautiful way of crafting words, whether poetry or prose. Don’t miss this one!

END_OF_DOCUMENT_TOKEN_TO_BE_REPLACED

Grab your shopping baskets and bags, let’s go to the Farmers’ Market!

In Fresh Delicious (Wordsong, 2016), Irene Latham and Mique Moriuchi invite us to join a group of adorable animal friends as they celebrate the wonders of farm fresh fruits and veggies. This mostly free verse smorgasbord of 21 poems is chock full of mouthwatering sensory details, clever imagery and playful metaphors to whet the appetite and tease the imagination. 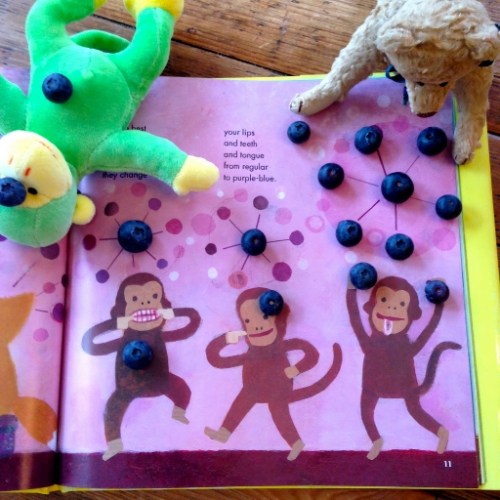 While nibbling on these whimsical poems, curious munchkins will meet basil (“a bouquet of minty green butterfly wings”), delight in how ears of corn listen to the sun, and consider that okra is really “a mountain of mouse-sized swords/stored in fuzzy sheaths.” Afterwards, they’ll likely be anxious to see, smell, touch and taste the produce in person, making up little scenarios so they can write their own poems. 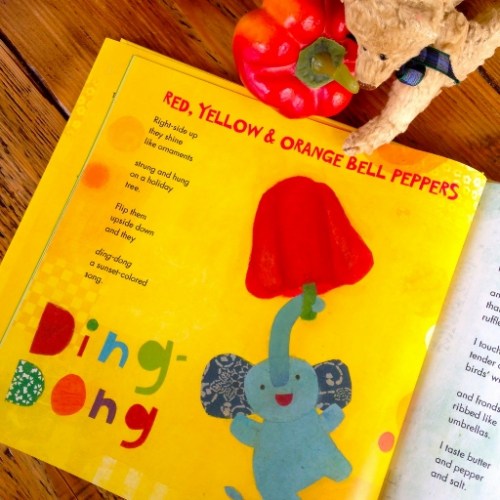 Does crookneck squash really look like a question mark? How is zucchini like an exclamation point? Will wild honey really make our tongues “buzz with pleasure”? Can’t wait for summer, when it’ll be time to propel those seeds out of our mouths “like shooting stars.”

END_OF_DOCUMENT_TOKEN_TO_BE_REPLACED

The artichoke keeps her distance.
She has been taken too many times. Now
the armadillo armor hides her secret heart.

Everyone counts on the onion, staple of stews
and pottage. But deep in the crowded bin, her skin
is thin as moth wing. It peels away before their eyes.

Green peppers are modern women who take
their muscles seriously. They hunch their shoulders,
broad, shiny beneath a fluorescent sun.

Close by in cellophane the carrots keep for weeks,
the last to lose their figures. All legs,
tapering to slim ankles–and above,

wild profusion of hair. They gather in knots
of conversation and whisper about the apples,
those aging showgirls who didn’t know when to quit,

redheads buffed an unnatural blush, a shine
that shouts forever while inside the white flesh softens.
In the center aisle, bananas in bunches

curl like firm young girls in sleep. Soon they will turn
like their half-price sisters, learn the bruise,
dark print that begins beneath the skin and grows.

Oh to be the avocado! She ages so well.
Time makes love to her daily, finding her sweeter
the softer she grows. Beside her the potato,

peasant woman in brown, comes into her own slowly.
She stays in the shadows, blindly remembers
her place. Come to me! I will make you whole!

~ Posted by permission of the author, copyright © 1989 Rebecca McClanahan, from Mrs. Houdini (UP of Florida).

Well, grocery shopping will never be the same. I mean, who knew? 🙂

Love the whimsy in this poem, but also the relatable truths. What lies beneath, when you peel away the layers? Many of us are simply not what we seem. Since the items described here are all female, do you think women conceal more of their true selves than men do? And what interesting statements about aging — for sure, I’d like to be an avocado.

I can think of someone I know in real life who matches each of these fruit and vegetable personality types. Which do you most identify with?

While you’re contemplating that, enjoy this little gallery of reimagined fresh produce: 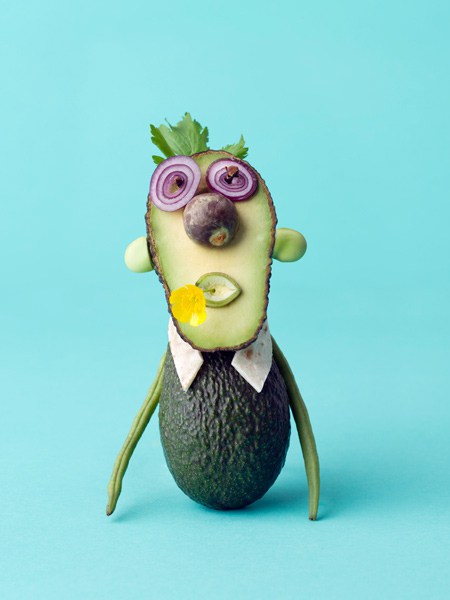 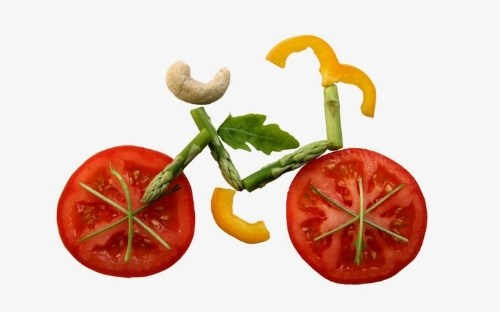 Rebecca McClanahan’s tenth book is THE TRIBAL KNOT,: A MEMOIR OF FAMILY, COMMUNITY, AND A CENTURY OF CHANGE. She has also published five books of poetry and a suite of essays, THE RIDDLE SONG AND OTHER REMEMBERINGS, winner of the Glasgow prize in nonfiction. Her three books of writing instruction include WORD PAINTING: A GUIDE TO WRITING MORE DESCRIPTIVELY, which is used as a text in numerous writing programs. For more, check out her official website.

Big Congratulations to Diane DeCillis! Her debut poetry book, STRINGS ATTACHED, was just named a 2015 Michigan Notable Book! Hers was one of 20 books selected for this honor by the Library of Michigan and the Michigan Department of Education. You may remember when I shared “Music from Another Room” and “Last Night I Dreamed I Stole the Croissants” from this book as well as Diane’s hummus recipe. If you still haven’t seen STRINGS ATTACHED, treat yourself to a copy to celebrate the New Year. It’s a rich, sumptuous feast of words, impressions, and ideas sure to satisfy your literary palate.

The lovely and talented Irene Latham is hosting the Roundup at Live Your Poem. Is she an onion or an orange? Stroll over to peruse the full menu of poetic goodies being served up in the blogosphere this week. If you go grocery shopping this weekend, be sure to pay close attention to the tomatoes. 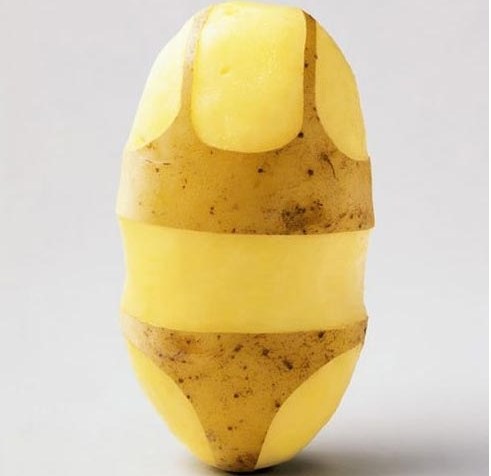 While looking for more children’s books illustrated by Lena Anderson, I was happy to discover Anna’s Garden Songs — a whimsical, light-hearted collection of 14 fruit and veggie poems written by Mary Q. Steele.

Garden favorites like peas, potatoes, tomatoes, lettuce, cabbage, beets and onions take their place in the sun with playful rhyming verse and Lena’s fanciful pictures. I may as well confess right now that I’ve always had a thing for giant vegetables, so when I saw how Lena fiddled with scale in this book I squealed with delight. 🙂

Blond, mostly barefoot, bespectacled Anna is just adorable as she plants, harvests and shares the garden’s bounty with her friends, grandfather, and large pet rabbit, who happily scampers through the pages and almost steals the show (he’s especially good at nibbling and napping).

From the moment I opened the book and saw Anna hiding in that big pea pod, I knew I was in for a real treat. I can’t decide which I like most — Anna sitting atop a giant beet, relaxing amongst the tomato plants, or wearing a dress made from lettuce leaves.

END_OF_DOCUMENT_TOKEN_TO_BE_REPLACED 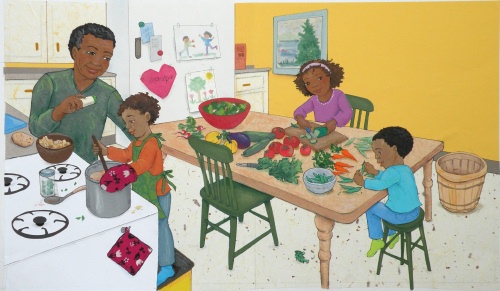 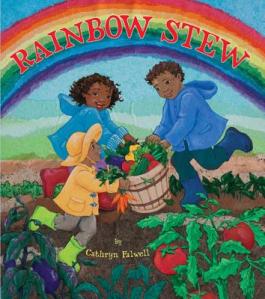 A very cool grandfather (who makes yummy pancakes for breakfast) makes the most of a rainy summer day by suggesting everyone go outside to “find some colors for my famous Rainbow Stew!”  So he and his three grandchildren don their rain gear and go searching for ripe veggies under the drippy leaves. With treasures like radishes, carrots, cucumbers and cabbage, and time enough to “jump around like grasshoppers and buzz about like bees,” everyone has a muddy grand time.

END_OF_DOCUMENT_TOKEN_TO_BE_REPLACED 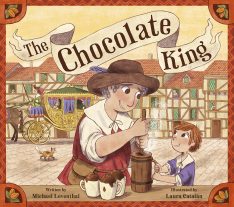