Pardon me, but whenever I see the word “clerihew” I think somebody’s just sneezed. Either that, or I picture a shell-shaped danish pastry or a new fangled brass musical instrument.

But all you poetry aficionados know very well that a clerihew is a cheeky four-line rhyming poem invented back in the late 19th century. Its sole purpose? To make fun of a famous person. In case you’re looking to liven up your President’s Day celebration on February 16, better check out Bob Raczka’s new book, Presidential Misadventures: Poems That Poke Fun at the Man in Charge (Roaring Brook Press, 2015). 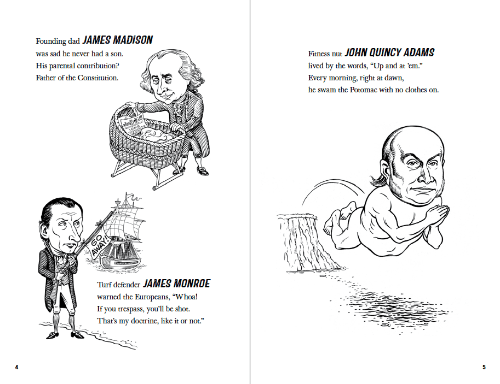 In keeping with the clerihew’s rules, the first lines of these poems end with the person’s name, and I like Raczka’s spot-on descriptions: “Toothache-prone George Washington,” “Fashion-conscious Chester Arthur,” “Electric-shock victim Benjamin Harrison,” “Fresca fanatic LBJ,” “Cover-upper Richard Nixon.” Best zinger of all? “Relaxer-in-chief George W. Bush.” Did you know he took more than 900 days of vacation while in office? 😀

END_OF_DOCUMENT_TOKEN_TO_BE_REPLACED

“He who chases his own tail has a full circle moment.” ~ Issa Shih Tzu

I’ve got my nose in the best book!

Why Do I Chase Thee: Classic Poetry for Dogs from Elizabeth Basset Browning and Other Canine Masters by Jessica Swaim and Chet Phillips is tail-waggin’ brilliant and totally blows my ears back. Can you dig it?

Finally, finally, dogs have their day and their say. For far too long, silly humans have discounted their random bow wows, arfs, woofs, yips, and yaps. Here’s proof that some of these mutts were actually sniffing out sonnets and licking limericks with the best of them.

Make no bones about it, this snappy little volume features sixteen of the most celebrated poetic pooches of all time, including four-time Poolitzer Prize winner Rover Frost, iambic puptameter whizzard William Shakespaw, haiku master Issa Shih Tzu, and the somewhat repentant Dogden Dash, who knows just what to do with a rhymed puplet:

Judging by their ankles, here’s my educated guess:
The FedEx man tastes better than the guy from UPS.

END_OF_DOCUMENT_TOKEN_TO_BE_REPLACED 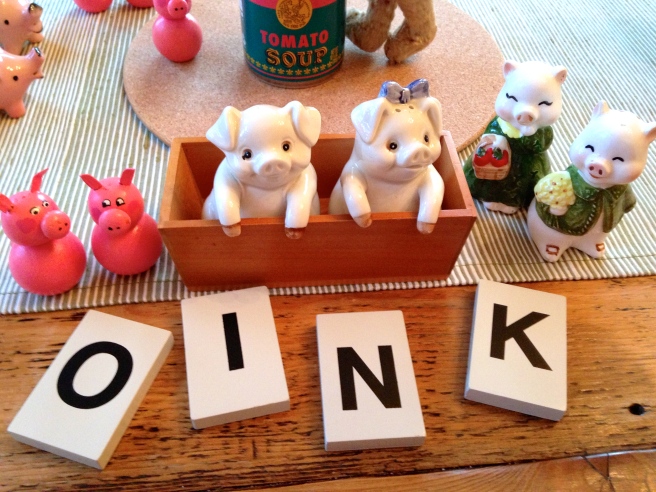 Gather round, ye swines, sows, piglets and poetry-loving porkers. We’re mud-wallowingly happy to squeal your praises today. Surely none other in the animal kingdom is as clean, intelligent, belly beautiful or lick-the-fat-off-your-face tasty!

Where would we be without our Sunday morning slices of crispy bacon, our juicy honey-baked Easter ham, our Wednesday night pan-fried pork chops with biscuits and gravy, our fall-off-the-bone bourbon-glazed baby back ribs? Oh, tempt me with your tenderloin, your coy cutlets, your heavenly hocks! Whether sausage, shoulder or bountiful butt, you alone wear the Crown.

To barbecue or not to barbecue — that’s not even a question. Aye, there’s the dry rub.

END_OF_DOCUMENT_TOKEN_TO_BE_REPLACED

“Love me like a wrong turn on a bad road late at night.” ~ Kim Addonizio

Sit up straight, fasten your seat belts and brace yourselves.

Today’s poem is some kind of wild ride. It may amuse, even shock you. One thing for certain, you won’t be quite the same after reading it.

Kim Addonizio’s poems have a way of doing that to people. Unflinching, street-smart, and gritty, she addresses the reader directly and tells us just what we need to know. In this case, a lesson in manners. How else to navigate your way through a world gone mad?

unless they drift slowly into your lane

as you aim for the exit ramp.

or anyone you once let get past second base

and later wished would be sucked into a sinkhole.

Yelling obscenities at the TV is okay,

as long as sports are clearly visible on the screen,

but it’s rude to mutter at the cleaning products in Safeway.

Therefore, sentiments such as “I went balls to the walls for her”

Love her sardonic wit. It feels good to be roused from a pablum-induced coma once in awhile.

♥ The beets-and-popcorn-loving Sara Lewis Holmes at Read*Write*Believe is this week’s Roundup host. Be on your best behavior when you visit her blog, and remember not to interrupt if she is, by chance, eating roast chicken.

♥ Other Kim Addonizio poems featured on this blog:

“What Do Women Want?”

You know what to do.

**photo of Kim by Solnabanya/flickr

Funny how certain poems stay with you forever, even if you don’t want them to.  You can say to them, “Go away, I have so much on my mind.” You can purposely read other poems, hoping the new lines will cancel out the old ones. But no, these certain poems just give you the raspberry,clinging to your memory like a tick high on super glue.

I’ve been thinking that maybe these stubborn barnacle-like poems are the ones we’ve been forced to memorize under duress.

The poem in question is “For I Had But Fifty Cents.”  The duress:  Mrs. Ishimoto’s tenth grade public speaking class. The assignment: humorous interpretation. I combed through poetry anthologies until I came across this seemingly innocuous poem. It said the author was “anonymous.”  And it was funny.

So, foolishly, I memorized it. To fulfill the “interpretation” part of the assignment, I decided to deliver it in a Southern accent.  My only exposure to Southern accents at the time was “The Beverly HIllbillies.” So I channeled Granny Clampett.

Have you ever seen a short, bespectacled, shy Korean girl do Granny Clampett?

(If you need to take an aspirin to continue, I’ll wait.)

But to give myself some credit, I gave it everything I had:  total character immersion, slightly spastic, but entirely original arm gesticulation, and facial expressions resembling chronic constipation, all the time maintaining that all-important eye contact with the audience.

In short, I was a hit. The audience exploded, and Mrs. Ishimoto gave me an “A.”

This sweet smell of success, coupled with a simple short circuit in my brain, resulted in “For I Had But Fifty Cents” becoming part of my DNA.  I was doomed, I tell you, doomed.

Imagine my surprise when last week I googled this “poem” and discovered it was actually a song!!
Lyrics by Billy Mortimer, melody by Dan Lewis, and published in 1881.

And, there was a YouTube video of some guy singing it!!

If only I had known! I love music. I could have learned to play the guitar and moved to Nashville. I already had the Southern accent nailed. I totally missed my calling. Now that’s what I call duress.

WARNING:  DO NOT READ THE FOLLOWING POEM, and whatever you do, don’t ever get it into your silly head that you’d ever want to sing the dang thing.

FOR I HAD BUT FIFTY CENTS

I took my girl to a fancy ball;
It was a social hop;
We waited till the folks got out,
And the music it did stop.
Then to a restaurant we went,
The best one on the street;
She said she wasn’t hungry,
But this is what she eat:

A dozen raw, a plate of slaw,
A chicken and a roast,
Some applesass and sparagass,
And soft-shell crabs on toast.
A big box stew, and crackers too;
Her appetite was immense!
When she called for pie,
I thought I’d die,
For I had but fifty cents.

END_OF_DOCUMENT_TOKEN_TO_BE_REPLACED

“Cyclamen and Fruit” by Emma Williams