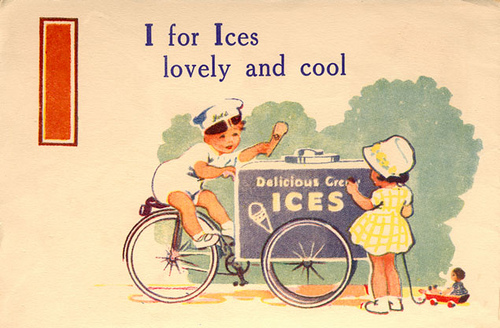 They say vanilla is America’s favorite flavor, followed by chocolate. I’ll take one of each, please, and while you’re at it, I wouldn’t mind a scoop or two of cherry amaretto, chocolate fudge brownie, spumoni, mint chocolate chip, and pralines and cream. ☺

The best thing about ice cream is that no matter how old you get, with those first few licks you’re a child again, and all the same rules apply — lick around the edge of your scoop so it doesn’t drip, don’t take too big a bite or you’ll get brain freeze, don’t lick too hard or your ice cream might fall off, and never bite the tip of your cone when there’s ice cream still in it.

Did you know that more ice cream is sold on Sunday than on any other day of the week? In Hawai’i, there was no such thing as eating ice cream mostly during the summer — it was a year-round treat we milked to the hilt: Dilly Bars from Dairy Queen, strawberry sundae ice cream cups at birthday parties, Creamsicles from the local sweet shop, small scoops of vanilla with shave ice, and of course all those other favorites we begged our mom for at the grocery store: Milk Nickel, Drumsticks, Fudgsicles, and don’t let me forget ice cream sandwiches! *licks lips*

While I drift away in my ice cream reverie, taste this sampler of ice cream picture books. Just for you, seven big scoops — a mix of fiction and nonfiction: read about how ice cream is made and who invented the first cone, then meet a few lovable characters with creamy cool adventures all their own. Quick, before it melts! 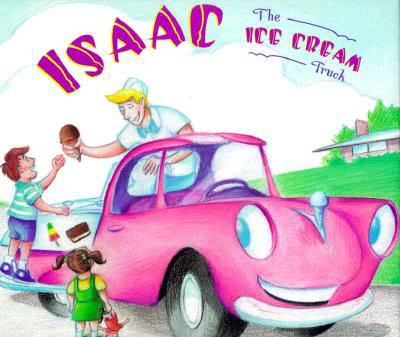 ISAAC THE ICE CREAM TRUCK by Scott Santoro (Henry Holt, 1999).  Everybody loves Isaac the Ice Cream Truck, as he winds his way through the neighborhood, singing his cheery song and bringing lots of favorite treats. But Isaac is actually sad. When he compares himself to some of the other trucks, he feels small and unimportant. The giant crane, car transporter, moving van, street cleaner and bulldozer all have big jobs, but all Isaac does is sell ice cream. When Isaac watches some fire trucks put out a big fire, he decides they’re probably the most important trucks of all. How he envies them! But what a surprise when he realizes how glad the firefighters are to see him. He may be small, but he can do something they can’t. This sweet tale about self acceptance, with its winsome colored pencil illustrations, will especially appeal to pint-sized truck lovers. Includes full music and lyrics for “Isaac’s Song.”

CURIOUS GEORGE AND THE ICE CREAM SURPRISE by Monica Perez, illustrated in the style of H.A. Rey by Mary O’Keefe Young (Houghton Mifflin Harcourt, 2011). There’s no stopping this mischievous little monkey! In this latest title in the popular series, George hears an ice cream truck one summer day and longs to catch up with it. 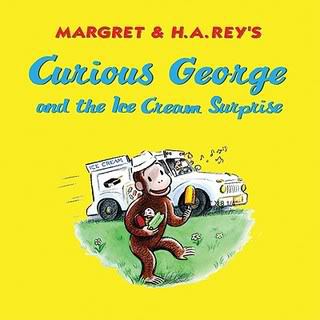 Eating a vanilla, strawberry or chocolate ice cream bar would be the perfect way to cool off, but the truck doesn’t return to his street. He and the man with the yellow hat try to cool off in other ways, but the swimming pool is closed, the sprinklers in the park are turned off, and their freezer breaks — no ice for lemonade. Finally the truck returns, but drives right by George, who finally catches it by swinging through a few trees. What happens when the ice cream man leaves to get some change? George hops into the truck and gives everyone free ice cream. Uh-oh, the ice cream man is upset. But somehow, things always work out for this well-intentioned rascal.

ICE-CREAM CONES FOR SALE! by Elaine Greenstein (Arthur A. Levine Books, 2003).  With much aplomb, Greenstein explores the controversy surrounding the invention of the first ice cream cone. Though credit now goes to Italo Marchiony, who sold ice cream from his pushcart on the streets of NYC, at least five men and a woman at the 1904  St. Louis World Fair claimed it was their idea. Young Arnold Fornachou ran out of ice cream dishes and asked Ernest Hamwi at the next stand to make some waffles, which he rolled into cones. But Ernest claims he offered those warm waffle cookies to Arnold first.

Well, some claim it was actually Abe Doumar’s idea, and it was he who told Ernest about it. Then there was David Avayou, who claims he got the idea from the fancy paper cones he saw in France on his way to St. Louis. Finally, there was Charles Menches, who gave his lady friend flowers and an ice cream sandwich, which she conveniently rearranged. This sweet mystery, a toothsome bit of American history, is illustrated in charming monoprints overpainted with gouache. Love the turn-of-the-century garb, complete with a variety of moustaches and many fetching hats. Great Author’s Note with bibliography included.

ICE CREAM by Elisha Cooper (Greenwillow Books, 2002). An engaging summary of how ice cream is made from cow to carton. Cooper’s minimalist pencil and watercolor illustrations, so clean and uncluttered, subtly clarify each step in the fascinating process, allowing the lively, appeal-to-all-senses text to take center stage. Many details are brought to life with great sound effects: “the FUMP, FUMP of the suction cups; the CHUG, CHUG, CHUG of milk spurting through plastic tubes, the WHISH of suction released . . . ”

There are great descriptions of the machines in the factory (“a steel, piston-pumping, cream-dripping, gadget-whirring, water-spraying, pipe-rattling, chocolate-leaking animal”), as well as the scientists, tasters, and recipe makers who work there. Those who expect a ho-hum nonfiction treatment will likely be surprised at this delectable account, marked by lines of text that arch, swerve and circle the page, unexpected humor, and a helpful glossary at the end. Cooper’s palette emotes “green” and “organic.”

ICE CREAM LARRY by Daniel Pinkwater, illustrated by Jill Pinkwater (Marshall Cavendish, 1999). Larry, the inimitable polar bear who lives in a hotel named after him, falls asleep in the walk-in freezer of a local ice cream shop. He just wants to cool off, but it seems that during his “nap,” he somehow consumes two hundred and fifty pounds of ice cream. Naturally Mrs. Cohen of  Cohen’s Cones is a tad disturbed. 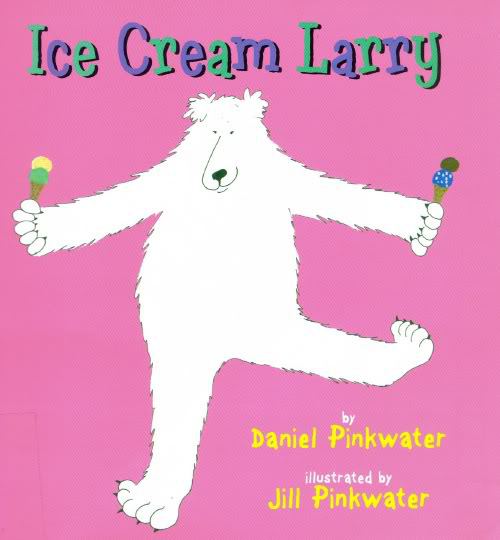 Larry’s young friend and narrator of this toothsome tale comes to his defense: “I don’t see how you can let a bear into your freezer and not expect him to eat ice cream.” She’s definitely got a point. After Larry gets impressive press coverage, he inks a cool deal with the Iceberg Ice-Cream Company, and before you know it, Larry Bars are everywhere — vanilla, chocolate, strawberry, blueberry, arctic almond, bearberry, polar pineapple and codfish. They’re a huge hit all over the world, and Larry gets his very own walk-in freezer and 50 Larry Bars a day. Can’t beat Pinkwater’s quirky, droll humor paired with his wife Jill’s sublimely arresting illos. Bearrific!! **voted top ice cream picture book by Cornelius and his staff of furry kitchen helpers.

ICE CREAM: The Full Scoop by Gail Gibbons (Holiday House, 2006). A wholly delightful, beautifully produced book by a veteran author/illustrator who always gets it just right. A brief intro set in an ice cream parlour is followed by notable moments in ice cream history (speculated Chinese origins, Marco Polo’s recipes, European chefs, and the British bringing the treat to America). Did you know Nancy Johnson from New Jersey invented the first ice-cream freezer in 1841? What happened at ice cream socials? Would you like a tour of an ice cream factory? It’s all vividly illustrated in ink and watercolor, and features lots of people blissing out on many varieties: ice cream sandwiches, sodas, sundaes, banana splits, bars, cakes, and with a nice piece of pie. End notes include nine more scoops: infobits sure to send you chasing after the next ice cream truck. Total yum!

If, by now, you are not desperately craving a dish of rich homemade ice cream or a double scoop cone or maybe even a banana split, there is something seriously wrong with you. What are you waiting for? Read these books and EAT!!

Do you know of any other cool ice cream books?

10 thoughts on “the scoop on ice cream picture books”