Look what’s being released this Saturday, May 30th!!

I’ve been anxious to read this picture book biography of Chinese American actress, Anna May Wong, ever since I first heard about it in Tarie’s interview with author Paula Yoo at Into the Wardrobe. When I told the nice folks at Lee & Low that I wanted to review it during Asian Pacific American Heritage Month, they sent me a review copy lickety split.

Growing up, I had heard my parents and relatives mention Anna May Wong, and I may have even seen some of her movies. But I never knew much about the details of her life and the struggles she had to overcome as the first Chinese American actress, and the first internationally acclaimed Asian American actress.

Paula Yoo has written a fascinating, inspiring, thoroughly engaging account of Anna’s life, beginning with her childhood in Los Angeles’ Chinatown, to her return to Hollywood in the 1930’s after visiting China, when she vowed never to “play again in a film which shows the Chinese in an unsympathetic light.”

The book opens with nine-year-old Anna May tied to the railroad tracks, struggling to free herself from the path of an oncoming train. She’s not really in danger, but daydreaming about being a damsel in distress. 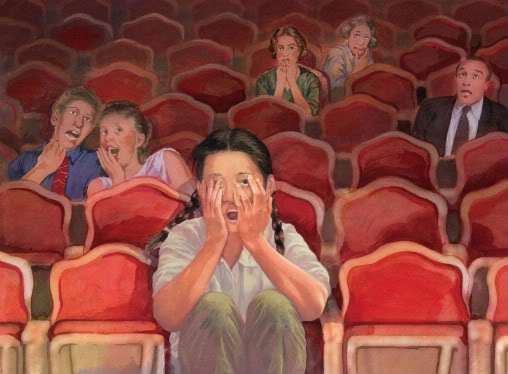 “There was nothing Anna May enjoyed more than sneaking away to the cinema.”

Her vivid imagination and love for cinema certainly made her humdrum, tedious life, toiling in her family’s laundry, somewhat bearable. Every chance she got, she saved her pennies to escape to the movies, where exciting and glamorous stories also helped her forget about the teasing she was forced to endure in a predominantly white school.

One day, she saw a movie being filmed right in her own neighborhood. She soon began to skip school regularly to watch and ask questions about filmmaking, eventually earning the nickname, “Curious Chinese Child.” She decided then and there to become an actress, reenacting scenes and practicing different emotions in front of the mirror in her bedroom, much to her parents’ dismay.

Despite being punished and forbidden to cut school, Anna May never gave up her dream and secretly visited movie sets whenever she could. She begged her father to allow her to audition, and won a part as an extra. This led to more roles, but she was always typecast as a “China Doll” or a “Dragon Lady.” She was also frustrated that people of color were not allowed to kiss their white co-stars on-screen, and that Chinese women were always portrayed in demeaning, negative ways.

“Anna May won her first big role in Bits of Life, a 1921 movie starring Lon Chaney as a Chinese man named Chin Chow. She played his wife, Toy Sing.”

“The yellowface makeup disturbed Anna May. Her father had always told her to be proud of her race, but the ugly makeup made her feel ashamed.”

Quite the fashion icon, with her stylish 1920’s bob and flapper fashions, she eventually became so disillusioned with Hollywood, that she went to Europe, where she became an overnight success in “Piccadilly” (1929). She had achieved her dream of international stardom, but when she returned to Hollywood, she lost a major role in “The Good Earth” to a white actress wearing “yellowface” makeup.

Heartbroken, devastated, and feeling unwelcome in her own country, Anna May left for China, where she spent time with her family and immersed herself in the culture. This experience led to her decision to honor her heritage “by fighting for more authentic images of Asians on-screen.”

“She learned how much her father had sacrificed so their family could have a better life in America.”

Yoo’s well paced, seamless narrative informs with just the right amount of interesting detail and pathos. While examining the notion of “cultural stereotype,” which hinges on fear, suspicion, ignorance, and misconception, Yoo also emphasizes how Wong struggled on many fronts — pursuing her career despite parental objection, accepting demeaning roles in order to make a living, and coming to terms with her own identity, i.e., feeling “torn between my race and my American homeland.”

Misconceptions tend to linger for no good reason, and as Yoo states in her Author’s Note, it’s only been in recent years that film scholars and fans, long critical of Wong’s stereotypical portrayals of Asian characters, have finally realized the degree to which she struggled against discrimination and how she crusaded to effect change. They now praise the sympathy and humanity she brought to her limited roles. 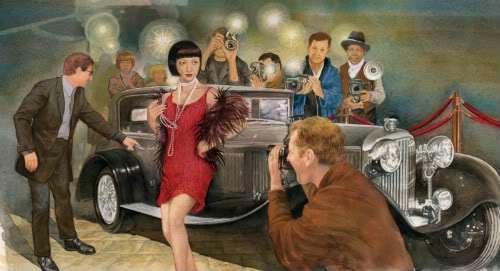 Lin Wang, a classically trained portrait artist, has brought this compelling narrative to life with luminous, ravishing watercolor and acrylic illos. The spreads are lush and rich, echoing the grandeur of movie sets. The likeness to the real Anna May is startling and mesmerizing; she is often clad in intensely emotional tones of deep red, plum, orchid, or pumpkin, and the last spread of her sitting at a table with her striped jacket and floral hat is simply gorgeous.

Shining Star is geared for older picture book readers, who, though probably unfamiliar with Wong, will be inspired by her fierce determination in pursuing an acting career at a time when discrimination was rampant, and even going on to crusade for more authentic portrayals of Asians in films. Like Paula Yoo’s excellent PB biography of Sammy Lee, Sixteen Years in Sixteen Seconds (which I reviewed here), this one is a must-have for home and library collections.

Check out the publisher’s website for a video interview with Paula Yoo, more reviews and spreads from the book.

Paula Yoo’s website is here, and you can see more of Lin Wang’s exquisite art at her website.

The Nonfiction Monday Roundup is at The Miss Rumphius Effect.

14 thoughts on “Shining Star: The Anna May Wong Story by Paula Yoo”