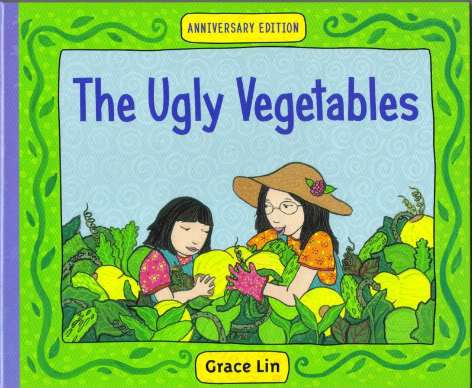 Could it be a delicious soup made with Chinese spinach and bitter melon? 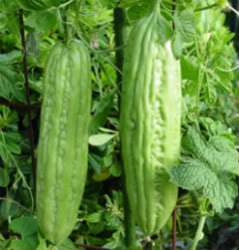 It’s so intoxicating that I have a sudden urge to close my eyes, take a deep breath, and smell the sky. AH! It’s simply magical — I definitely want to eat that smell!

Last week, when I posted a list of my favorite gardening picture books, I purposely left one title out, because I wanted to feature it in a post of its own. It’s such a timeless, savory story that its nourishing goodness has already been enjoyed by millions of hungry readers.

You may know that the 10th Anniversary Commemorative Edition of Grace Lin’s The Ugly Vegetables was released this past spring. This was Grace’s first published picture book — a charming gem that never loses its freshness and appeal with its enduring themes of diversity, acceptance and community. The Anniversary Edition has new cover art and an updated glossary that makes it easier to pronounce the names of all the Chinese vegetables used in the famous Ugly Vegetable Soup recipe.

Each time I read The Ugly Vegetables, I feel the little girl’s anticipation and excitement as she and her mother turn the soil and plant their seeds. But she’s sad and disappointed when she realizes all their neighbors are growing colorful, pretty flowers, while they’re growing funny looking, bumpy, decidedly and undeniably ugly vegetables.

Then comes my favorite part: the girl and her mother harvest the vegetables, and while the girl is outside playing, she begins to smell the magical aroma of her mother’s ugly vegetable soup. When she tastes it, the flavors dance in her mouth and laugh all the way down to her stomach. Next thing she knows, all the neighbors appear on their doorstep with flowers to trade for a bowl of soup. What’s really cool is that the following spring, everybody’s garden contains a mixture of both vegetables and flowers. 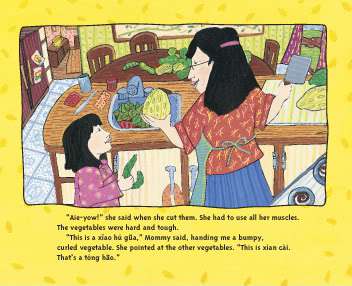 This story resonates on so many levels: finding beauty beneath the surface or in unexpected places, the joy of growing one’s own food and cultivating friendships based on mutual respect for cultural differences, and of course, there’s the mini lesson in Chinese cooking! The gouache illos are cheerful, busy, color-saturated and replete with pattern, telling detail, and a palpable childlike sensibility. I like how Grace’s trademark sky swirls were there from the very beginning — kind of like a secret promise of more good books to come, each one breaking new ground, blossoming in ever delightful ways.

It’s been so much fun revisiting this book, reflecting on all the books Grace has given us since then, and thinking, yes, this is where it all began. And there’s so much more to come (her third novel, Where the Mountain Meets the Moon, is officially out next week)!

For now, Congratulations, Grace, and Happy Anniversary to The Ugly Vegetables! I’m so glad it’s here with its new green jacket just waiting for another crop of young readers to harvest its treasures. Grace Lin fans will definitely want to add this classic collectible to their stashes. Like I always say, there’s only one first book, and this just happens to be an especially noteworthy introduction to one of the finest author/illustrators creating children’s books today. ♥

9 thoughts on “happy 10th anniversary to the ugly vegetables!”