Everyone can’t seem to get enough. Don’t worry, when your belly’s full, you can rest between platefuls by feasting on these warm, crispy, fluffy, savory, salty, lip-smacking picture books, and then you can fry up some more!

Today I’m serving up 8 of my favorites, one for each night of Hanukkah. There’s a little bit of everything in the mix — family and friends, folklore, legend, magic, humor, and miracles! Enjoy these heartwarming, satisfying stories and pass the applesauce!

♥ LOVE ME SOME LATKES PLATTER OF EIGHT ♥ 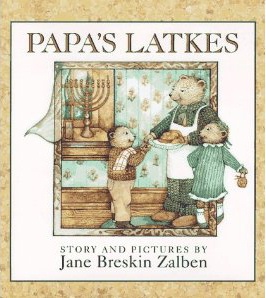 Even though Mama makes the best latkes in town, she doesn’t feel like making them this year, so Papa decides to have a latke contest. Beni and his cousins each try making them, but Rosie’s are lumpy, Max’s too oily, nobody will eat Leo’s strange shapes, Blossom’s are too brown, Goldie’s too raw, Molly’s too large, Sam’s too small. Finally Papa makes a big batch and they are just perfect! The family celebrates by singing, playing dreidel and opening presents, one of which is a shiny new frying pan for each of them. Warm, homey, cozy, and so adorable you’ll want to hug yourself. Who can resist bears dressed in vintage clothes? 🙂 Includes lyrics and music for “O Chanukah” and a recipe for Papa’s Latkes. 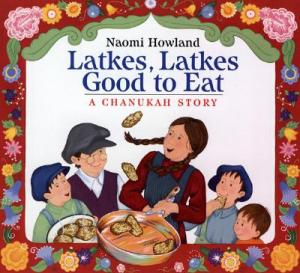 Sadie and her four younger brothers, who live on the outskirts of a tiny village in Russia, are poor, cold and always hungry. While gathering firewood one bitterly cold night, Sadie meets an old woman who needs help. Without a moment’s hesitation, she gives the woman her wood, and in exchange, the woman gives Sadie a frying pan that can cook up sizzling golden latkes on command! For days, Sadie and her brothers happily devour all the latkes they want. When Sadie goes out on the 8th night of Chanukah, she warns her brothers not to use the frying pan in her absence. Naturally, they can’t resist and begin to panic when they can’t make the pan stop. What to do with mountains and mountains of steaming hot latkes? Share with the entire village, of course! A fun, engaging story about generosity, greed and gratitude flavored with a bit of mischief and naughtiness. Includes a Note explaining the holiday and a recipe for Sadie’s Latkes. 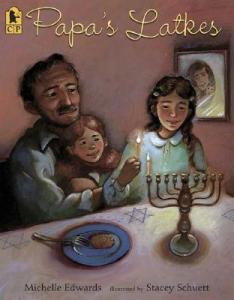 The joys of the holiday season are often tempered by missing those who are no longer with us to celebrate. In this tender, poignant story, Selma and her little sister Dora face their first Chanukah without Mama. When Papa comes home with a big bag of potatoes, Selma worries and wonders. Mama always made the latkes. Could they do it without her? They work together remembering all the little things Mama did, then Papa fries the latkes. Mama’s were always golden, light and crisp, but to Selma, Papa’s look like mud pies — fat, brown and lumpy. At the table, with only three plates instead of four, Selma breaks out in tears. Though it will never be the same, they realize they can continue to make latkes and celebrate Chanukah with their loving memories of Mama. Beautifully told and touching, with Schuett’s warm oil and acrylic paintings amplifying Papa’s exuberance and the family’s closeness. 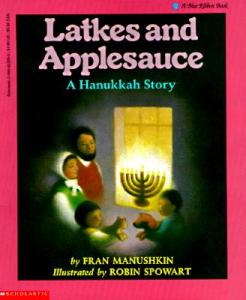 Latkes and Applesauce: A Hanukkah Story by Fran Manushkin and Robin Spowart (Scholastic, 1990).

A heartwarming story about a poor Eastern European Jewish family who manages to celebrate Hanukkah with feasting and gladness despite a scarcity of food. When a winter blizzard prevents young Ezra and Rachel from digging up potatoes for latkes and picking the apples for applesauce, the Menashe family sing their blessings, light the candles and sip soup together in their cozy home. Even with barely enough food for themselves, they take in a stray cat and dog, who later bring the miracle of Hanukkah as well as latkes and applesauce to their home. This feel good story about generosity, compassion, and honoring all of God’s creatures is accompanied by a Note explaining the holiday, a recipe for latkes and instructions for how to play dreidel. 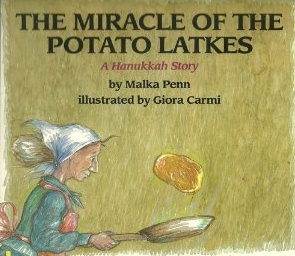 The Miracle of the Potato Latkes: A Hanukkah Story by Malka Penn and Giora Carmi (Holiday House, 1994).

Tante Golda makes the most delicious latkes in all of Russia and there’s nothing she enjoys more than cooking them for her friends and neighbors during Hanukkah. Ever generous, she doesn’t worry about running out of potatoes all winter because she firmly believes, “God will provide.” Somehow she always manages, as friends drop off a few potatoes now and then. But one year there is a severe drought and Golda discovers she only has one small potato left in her big barrel. What to do? It’s the first night of Hanukkah! She asks several of her neighbors for extra potatoes, but no one has any. She’s sad there probably won’t be a Hanukkah party but doesn’t lose faith. When a tired, hungry beggar comes knocking, she uses her last potato to make latkes for him and he says they are the best anywhere, a miracle. Soon one miracle leads to another, more potatoes appear and Golda is able to make Hanukkah last throughout the winter for all the people in the village. A lovely, joyous way to celebrate the ancient miracle of the oil that lasted for eight days, complete with Tante Golda’s Potato Latkes recipe. 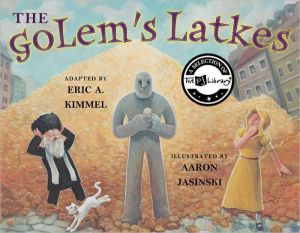 Who has not dreamed of having a skilled helper to protect us and do our bidding? Inspired by the original golem legend and The Sorcerer’s Apprentice, Kimmel has penned a funny, will-leave-you-wide-eyed-with-wonder story about Rabbi Judah Loew ben Bezalel of Prague, a prominent 16th century scholar who supposedly created a golem out of clay to defend the Jewish community in times of danger. On the first day of Hanukkah, Rabbi Judah is too busy to prepare for the holiday, so he asks his housemaid Basha to clean the house and make latkes for the party that night while he is away visiting the Emperor. Even though the Rabbi has never allowed anyone to use the golem when he wasn’t present, he tells Basha it’s okay for the golem to help her, reminding her to say, “Golem, enough,” when she wants him to stop. The golem is such a good worker that Basha takes advantage of him, making him do everything. While she is off visiting her friend Mary, she forgets the time and the golem continues to make mountains and mountains of latkes, enough to fill all the streets of the city. The moral of such a tale could warn against excess, but in the case of latkes, you can never have too many. Everyone shared them eating every last one, and in the spirit of the holiday, all was forgiven. What will the golem make next? 🙂 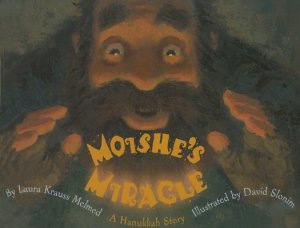 A wondrous, lyrically told story about a kind milkman rewarded for his generosity and his sharp-tongued, shrewish wife, who’s punished for her selfishness. Though he earns a meager living, Moishe is always willing to help his neighbors. One Hanukkah eve, his wife Baila scolds him because they have no money to buy the ingredients for latkes. Seeking a little peace of mind, Moishe retreats to the barn, where he is awakened by one of his cows talking to him. A stranger has left him a gift — an old frying pan which can produce as many latkes as he wishes as long as he’s the only one who uses it. He surprises Baila on the first night of Hanukkah with latkes so light they float on air! Moishe celebrates with his neighbors the next night with latkes galore, but the next day Baila does not heed Moishe’s warning and tries to use the pan for her own ends. Instead of latkes, she conjures up hairy demons. Baila is so frightened that for the first time she is rendered speechless and is forever transformed. Slonim’s pitch perfect, richly hued illustrations bathed in golden light enhance the Old World, folklorish elements of this heartwarming cautionary tale. Includes an endnote explaining Hanukkah and a glossary of Yiddish and Hebrew words. 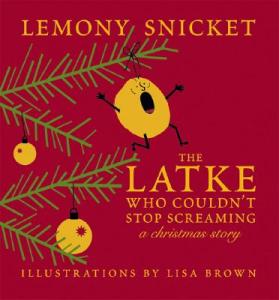 For all the latke stories that have been written, none so clearly gives the beloved potato pancake its well deserved chance to blow off steam, than this wickedly funny, subversive, strangely enlightening story. How would you feel if you were “slapped into a pan full of olive oil heated to a very high temperature?”

AAAHHHHHHHHHH!!! Precisely. You dash out the window, only to encounter a set of flashing colored lights who thinks you’re hash browns, a haughty candy cane with a scent of superiority, and a little pine tree who assumes you’re a present. AAAAHHHHHHHHHHH!!! Just a little understanding would be nice for a change, and to be known for who you are with your very own holiday, which is completely different from Christmas. Runaway pancake/gingerbread man meets a series of unfortunate events meets get me out of this winter wonderland meets love me and bite me. Grate for all ages, all faiths, with or without applesauce.

Enjoy this video with Daniel Handler (Lemony Snicket) and his wife and illustrator Lisa Brown:

♥ If you missed Love Me Some Latkes, Part One, click here.

Okay, you can go make and eat more latkes now. Do you know of any other good latke picture books?