If you’re craving a little Chinese, you’ve come to the right place. 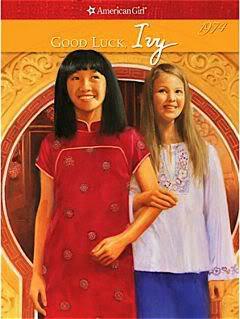 A perfect older brother, a mother in law school, a father working two jobs, and Julie moving away, often make Ivy feel invisible. A traumatic fall in a previous tournament has shaken her confidence, and she feels terrible after unintentionally hurting her grandparents’ feelings. And what about her report for Chinese school? How Ivy finds balance — both on the balance beam and in her life, makes for an engaging story sure to please young readers ages 8-12.

I especially like the warm family scenes featuring food! Ivy and her brother, Andrew, visit their grandparents, Gung Gung and Po Po, every Saturday morning for a steaming bowl of breakfast jook at their Chinese restaurant, the Happy Panda. But there are also scenes involving spaghetti, hamburgers, and Julie and Ivy’s invention: Chinese Almond Twisters — symbolizing the perfect blend of things American and Chinese, old traditions and new.

Today, Lisa is sharing a recipe for deep fried wonton, probably served at the Happy Panda, but more prominently featured in Stanford Wong Flunks Big-Time. Stanford’s grandmother, Yin-Yin, is famous for her dim sum (‘to touch the heart’), theorizing that if people’s mouths are full, they can’t fight. In a very touching scene, Stanford visits Yin-Yin in her nursing home, where she whips up a batch of wonton. He says, “I’ve missed Yin-Yin’s fried wontons almost as much as I’ve missed having her live with us.”

So, get into the spirit of Asian Pacific Heritage Month and fry up a batch of these. Of course, their flavor will be enhanced ten-fold if enjoyed alongside any one of Lisa’s fabulous books!

1. Heat a tablespoon of the cooking oil in a large skillet. Add garlic and cook until browned.
2. Add green onions and saute.
3. Add ground meat and cook until the meat is browned. Drain the oil.
4. In a separate container, mix the soy sauce and the sugar or honey. Pour over the meat and cook. When the meat is done, turn off the burner and set the skillet aside.
5. Lay out the wonton skins in rows.
6. Place one tablespoon of meat in the center of each wonton skin.
7. Dip a pastry brush or the back of a spoon into the beaten egg, then “paint” two adjoining edges of the wonton skins.
8. Fold the skin in half diagonally so it forms a triangle, and press the edges together to be sure they are sealed.
9. Heat the remaining cooking oil in a large pot.
10. Drop wontons into the heated oil and cook until golden brown. Be sure to turn them while they’re cooking so they don’t get overdone.
11. Drain and let cool.
12. Eat!