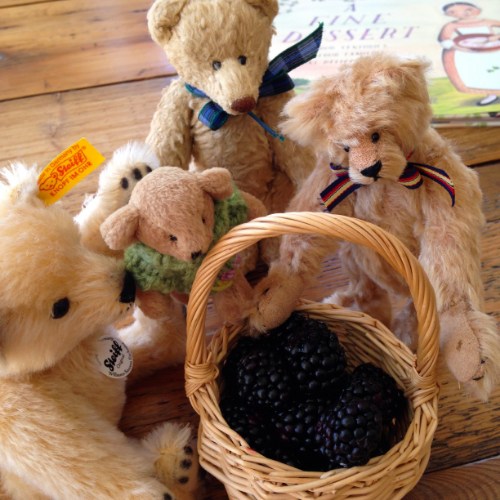 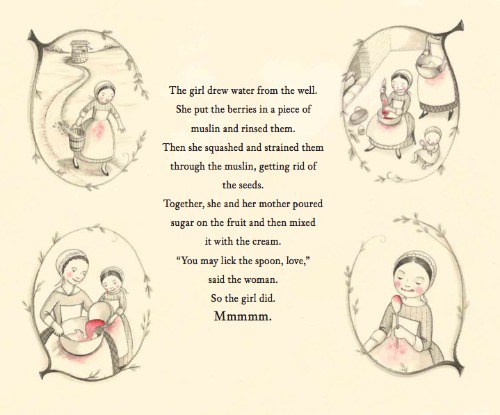 In the first vignette, a mother and daughter in Lyme, England (1710) pick wild blackberries, skim cream from their cow’s milk, whip the cream by hand with a twig whisk, draw water from the well to rinse the berries, press them through a muslin cloth to remove the seeds, then finally chill the mixture in a hillside ice pit.

In 1810, an enslaved mother and daughter pick berries from a plantation garden near Charleston, South Carolina. This time the milk is delivered from a local dairy and the girl whips the cream with a metal whisk and strains the berries through a tin sieve.

By 1910, a mother and daughter buy their berries at an open-air Boston market, consult a cookbook about whipping the pasteurized cream with a rotary beater, rinse the berries with water from a faucet, then chill their dish in a wooden ice box.

By the time we reach the present day (2010), a boy and his father from San Diego make the dessert with store-bought berries and organic cream, an internet recipe, an electric mixer and food processor, chilling their blackberry fool in the fridge.

Repetitive elements in text and illustration underscore the human connection to food and universal love for dessert, while seamlessly integrated factual detail defines significant changes in gender role and social identity. As Jenkins mentions in her Authors Note, until the end of the 20th century, females in the household did most (if not all) of the cooking and serving of meals. The enslaved mother and daughter in early 19th century South Carolina made and served the blackberry fool to their master’s family, but of course weren’t allowed to eat it.

I wrote about people finding joy in craftsmanship and dessert even within lives of great hardship and injustice — because finding that joy shows something powerful about the human spirit.

I like how Jenkins represents the 21st century with a father and son making dessert and enjoying a potluck meal with a diverse multigenerational group of friends. In these captivating slices of American history, exemplary families are depicted in an engaging and accessible way, inviting the reader to note differences and similarities, draw his/her own conclusions and hopefully ask questions and dig deeper. 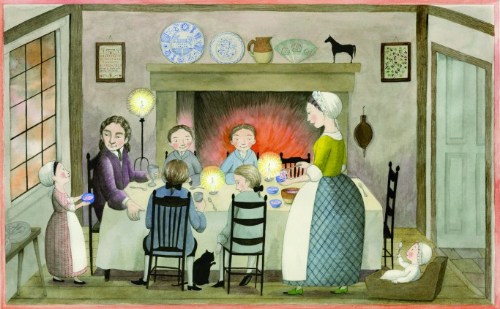 Sophie Blackall’s ink, watercolor and blackberry juice (!) illustrations give this story a classic feel and brim with interesting historical details (architecture, dress, interior furnishings, landscapes, personal effects) that draw us right into those period kitchens and dining rooms, making us wish we could sit down with those families to sample their fool. It goes without saying that all who read this scrumptious story will want to try the recipe at the end. 🙂 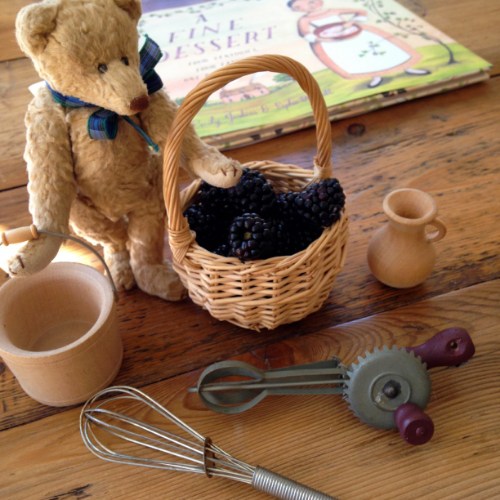 Fruit fools are among the oldest desserts in Western civilization, very nice that they’re originally “English,” and by their very name suggest fun and frivolity.

Some say “fool” comes from the French word “fouler,” which means to crush or press. Nothing could be simpler than combining puréed fruit, sugar and cream for a sweetly smooth refreshing Spring or Summer treat.

Though gooseberries remain the classic fool fruit, I’ve yet to try them. I’m just as happy using raspberries, strawberries or blackberries for my fools. And though traditional English fool called for custard, it seems whipped cream is the modern day favorite.

Not having a whisk made from bundled twigs in my baking arsenal, I used my trusty hand mixer to whip the cream. The blackberries came from Mexico by way of Whole Foods. The recipe calls for 1/2 cup sugar, which can be adjusted according to the sweetness (or tartness) of the fruit.

The Alphabet Soup furry kitchen helpers were ecstatic over the blackberries and enthusiastically licked the mixing bowl, spoon, beaters, countertop and my right cheek. It took all our willpower to wait out the 3-hour chilling time, but sweet anticipation ultimately heightened the deliciousness.

Never has a story refrain been so apt:

Find an adult to cook with you.

Mash the berries with a potato masher or a large fork. If you’ve got a food processor, you can use that. With clean hands, press the crushed berries through a sieve to remove the seeds. Sprinkle the fruit with 1/4 cup of the sugar. Stir.

In a separate bowl, mix together the remaining 1/4 cup of sugar, the vanilla and the cream. Using a whisk or whatever kind of beater you have, whip the mixture until it makes soft peaks, but not stiff ones.

Fold the sugared berries into the whipped cream. Taste it to see if it’s sweet enough. Add more sugar if you need it. There should be streaks of white and purple.

Refrigerate for 3 hours or more.

Eat! And don’t forget to lick the bowl.

The publisher has generously offered a brand new copy of A Fine Dessert for one lucky Alphabet Soup reader. For a chance to win, simply leave a comment at this post mentioning your favorite dessert no later than midnight (EST) Sunday, March 1, 2015. Giveaway open to U.S. residents only, please. Good Luck!

This post is being linked to Beth Fish Read’s Weekend Cooking, where all are invited to share their food-related posts. Put on your best bibs and aprons, and come join the fun!