“I have always longed and longed to own a sweet-shop. The sweet-shop of my dreams would be loaded from top to bottom with Sherbet Suckers and Caramel Fudge and Russian Toffee and Sugar Snorters and Butter Gumballs and thousands and thousands of other glorious things like that.” (The Giraffe and the Pelly and Me by Roald Dahl)

I can’t think of any other children’s author who invented quite as many wildly imaginative fantasy treats for his stories — from lickable wallpaper to the pickled spines of porcupines to hot noodles made from poodles on a slice of garden hose. I’m convinced I would have done much better in school if I had had some candy-coated pencils for sucking in class. Perhaps the reason I’m so obsessed with food now is because I grew up without mosquitoes’ toes and wampfish roes most delicately fried. Good theory, in any case. ☺

From all accounts, Roald was a lifelong foodie. In her introduction to Roald Dahl’s Even More Revolting Recipes, Felicity Dahl mentions that many of the letters Roald wrote to his mother while he was in boarding school included a request for food. It was quite a challenge fulfilling his every craving, especially when it involved raw eggs. He also asked her to send him a Primus stove so he could cook some of those raw ingredients.

You see we aren’t allowed to cook supper on the fire on weekdays. But Michael and I had put a small tin of Peasoup in front of the fire to heat — one hour before supper, which was quite within the law. When I came to take it off, the tin was bulging  at both ends, hellish pressure inside owing to the steam of the boiling soup. I covered it with an umbrella and pierced it from behind — then took away the umbrella and stood at a safe distance; an enormous jet of steam and pea soup shot out, and continued to shoot for about 2 minutes — all over the study, the place was covered with condensing pea-soup.

Love it! Also the fact that Dahl and his schoolmates sometimes served as product testers for Cadbury’s Chocolates, leading him to dream about working in a chocolate manufacturer’s inventing room someday. He never got his wish, but fulfilled his dream by writing one of the most beloved children’s novels ever.

In honor of Dahl’s 95th birthday today, I decided to read one of his lesser known works and make one of the foods from it. The Giraffe and the Pelly and Me is a short novel, published late in his career (1985). Young Billy longs to open a sweet-shop in an old abandoned house near his home. One day the “For Sail” sign is replaced by “Soled,” and he meets the buyers — a giraffe, pelican and monkey who comprise the Ladderless Window-Cleaning Company.

No need for special equipment; the giraffe’s telescopic neck beats any ladder, the pelican’s expanding beak is a great bucket, and the monkey’s good at cleaning. When they receive an invitation to wash all 677 windows of Hampshire House, Billy goes along as their Business Manager. Their first job is quite a coup, as they help the Duke, who just happens to be the richest man in England, catch a burglar. As a reward, the Duke gives them what they long for most — in no time at all, the old house is fixed up and Billy gets his sweet-shop. On Grand Opening Day, Billy gives each of his friends a special sweet.

To the Pelican I gave a big bag of Pishlets. Pishlets, as you probably know, are bought by children who are unable to whistle a tune as they walk along the street but long to do so. They had a splendid effect upon the Pelican, for after he had put one of them into his beak and chewed it for a while, he suddenly started singing like a nightingale. This made him wildly excited because Pelicans are not song-birds.

The Pishlets were easy to make and quite tasty (not revolting in the least, but dare I say could even verge on being “healthy” – *shudder*). I did expect them to be more like a chewy granola bar. 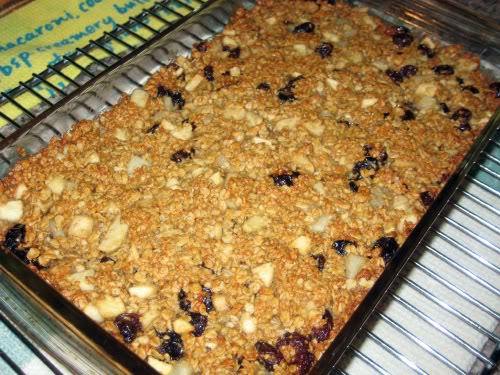 The recipe does not specify the size of pan to bake them in (I used a 7″ x 11″). Perhaps if I had used a larger pan, they would have baked up crisper. Still, they’re perfect for today — help yourself to as many as you like and you’ll be able to sing “Happy Birthday” like a song-bird.

1. Grease a baking pan with butter or shortening.

3. Melt the butter, sugar and baking soda in a saucepan over low heat.

4. While the butter mixture is melting, peel the apple and pear and chop them into bite-size chunks.

5. Add the oats, raisins, dried cherries, apple, and pear to the saucepan and mix well.

6. Spoon into the baking pan and spread evenly.

8. Let it cool down and then cut into squares.

I just ordered a copy of the cookbook Dahl wrote with his wife Felicity (Liccy): Memories with Food at Gipsy House (Viking, 1991). Hope to make one of the recipes to top off Roald Dahl Month. Meanwhile, take another look at his books so you can feast on plushnuggets, boiled slobbages, glumptious globgobblers, tongue rakers, spitsizzlers, mudburgers, and eatable marshmallow pillows — all washed down with liquid chocolate mixed by waterfall, of course.

♥ Cool article in the London Times by Damian Whitworth.

♥ “Roald Dahl and the Darkness Within” by Tom de Castella for BBC News.

♥ Oddball tidbits: Dahl kept a jar of wine gums by his bedside at all times; items on the side table in his writing hut include his hip bone and a big ball of foil from Kit Kat wrappers; his favorite shop was the fishmonger.

“And above all, watch with glittering eyes the whole world around you because the greatest secrets are always hidden in the most unlikely places. Those who don’t believe in magic will never find it.” ~ Roald Dahl